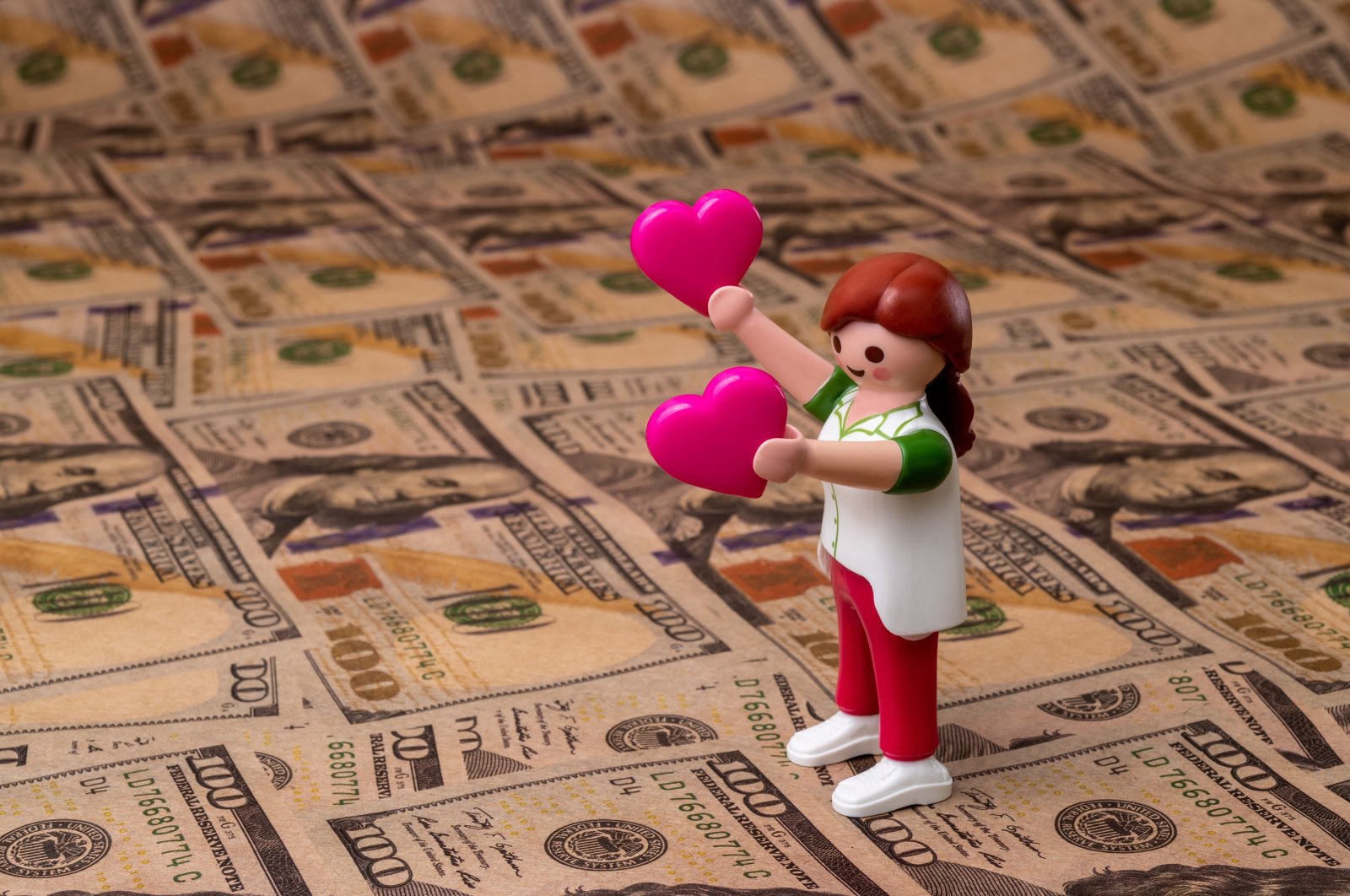 A plastic figurine of a woman holds in each hand a pink heart symbol against a background of American dollar bills. (Shutterstock Photo)
by DAILY SABAH Jan 27, 2021 9:55 am
RECOMMENDED

It is a debate as old as time itself: can money buy you happiness? People, philosophers, psychologists, scientists and researchers have pondered that question for ages, never reaching a consensus and remaining split down the middle. Contemporary research, however, may provide an answer to the age-old question after all, at least for modern times.

A recent study by Matthew Killingsworth, of the University of Pennsylvania’s Wharton School, published in the Proceedings of the National Academy of Sciences (PNAS), drew on 1,725,994 experience-sampling reports from 33,391 employed adults in the United States. The results from the study showed that both experienced and evaluative well-being, meaning people's day-to-day emotions and their satisfaction, respectively, increased in correlation with income levels.

The study was completed with the help of smartphones. Using a website that participants signed up through, researchers developed a large-scale experience sampling method where participants would be prompted to answer questions about their experiences.

The participants' emotions were measured with the question, “How do you feel right now?” The answers they could give ranged from “very bad” to “very good.” Meanwhile, to measure their satisfaction, participants were prompted with the question, “Overall, how satisfied are you with your life?” This time the available answers ranged between “not at all” and “extremely.” Finally, to establish each participant's household income level, researchers would ask, “What is your total annual household income before taxes?”

After collecting nearly 2 million responses to these questions, the researchers gathered and analyzed the data. They found that higher incomes were robustly associated with both feeling better day-to-day and being more satisfied with life overall, no matter the income level.

The study also said that well-being increased as much with higher income levels as it did on lower ones, as opposed to a previous 2010 paper by psychologist Daniel Kahneman and economist Angus Deaton, which indicated that emotional well-being plateaued after a household income of about $75,000 a year, around $90,000 in today’s dollars. According to Killingsworth's study, money keeps bringing happiness, even after reaching dizzying heights.

Although Killingsworth provides an answer to the million-dollar question, the jury is still out on the debate. A 2016 study by Cassie Mogilner and Michael I. Norton suggests that rather than the amount of money an individual earns, how they spend it is more important for their happiness.

Sometimes a steep rise in income brings about unforeseen problems and challenges. This is most keenly observed with lottery winners. History has shown winners of large lotteries spiraling into depression or getting consumed by materialism.

Perhaps American comedian Paul Reiser best sums it up. “Money can’t buy you happiness, but it can buy you a car. And with that car, you could go out and try to get happy,” he said when talking to Marketplace, a nonprofit news organization. “Also, you could buy the names of people who connect you to happy-making things. So, it’s not a bad thing,” he added

“People look down upon money, no, money can’t buy happiness, but lack of money can buy unhappiness. I’m going to get that printed up on a mug.”