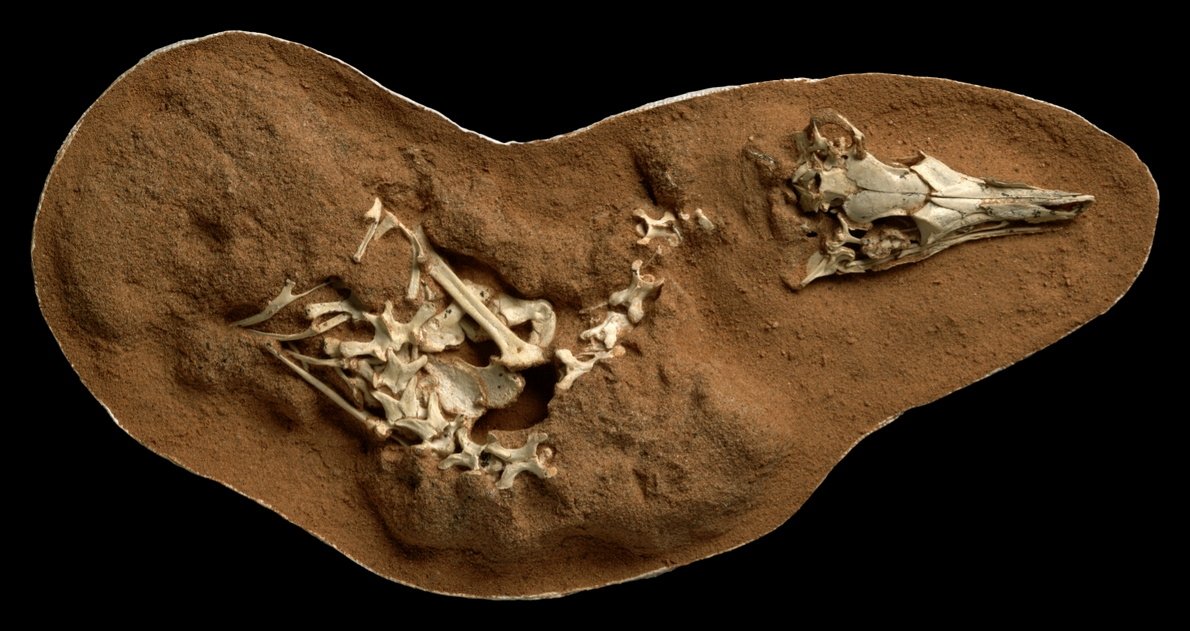 The fossilized skeleton of the small bird-like dinosaur Shuvuuia deserti is seen in this undated handout image. (Reuters Photo)
by Reuters May 07, 2021 9:43 am
RECOMMENDED

A thorough analysis of a nocturnal dinosaur called Shuvuuia deserti found out that the pint-sized predator, which inhabited the deserts of today's Mongolia and northern China 70 million years ago, had some fascinating qualities that made it a lethal night hunter: superb hearing and excellent night vision.

Scientists said on Thursday an examination of a ring of bones surrounding the pupil and a bony tube inside the skull that houses the hearing organ showed that Shuvuuia deserti, boasted visual and auditory capabilities akin to a barn owl, indicating it could hunt in total darkness.

Their study, published in the journal Science, showed that predatory dinosaurs overall generally possessed better-than-average hearing, helpful for hunters, but had vision optimized for daytime. In contrast, Shuvuuia (pronounced shu-VOO-ee-ah) loved the nightlife.

Shuvuuia was a pheasant-sized, two-legged Cretaceous Period dinosaur weighing about as much as a small house cat. Lacking the strong jaws and sharp teeth of many carnivorous dinosaurs, it had a remarkably bird-like and lightly built skull and many tiny teeth like grains of rice.

Its mid-length neck and small head, coupled with very long legs, made it resemble an awkward chicken. Unlike birds, it had short but powerful arms ending in a single large claw, good for digging.

"Shuvuuia might have run across the desert floor under cover of night, using its incredible hearing and night vision to track small prey such as nocturnal mammals, lizards and insects,” said paleontologist Jonah Choiniere of the University of the Witwatersrand in South Africa, the study's lead author.

“With its long legs it could have rapidly run down such prey, and used its digging forelimbs to pry prey loose from any cover such as a burrow," Choiniere added.

"It's such a strange animal that paleontologists have long wondered what it was actually doing," added paleontologist Roger Benson of the University of Oxford in England, who helped lead the study.

The researchers looked at a structure called the lagena, a curving and finger-like sac that sits in a cavity in the bones surrounding the brain and is connected to the part of the ear that lets reptiles and birds keep balance and move their heads while walking. Acute hearing helps nocturnal predators locate prey. The longer the lagena, the better hearing an animal has.

The barn owl, a proficient nocturnal predator even in pitch-black conditions, has the proportionally longest lagena of any living bird. Shuvuuia is unique among predatory dinosaurs with a hyper-elongated lagena, almost identical in relative size to a barn owl's.

The researchers also looked at a series of tiny bones called the scleral ring that encircles the pupil of the eye. It exists in birds and lizards and was present in the ancestors of today's mammals. Shuvuuia had a very wide scleral ring, indicating an extra-large pupil size that made its eye a specialized light-capture device.

The study found that nocturnality was uncommon among dinosaurs, aside from a group called alvarezsaurs to which Shuvuuia belonged. Alvarezsaurs had a nocturnal vision very early in their lineage, but super-hearing took more time to evolve.

"Like many paleontologists, I once considered that nighttime in the age of dinosaurs was when the mammals came out of hiding to avoid predation and competition. The importance of these findings is that it forces us to imagine dinosaurs like Shuvuuia evolving to take advantage of these nocturnal communities," Choiniere said.

Benson added, "This really shows that dinosaurs had a wide range of skills and adaptations that are only just coming to light now. We find evidence that there was a thriving 'nightlife' during the time of dinosaurs."