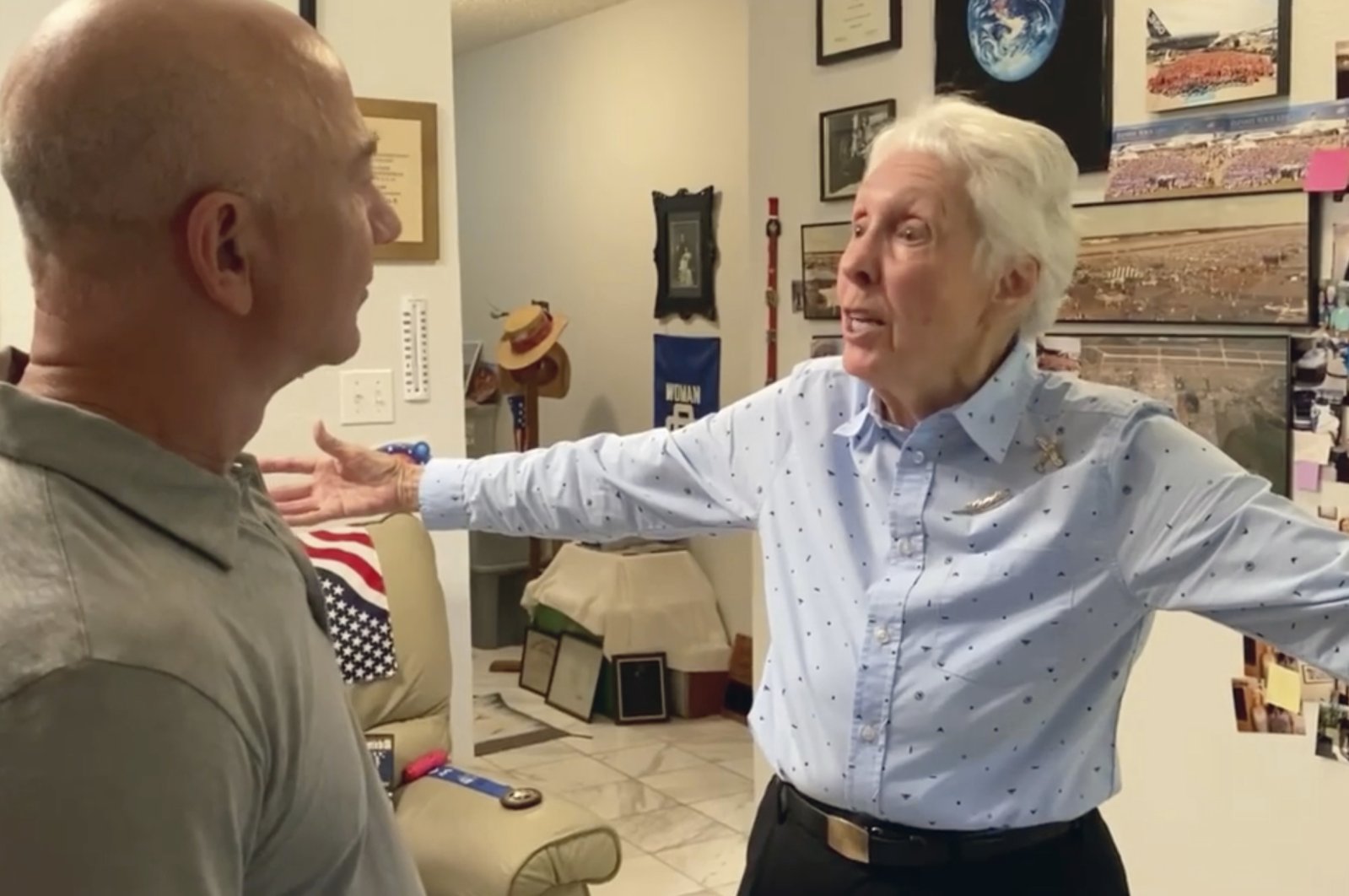 Wally Funk was only 22 years old when she aced the astronaut tests but was barred from the experience because she was a woman. Now, 60 years later, the barrier-breaking, pioneering woman pilot will rocket into space alongside Jeff Bezos in just three weeks, on the first crewed spaceflight for the billionaire's company Blue Origin as "honored guest," the firm announced Thursday.

The trip is 60 years overdue for Funk, who was one of the Mercury 13, the first women trained to fly to space from 1960-1961, but excluded because of their gender. Funk was the youngest of the so-called Mercury 13 in the early 1960s.

On July 20, she will become the oldest person ever to go to space when she takes part in the journey aboard the New Shepard launch vehicle along with Bezos, his brother Mark and one other traveler who paid $28 million at auction for the seat.

The video shows Bezos describing the trip to Funk, and then asking her what would be the first thing she said after landing.

"I would say, 'Honey, that was the best thing that ever happened to me!'" replies an exuberant Funk, throwing her arms around the laughing tech mogul.

Funk recalled her time in the Mercury 13 program, an unofficial, privately funded program that put women through the same training and tests as the male astronauts undergoing the official NASA program.

"They told me that I had done better and completed the work faster than any of the guys," Funk, the youngest woman to pass the program, says in the video.

"So I got ahold of NASA, four times. I said I want to become an astronaut, but nobody would take me. I didn't think that I would ever get to go up."

She said people told her "Wally, you're a girl, you can't do that."

"I said guess what, doesn't matter what you are, you can still do it if you want to do it."

The oldest person to have traveled in space so far is US astronaut John Glenn, who flew in 1998 at the age of 77 on the space shuttle Discovery.

On its own, age is "not a limiting factor" for going to space, Glenn King, director of the space training program at the Nastar Center, a private company that partners with major industry players, told Agence France-Presse (AFP).

"It's really up to the overall health of each person," he said.

He himself trained an 88-year-old astronaut candidate, including in a centrifuge replicating the g-force corresponding to that to which passengers will be exposed. "He did very well."

The first woman in space was Russia's Valentina Terechkova in 1963, two decades before the first American woman, Sally Ride in 1983.

The Bezos brothers and Funk, who was also the National Transportation Safety Board's first female air safety inspector and has logged 19,600 hours of flight time as a pilot, will be joined by the unnamed winner of the online auction who paid for a seat.

Taking off from a desert in western Texas, the New Shepard trip will last 10 minutes, four of which passengers will spend above the Karman line that marks the recognized boundary between Earth's atmosphere and space.

The passengers will then be able to float weightlessly for a few minutes and observe the curvature of the Earth.

Then the capsule will begin a free fall back to Earth, braked by three large parachutes and retrorockets before landing back in Texas.

New Shepard has successfully carried out more than a dozen uncrewed test runs from its facility in Texas' Guadalupe Mountains.

The reusable suborbital rocket system was named after Alan Shepard, the first American in space 60 years ago.

The automated capsules with no pilot have six seats with horizontal backrests placed next to large portholes, in a futuristic cabin with swish lighting.

Funk has also bought a ticket to fly into space on Branson's rival Virgin Galactic spacecraft. In 2019 he called her an "inspiration" and a "proud @VirginGalactic future astronaut," but Bezos and Blue Origin beat him to the punch.