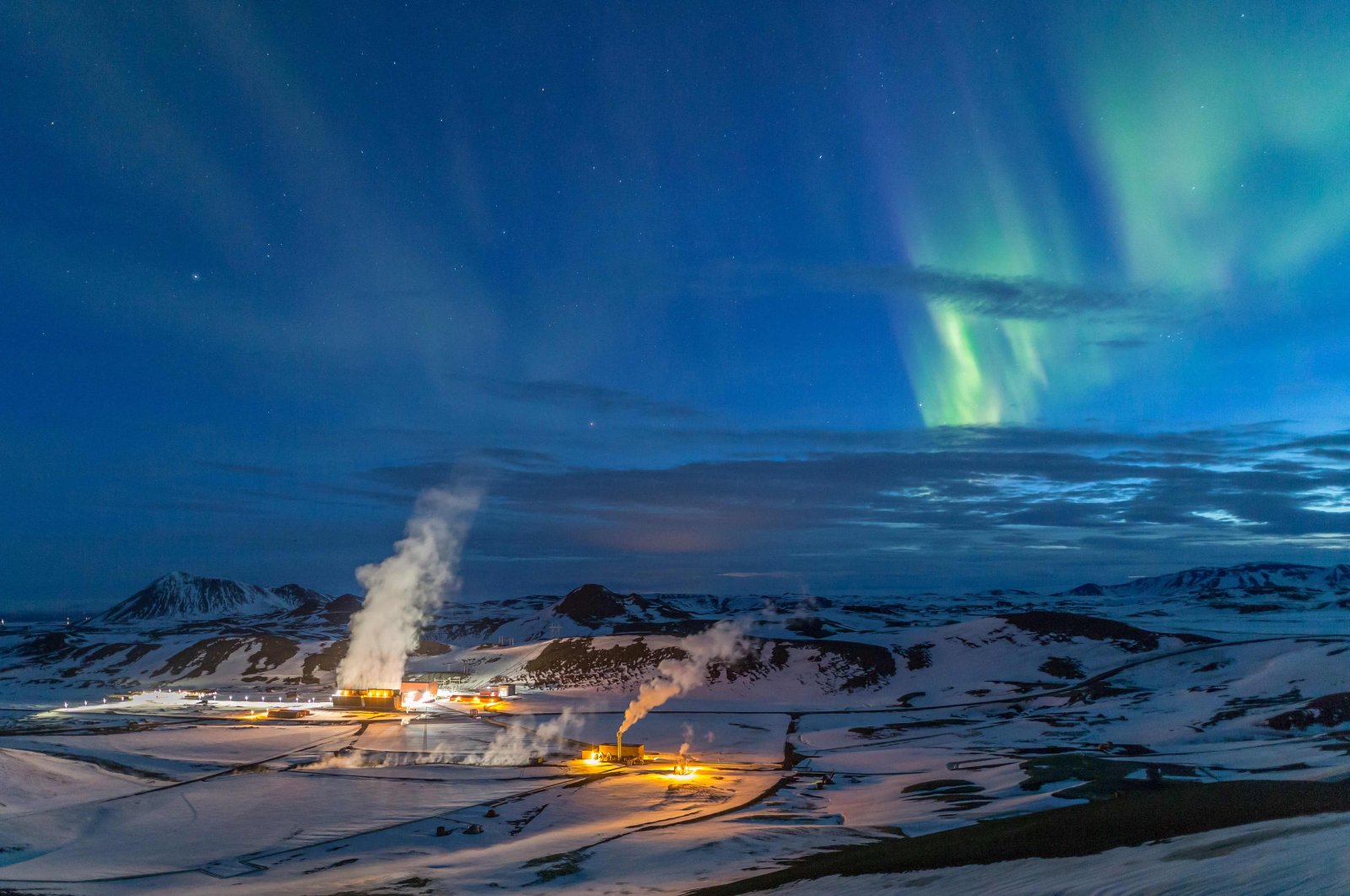 This handout photo made available by Iceland's National Power Company Landsvirkjun on Nov. 23, 2021 shows Krafla geothermal power plant near the Krafla volcano as northern lights can be seen in the background, in northern Iceland, April 14, 2018. ( LANDSVIRKJUN via AFP)
by French Press Agency - AFP Nov 26, 2021 12:42 pm
RECOMMENDED

Iceland is home to more than a hundred volcanos, but Krafla volcano is one of the countries most awe-inspiring natural wonders. It is known for its large crater lake of turquoise water, plumes of smoke and sulphurous bubbling of mud and gases.

Here, in the country's northeast, a team of international researchers is preparing to drill two kilometers (1.2 miles) into the heart of the volcano, a Jules Verne-like project aimed at creating the world's first underground magma observatory.

Launched in 2014 and with the first drilling due to start in 2024, the $100-million project involves scientists and engineers from 38 research institutes and companies in 11 countries, including the United States, Britain and France.

The "Krafla Magma Testbed" (KMT) team hopes to drill into the volcano's magma chamber. Unlike the lava spewed above ground, the molten rock beneath the surface remains a mystery.

The KMT is the first magma observatory in the world, Paolo Papale, volcanologist at the Italian national institute for geophysics and volcanology INGV, tells Agence France-Presse (AFP).

"We have never observed underground magma, apart from fortuitous encounters while drilling" in volcanoes in Hawaii and Kenya, and at Krafla in 2009, he says.

They also hope to further knowledge about volcano prediction and risks.

"Knowing where the magma is located... is vital" in order to be prepared for an eruption. "Without that, we are nearly blind," says Papale.

Not so deep down

Like many scientific breakthroughs, the magma observatory is the result of an unexpected discovery.

In 2009, when engineers were expanding Krafla's geothermal power plant, a bore drill hit a pocket of 900 degrees Celsius (1,650 degrees Fahrenheit) magma by chance, at a depth of 2.1 kilometers.

Smoke shot up from the borehole and lava flowed nine meters (29.5 feet) up the well, damaging the drilling material.

But there was no eruption and no one was hurt.

Volcanologists realized they were within reach of a magma pocket estimated to contain around 500 million cubic meters (about 17.6 billion cubic feet).

Scientists were astonished to find magma this shallow – they had expected to be able to drill to a depth of 4.5 kilometers before that would occur.

Studies have subsequently shown the magma had similar properties to that from a 1724 eruption, meaning that it was at least 300 years old.

"This discovery has the potential to be a huge breakthrough in our capability to understand many different things," ranging from the origin of the continents to volcano dynamics and geothermal systems, Papale enthuses.

The chance find was also auspicious for Landsvirkjun, the national electricity agency that runs the site.

That close to liquid magma, the rock reaches temperatures so extreme that the fluids are "supercritical," a state in-between liquid and gas.

The energy produced there is five to 10 times more powerful than in a conventional borehole.

During the incident, the steam that rose to the surface was 450 degrees celcius, the highest volcano steam temperature ever recorded.

Two supercritical wells would be enough to generate the plant's 60 megawatt capacity currently served by 18 boreholes.

Landsvirkjun hopes the KMT project will lead to "new technology to be able to drill deeper and to be able to harness this energy that we have not been able to do before," the head of geothermal operations and resource management, Vordis Eiriksdottir, said.

But drilling in such an extreme environment is technically challenging. The materials need to be able to resist corrosion caused by the super hot steam.

And the possibility that the operation may trigger a volcanic eruption is something "one would naturally worry about," says John Eichelberger, a University of Alaska Fairbanks geophysicist and one of the founders of the KMT project.

But, he says, "this is poking an elephant with a needle."

"In total, a dozen holes have hit magma at three different places (in the world) and nothing bad happened."