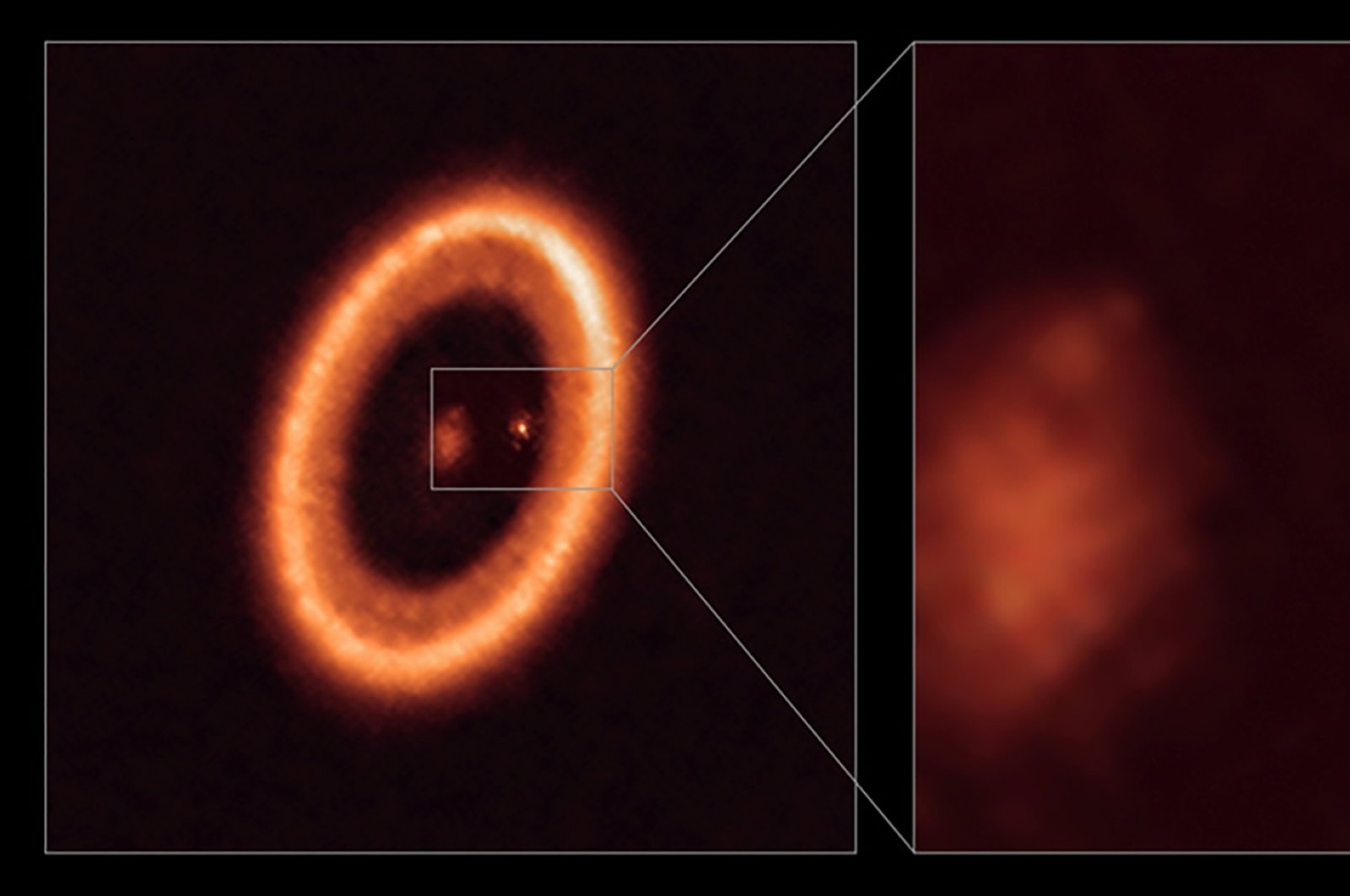 An undated image, taken with the Atacama Large Millimeter/submillimeter Array (ALMA), in which the European Southern Observatory is a partner, shows wide (L) and close-up views of the moon-forming disc surrounding PDS 70c, a young Jupiter-like planet nearly 400 light-years away. (Reuters Photo)
by Reuters
Jul 25, 2021 7:48 pm

For the first time in history, scientists have been able to spot and clearly identify a disk of gas and dust circling a Jupiter-like planet outside our solar system, thus creating a moon-forming region that could in time host three moons that are as massive as the one that orbits the Earth. The discovery has been hailed as an exciting development that could help reveal how planets and moons are formed.

The researchers used the ALMA observatory in Chile's Atacama desert to detect the disk of swirling material accumulating around one of two newborn planets seen orbiting a young star called PDS 70, located a relatively close 370 light years from Earth. A light year is the distance light travels in a year, about 9.5 trillion kilometers (5.9 trillion miles).

It is called a circumplanetary disk, and it is from these that moons are born. The discovery, the researchers said, offers a deeper understanding about the formation of planets and moons.

More than 4,400 planets have been discovered outside our solar system, called exoplanets. No circumplanetary disks had been found until now because all the known exoplanets resided in "mature" – fully developed – solar systems, except the two infant gas planets orbiting PDS 70.

"These observations are unique – so far – and have been long waited for, in order to test the theory of planet formation and directly observe the birth of planets and of their satellites," said astronomer Myriam Benisty of the University of Grenoble, who led the study published Thursday in the Astrophysical Journal Letters.

In our solar system, the impressive rings of Saturn, a planet around which more than 80 moons orbit, represent a relic of a primordial moon-forming disk, said study co-author Stefano Facchini of the European Southern Observatory.

The orange-colored star PDS 70, roughly the same mass as our sun, is about 5 million years old – a blink of the eye in cosmic time. The two planets are even younger.

Both planets are similar (although larger) to Jupiter, a gas giant that is our solar system's biggest planet. It was around one of the two planets, called PDS 70c, that a moon-forming disk was observed. Researchers previously had found initial evidence of a disk around this planet, but now have confirmed it.

Both planets are "still in their youth," Facchini said, and are at a dynamic stage in which they are still acquiring their atmospheres. PDS 70c orbits its star at 33 times the distance of the Earth from the sun, similar to the planet Neptune in our solar system. Benisty said there are possible additional so-far undetected planets in the system.

Stars burst to life within clouds of interstellar gas and dust scattered throughout galaxies. Leftover material spinning around a new star then coalesces into planets, and circumplanetary disks surrounding some planets similarly yield moons.

"In this scenario, small dust grains, coated in ice, gradually grow to larger and larger sizes through successive collisions with other grains. This continues until the grains have grown to a size of a planetary core, at which point the young planet has a strong enough gravitational potential to accrete gas which will form its atmosphere," Teague said.

Some nascent planets attract a disk of material around them, with the same process that gives rise to planets around a star leading to the formation of moons around planets.

The disk around PDS 70c, with a diameter about equal to the distance of the Earth to the sun, possesses enough mass to produce up to three moons the size of Earth's moon. It is unclear how many will form, if any.