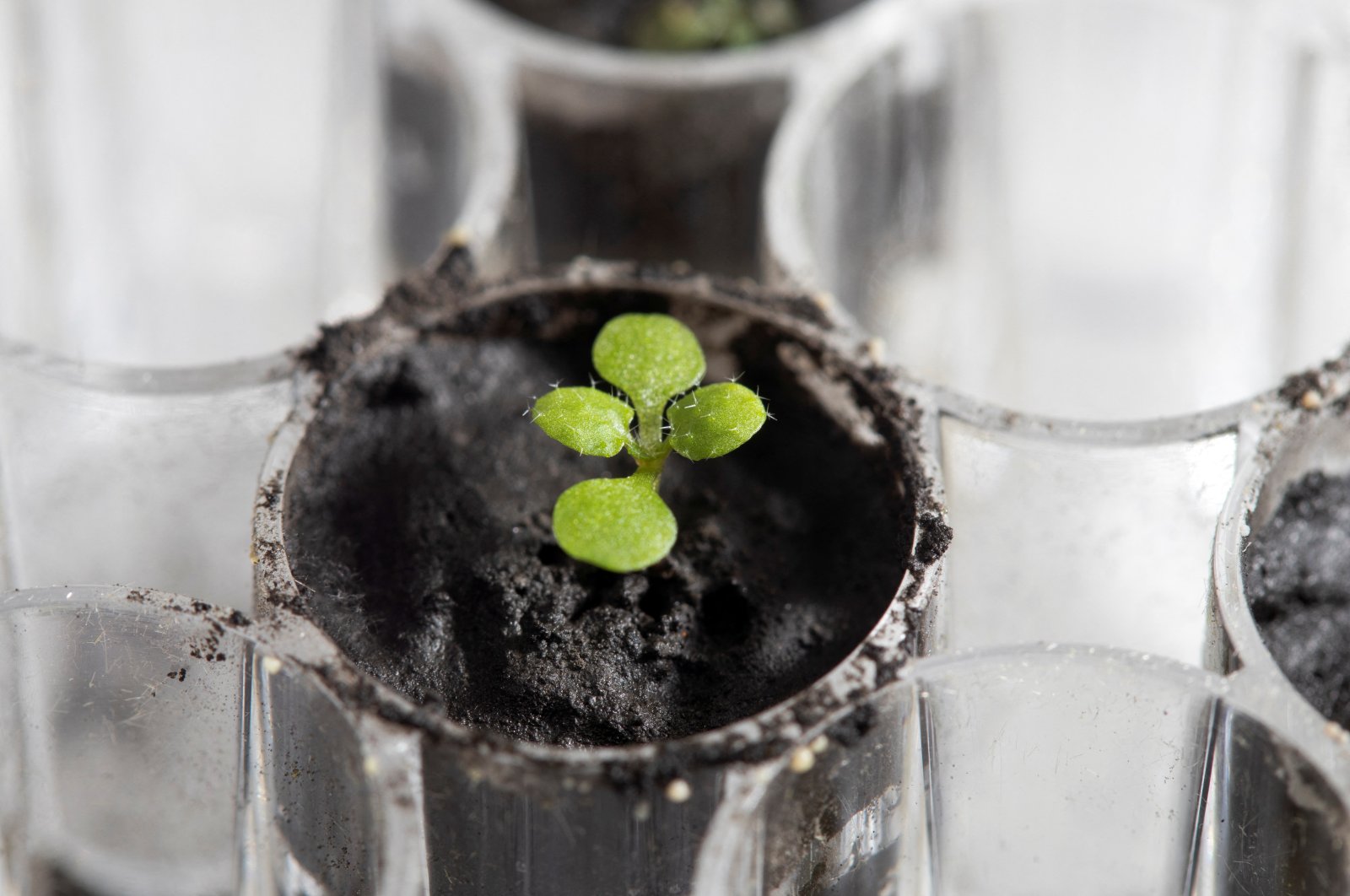 The plant species Arabidopsis thaliana is seen at a University of Florida laboratory growing in a small amount of lunar regolith – soil from the moon – for about two weeks, U.S. (Tyler Jones/UF/IFAS via Reuters)
by Agencies May 13, 2022 5:32 pm
RECOMMENDED

American scientists have successfully grown plants in soil samples collected from the moon decades ago and brought to earth by astronauts in the Apollo program, leading to hopes for agricultural activities in space.

The ground-breaking experiment, detailed in the journal Communications Biology on Thursday, has given researchers hope that it may be possible to grow plants directly on the moon one day.

That would save future space missions much hassle and expense, facilitating longer and farther trips. However, according to the study's University of Florida authors, much remains to be studied on the topic, and they intend to leave no stone unturned.

"This research is critical to NASA's long-term human exploration goals," said Bill Nelson, the head of the U.S. space agency. "We'll need to use resources found on the moon and Mars to develop food sources for future astronauts living and operating in deep space," he added.

For their experiment, the researchers used just 12 grams (a few teaspoons) of lunar soil collected from various spots on the moon during the Apollo 11, 12 and 17 missions.

Lunar "regolith," with its sharp particles and lack of organic material, differs greatly from Earth soil, so it was unknown whether seeds would germinate.

In tiny thimble-sized pots, they placed about a gram of soil (called "regolith") and added water, then the seeds. They also fed the plants a nutrient solution every day.

The researchers chose to plant arabidopsis thaliana, a relative of mustard greens, because it grows easily and, most importantly, has been studied extensively. Its genetic code and responses to hostile environments, even in space, are well-known.

As a control group, seeds were also planted in soil from Earth as well as samples imitating lunar and Martian soil. The result: After two days, everything sprouted, including the lunar samples.

Every seed germinated and there were no outward differences at the early stages of growth between those sown in the regolith – composed mostly of crushed basalt rocks – and seeds sown for comparative reasons in volcanic ash from Earth with similar mineral composition and particle size.

"Every plant – whether in a lunar sample or in a control – looked the same up until about Day Six," Anna-Lisa Paul, lead author of the paper, said in a statement.

But after that, differences started to appear: the plants in the lunar samples grew more slowly and had stunted roots.

After 20 days, the scientists harvested all the plants and ran studies on their DNA. Their analysis showed that the lunar plants had reacted similarly to those grown in hostile environments, such as soil with too much salt, or heavy metals.

Study co-leader Rob Ferl, a University of Florida assistant vice president for research, said he felt "joy at watching life do something that had never been done before."

In the future, scientists want to understand how this environment could be made more hospitable.

NASA is preparing to return to the moon as part of the Artemis program, with a long-term goal of establishing a lasting human presence on its surface.