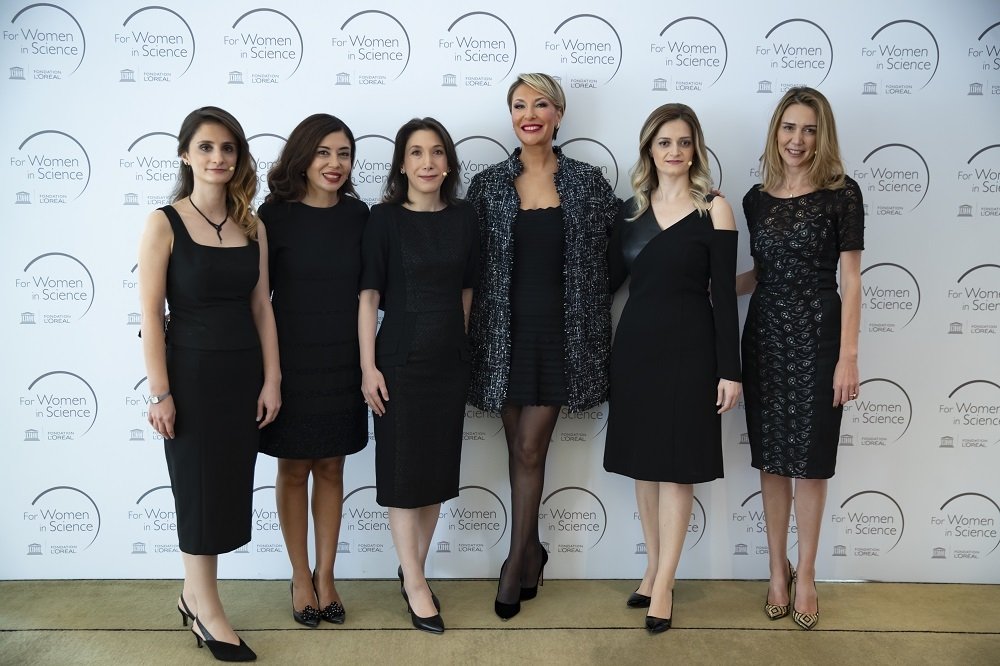 The world needs science and science needs women more than ever.

That was the motto of this year's L'Oreal-UNESCO for Women in Science program, which has been supporting female scientists from all over the world for more than 20 years. Each year, the program supports more than 250 talented young female researchers. Through its 52 regional and national programs, the L'Oreal Foundation and UNESCO support them at a crucial period in their careers, during their thesis or post-doctoral studies.

Globally the program has been taking place since 1998, while in Turkey it was held for the first time in 2003. Since then, more than 3,000 female scientists, including 112 in Turkey, have been given financial support to help them turn their scientific projects into reality, and some of them have also been awarded the Nobel Prize.

The applicants have to go through a few steps to qualify for the program, Country General Manager at L'Oreal Turkey Sinem Sandıkçı Gökçen told Daily Sabah. They first have to enter a competition held locally in each country. Winners of the competition are included in the global fellowship program.

For example, in Turkey, L'Oreal UNESCO Fellowships For Women in Science, in partnership between L'Oreal Turkey and the Turkish National Commission for UNESCO, offers awards to promote, enhance and encourage the contribution of women pursuing their research careers in Turkey in the fields of life and material sciences.

The winners of the local program take part in the L’Oreal-UNESCO For Women in Science International Awards that are presented every year to five outstanding female scientists, one from each of the following regions: Africa and the Arab States, Asia and the Pacific, Europe, Latin America and the Caribbean, and North America in recognition of their scientific accomplishments.

Working in the physical, formal and life sciences on five different continents, these eminent female researchers are helping to change the world through their discoveries and are also role models for younger generations of female researchers who want to pursue their scientific careers and break the glass ceiling, UNESCO says.

“One of the main goals of the program is to empower women and give them the value they deserve and the place they deserve in society. Therefore, when you look at science, it is one of the areas where gender inequality is experienced at the highest level. If we take a look at the statistics, we see that an equal number of boys and girls choose to study science and have careers in this field, however, the number gradually drops in the process. Only 33% of researchers and only 3% of Nobel laureates are women,” Gökçen explained.

“We have science in 'our DNA.' That's why we wanted to combine these two and provide real support to women scientists. That is why we have been continuing this project for many years,” she added.

“Women are very creative and innovative, they bring different perspectives, and we think that women should be involved in the solving of world problems as much as men are. That's why we provide financial support so that they can bring the projects to life, and we try to encourage them to be role models for younger generations,” she said.

Gökçen highlighted that L’Oreal has a few more social projects that are being implemented this year. One of them is named “Stand up against street harassment.”

As harassment is one of the biggest problems of modern women, this project is very important for the company, she added. The project includes very simple training on what you should do if you are exposed to or witness any kind of harassment.

“Our aim is both to raise awareness on this issue and to encourage people to be a little more courageous and intervene in this matter,” she said, adding that sometimes we don’t really know what to do in these cases to protect ourselves or people around us. Another project is about a global sustainability program called “L'Oreal for the future.”

The winners of the Turkish leg of the "For Women in Science" program, which has been implemented for the 19th time in Turkey through the cooperation of L'Oreal Turkey and the UNESCO Turkish National Commission, were announced this week. The event was held in Istanbul with the participation L'Oreal Turkey General Manager Gökçen, UNESCO's Turkey National Commission president, professor Öcal Oğuz, and Turkish writer and actress Gülse Birsel.

Eda Aydoğan Güngör from the METU Department of Metallurgical and Materials Engineering and associate Dr. Saniye Söylemez from Ordu University, faculty of arts and sciences, department of chemistry were awarded for their projects in physical sciences. Güngör is working on a project that aims to reduce carbon emissions in energy, aviation and space systems, while Söylemez is planning to develop a mechanism for the early diagnosis of Alzheimer's, one of the biggest problems of our time.

“Developing such projects requires a lot of time, and sometimes for us as women it can be hard. However, programs like this give us great motivation,” Söylemez said.

Gülcihan Gülseren from Konya Food and Agriculture University, molecular biology and genetics department and Nihal Terzi Çizmecioğlu from the METU Department of Biological Sciences were awarded for projects in life and environmental sciences. Gülseren’s project aims to develop an effective treatment against human pathogenic viruses, including COVID-19. New potential pandemics are looming, she said, and developing an adaptive biomaterial against different respiratory pathogens is crucial. Çizmecioğlu’s project aims to better understand embryonic stem cell differentiation, which can lead to a better understanding of the formation of neurodevelopmental disorders and possible treatment pathways.

“It is critically important to encourage young scientists at an early stage. In this respect, the existence of an award for women of science is also very important in terms of gender equality,” Çizmecioğlu said. “You should always think about your goal and remember that you will have to work very hard to achieve it. But, you should know, dreams come true,” she added.

Each of the four Turkish scientists who were deemed worthy of an award in the program this year was supported with a prize of TL 120,000 (around $12,400) for their scientific research.

The winners were selected by the independent UNESCO jury, taking into account criteria such as their academic backgrounds, the contribution of their projects to science, their applicability, sustainability and scientific innovation, Gökçen said.