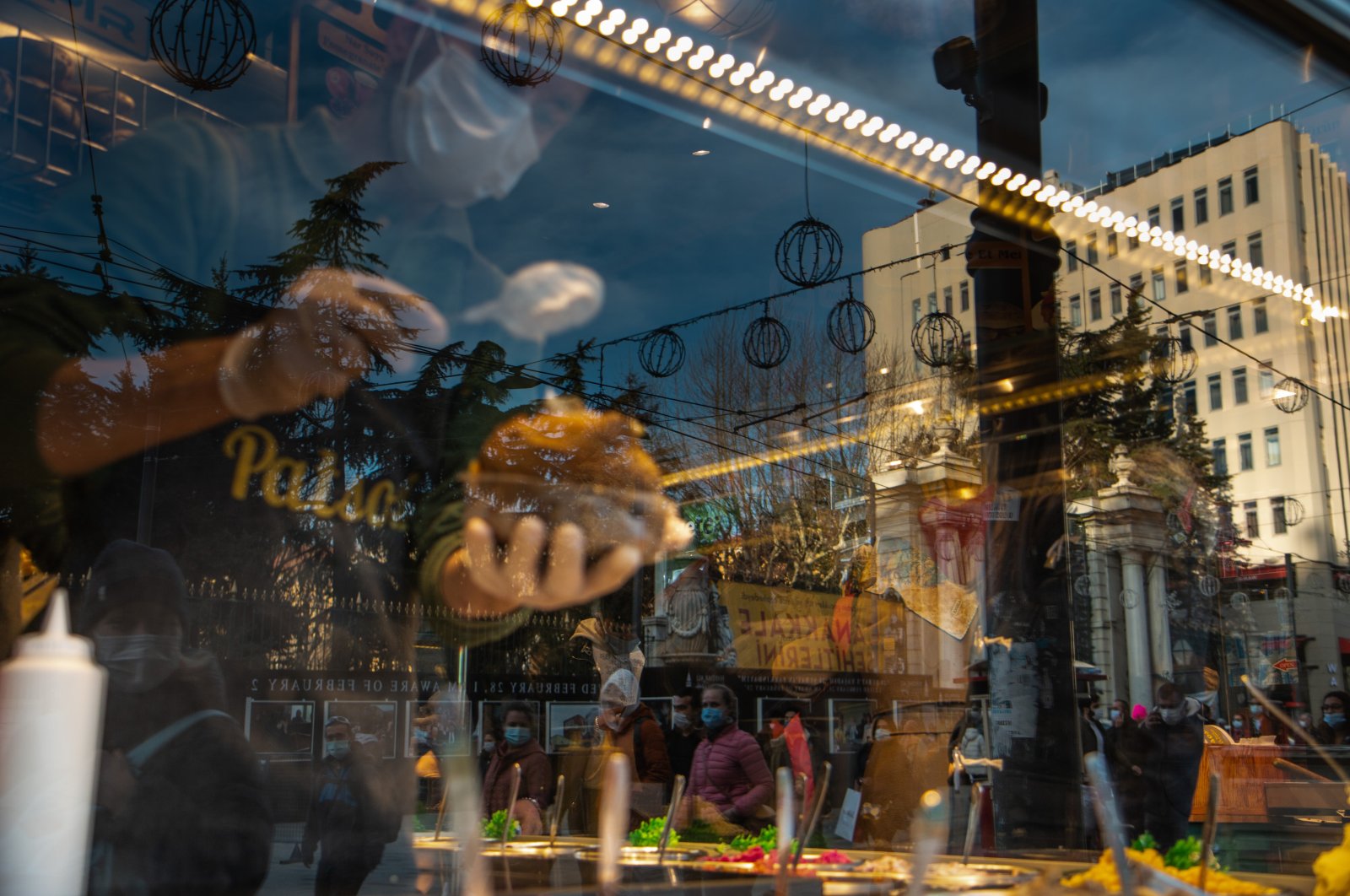 A corner kitchen called Sofra in Boston runs a menu with dozens of Turkish dishes. (Photo by Tunahan Turhan/SOPA Images/LightRocket via Getty Images)
by Matt Hanson May 18, 2021 10:26 am

Along the thoroughfares of Cambridge, Massachusetts, nestled in the urban environs of Boston, a corner kitchen called Sofra runs a menu that attests to the uniquely provident fusions between Turkish and American dining

On any given day in the week, it is not uncommon to see a spillover of people lining up, whiling away their time and conversing to abandon as they await their fare outside the cafe and restaurant Sofra. Although still closed to indoor dining due to pandemic restrictions, determined and hungry crowds gather for the delightful medley of tastes uniquely prepared by a kitchen that seems to have perfected one of the most successful fusions of Eastern and Western cuisine in Greater Boston, all from a modest storefront across from a busy intersection in Cambridge.

Sofra, from the Turkish for “feast", also has the connotation of a traditional setting in which a table is prepared and filled from end to end with every special delicacy local to the region in which it is harvested, made and served. In its literal definition, “sofra” is translated as “table” itself, which, according to popular Turkish thought would be unthinkable without a splendid variety of foods on it. By the diversity of their menu, as generous as it is integrated to local tastes, Sofra lives up to its name. Their drinks alone indicate a deep knowledge of the Turkish palate.

Seasonal sherbets, offered still or sparkling in mango or key lime, recall the sweet and fruity Ottoman palace refreshment that remains a staple, especially for Ramadan breakfast. Yet, the kinds mixed at Sofra further the exotic bent of the drink that was originally intended to impress the sultan with the latest culinary appropriations along its once-far-reaching frontiers. And after imagining the mango-infused iced victuals of Mughal India exported westward to the high palace in Constantinople, Sofra also purveys a health-conscious, anti-inflammatory Persian recipe known as “Golden Milk,” or by its ingredients, as a turmeric latte.

The inclusion of broad regional libations and dishes is classic for Turkish cooking, which has been enriched by its neighbors’ mixtures, encompassing Slavic, Greek, Arab, Iranian, Turkic, Kurdish, Georgian, Russian, and other domestic minorities and folk communities, not to mention the pervasive influence of the Western cultures that continue to have an overarching influence in the tastes and cooking prescribed as part of the constantly changing, yet stubbornly ancient Turkish kitchen. Perhaps to familiarize Americans who generally develop a Francophile bent in cafe culture, Sofra blends a fine “Turk Au Lait” – Turkish coffee with milk.

To make it new

As would be expected from a Turkish restaurant in America, there are culinary overlaps at Sofra that appear to brush quite close to having been made to appease those patrons who might have rather enjoyed dishes made on Greek or Levantine terms, a sensitive and often complicated blur of differences. But, Sofra has not given to the temptations of such generalization, as is often problematic with fusions of Asian cuisine that tend to cancel out the genuine soul of a rooted tradition of local cooking in favor of an Americanized smorgasbord out to satisfy everyone at once.

Instead, the culinary genius of Sofra has uplifted the essence of traditional authenticity to especially original heights, according with the refined tastes in both the Turkish and American kitchens. The powerful simplicity of an acknowledged favorite on the Sofra menu, deceptively plain by its title, “cheese börek,” is a revelation, adapting what to many in Turkey would be of fleeting interest as a widespread, convenient standard to every city street and home oven. In fact, the simplicity of the “börek” is its strong point, as the savory pastry of layered, thin dough mixed with cheeses and herbs can be altered practically infinitely.

Sofra’s “cheese börek” is crispy on the outside, effecting a golden-brown crust that, together with the soft, melted cheese throughout holds an irresistible, appetizing consistency. Dished out with a light cream and a bruschetta-like, dense and oniony tomato salad, it is a visionary version of the normal Turkish street food variety that is as common as daily bread. Another ordinary item prepped in droves throughout Istanbul is a stuffed baked potato called “kumpir," which, in the hands of Sofra, gets a gourmet makeover. The selection of ingredients bridge the recipe from its conventions to innovations of their possibilities on the plate.

It is a completely different culinary world in the Western hemisphere, where the potato originates, and so, a kumpir in Boston should have a distinct taste from its Old World relative. Emboldened by a stout helping of cauliflower, Sofra’s “kumpir” is packed with positive calories on account of its mashed interior absorbing a harmonious assemblage of barley and chickpeas rounded out with “Kasseri” cheese and “Aleppo honey” to sweeten its complex, and pleasurably edible textures. A gregarious Bostonian of a waiter at Sofra confessed that the “cheese börek” and “Sweet potato kumpir” were his go-to choices.

Between richness and conscience

The menu at Sofra balances the fine line that divides health from enjoyment when it comes to the excesses or moderations of salts and sweets. Most importantly, the experience of eating Sofra's delicious "cheese börek” borders on euphoria, as it leans in where it overwhelms in its generous amounts of cheese, with liberal investment in oils and butters to lather and fry its surfaces, heated down to the middle. At the same time, the quality of the flour, and the freshness of the cheese and cream is tastable. Ultimately, it has the double effect of apparent relish, while conscientiously instilling a thoughtful, healthy provision.

For a foodie accustomed to the massive dosage of sides heaped onto a “kumpir” baked potato on the shores of Ortaköy, for example, the “sweet potato kumpir” at Sofra may seem spartan and conservative in comparison, something out of the health nut playbook. Yet, the choice of an apparently misspelled Kayseri cheese, named after the famed dairy industry of southwestern Turkey, and endangered honey from the tragic city of Aleppo, builds what might be called a “Boston kumpir” into a nerve center of health-conscious, downtown eating.

As a global city on the rise, Boston is home to a vast spectrum of culinary diversity that in one place fertilizes a specific ecology of palatable intermixture. Whereas Boston is known to some Turkish speakers as “Bostancı”, a homonymic joke literally meaning gardener, for its sizable Turkish community, the talented cooks at Sofra serve not only a complex and nutritious menu, but with each order are very possibly reinforcing networks of engagement, familiarity and creativity between Turks and Americans. It could be said that Sofra has a more American leaning than Turkish; however, their inspiration to perfect imaginative recipes delves and soars beyond territorial or cultural categorization.