To read is to know: Revisiting used bookshops in Ortaköy 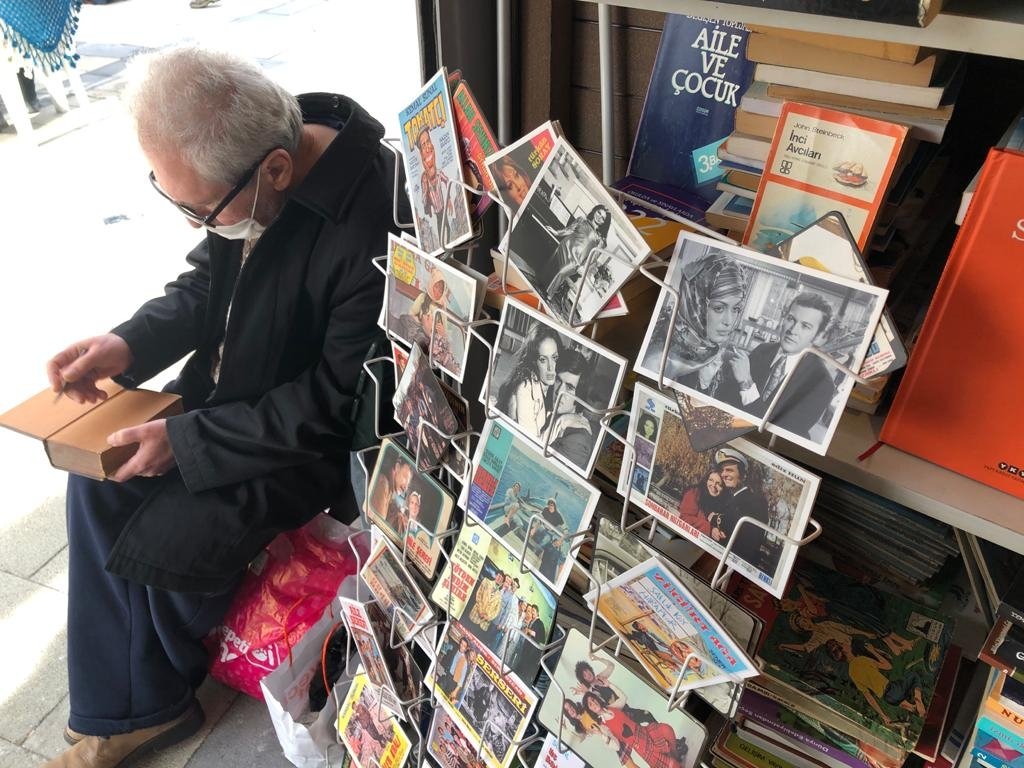 One of the best-known places for used books in Istanbul is by the pier in Ortaköy, where people breathe in the winds of the Bosporus, eating baked potatoes while browsing the yellowed pages of curious historicity

From the docks of Beşiktaş, it is a brisk walk to Ortaköy, traversing a straight, busy road of stone walls lined with portraits of Republic of Turkey founder Mustafa Kemal Atatürk, intermittently passing the exquisite architectural facades of Bosporus palaces and the rolling hills of pastoral inner-city gardens. At the storied waterfront neighborhood, once a village, and now shaded by the July 15 Democracy and Martyrs Bridge, the six-pointed star and high-security gate to the Tree of Life synagogue is a bold reminder of the historic social complexity that expresses Istanbul in storytelling, both written and spoken.

And it is on the pier of Ortaköy where a row of used booksellers, also known by the Turkish appellation of sahaf, where literary tales commingle with the immediate presence of architectural wonder, and the words that issue uninhibited, freely and with a wry sense of humor from the mouths of those who while away their hours observing, remembering and recounting visions of old. It is with likeminded pleasure, by the mark of endurance, that the books collected and sold at Ortaköy reflect the lingering echoes of times passed.

Some booksellers are absent, their shops closed by a heavy, corrugated metal barrier so as to protect the invaluable stocks of paginated wisdom within. Yet, at the end of the line where the slim closet rooms of books are stacked and shelved underneath signs indicating their purveyor, a man named Volga is wary of the close quarters as he welcomes bibliophiles into his densely packed commercial space. He stops eating his plain börek and kindly offers to host inquiries, and impromptu research into his splayed catalog.

As an American art writer in Istanbul, what caught my eye, firstly, was a picture book by the renowned 19th-century seascape painter Winslow Homer. The self-taught artist and I share the same birthplace, namely Massachusetts, although he is from the capital, and I am from the rural western forests. But I was raised on the oceanfront and spent my formative years looking out onto the liquid horizons that Homer would eternalize and emblazon into the art history of American realism. The cloudy froth of Atlantic waves on the cover made me nostalgic.

And zooming over to local interest, I gravitated to the magnum opus of Turkish novelist Mario Levi, titled, “Istanbul Was A Fairy Tale.” The 800-page doorstopper is a stout chronicle of life in a Jewish family, across a sweep of generations from the 1920s to the 1980s. I have always wanted to find its rare English translation, so when I see the Turkish original, the lure of finding it in my native language one day is strengthened. Volga watched, wordlessly, as I was fixated on the spines of his neatly arrayed hoard of literature.

To be a boy and sell books

A young preadolescent fellow named Ali was maintaining two shops beside Volga with a shrewd sensibility. Ali was ostensibly the son, or close relation to Volga, as whenever I asked about the price of a book, he would run and ask just what to do. It made the prospect of buying all the more tantalizing, so as to entertain the boy and give him the self-esteem that might come with making a sale. It was the day before the first night of Hanukkah, and I was in Ortaköy, wherein 2015, modern Turkey’s inaugural public Hanukkah ceremony was celebrated.

I happened on a book wrapped in clean, clear plastic, a method to preserve vintage classics in the sahaf world of unexpected, priceless finds. The Turkish translation of an obscure, slim volume by French philosopher Jean-Paul Sartre dangled from a string, showing its title, “The Jewish Question.” The famed author wrote the book-length essay in 1944 after the Liberation of Paris from German occupation in World War II. The piece analyzes anti-Semitism, enlightening with respect to Ortaköy's significance in regional Jewish history.

Although the price of the Sartre book was penciled in, at TL 35, however illegibly, under the cover, Ali ran to Volga’s shop next door and confirmed the price. Then, the poems of James Joyce appeared before me. In my studies and readings, I did not appreciate these precious gems of English literature and so was apt to spend the last bills in my wallet on the pocket-sized book. Ali bargained the price down TL 10. When I was still TL 5 short, he responded, “It’s not my problem.”

The neighboring sahaf, next to the second outlet Ali was busily managing from a height of about 150 centimeters, was run by a familiar face. The shopkeeper, Tahsin T. Kılıçarslan, was quick to recall that we may have met before. He produced his business card, which bore the image of a house formed by a stack of open books, with its roof a slightly opened tome, out of which a chimney emits letters. Tahsin was all smiles, opening his arms to my bookish fascination as he confidently showed me the Instagram page of his sahaf, named, Çatı, meaning “roof” in Turkish.

It was then that I came upon, “Panther in the Basement,” a short novel by Israeli writer Amos Oz, who was lionized for his prolific contribution to Hebrew letters. It was an irresistible, compulsive buy on my part, though one that I felt necessary to make within the holiday spirit, inspired by the spiritual ambiance of Ortaköy, a fusion of cultures and faiths, that, like a book, is an invitation to bygone worlds that age beautifully, if not with a bittersweetness. Tahsin was as generous as he was kind, offering a discount without hesitation, as a pleasant gesture.

In the midst of winter, as a global pandemic reaches a fever pitch in the masked face of vaccine anticipation, political controversy and personal metamorphosis, the Ortaköy sahaf lends a peculiarly comforting experience. It provides a link to the Istanbul of the past before the new normal set unprecedented paradigm shifts into motion while allowing for cultural activity to continue and communicate the legacies of thought, writing, art and music that have preceded.

At the end of the row of sahafs in Ortaköy, there was a man who appeared entirely eccentric by his mannerisms, greeting with a rather introspective attitude. And as a group of women told jokes in the open-air market, he was underlining sentences in an antique hardcover. He sat and studied in broad daylight, as the clouds parted and the sunshine carried waves of optimism over the Bosporus, uncommon in the often overcast winter between two seas and two continents, where, despite the problems of the world, a man might find peace over an open book.