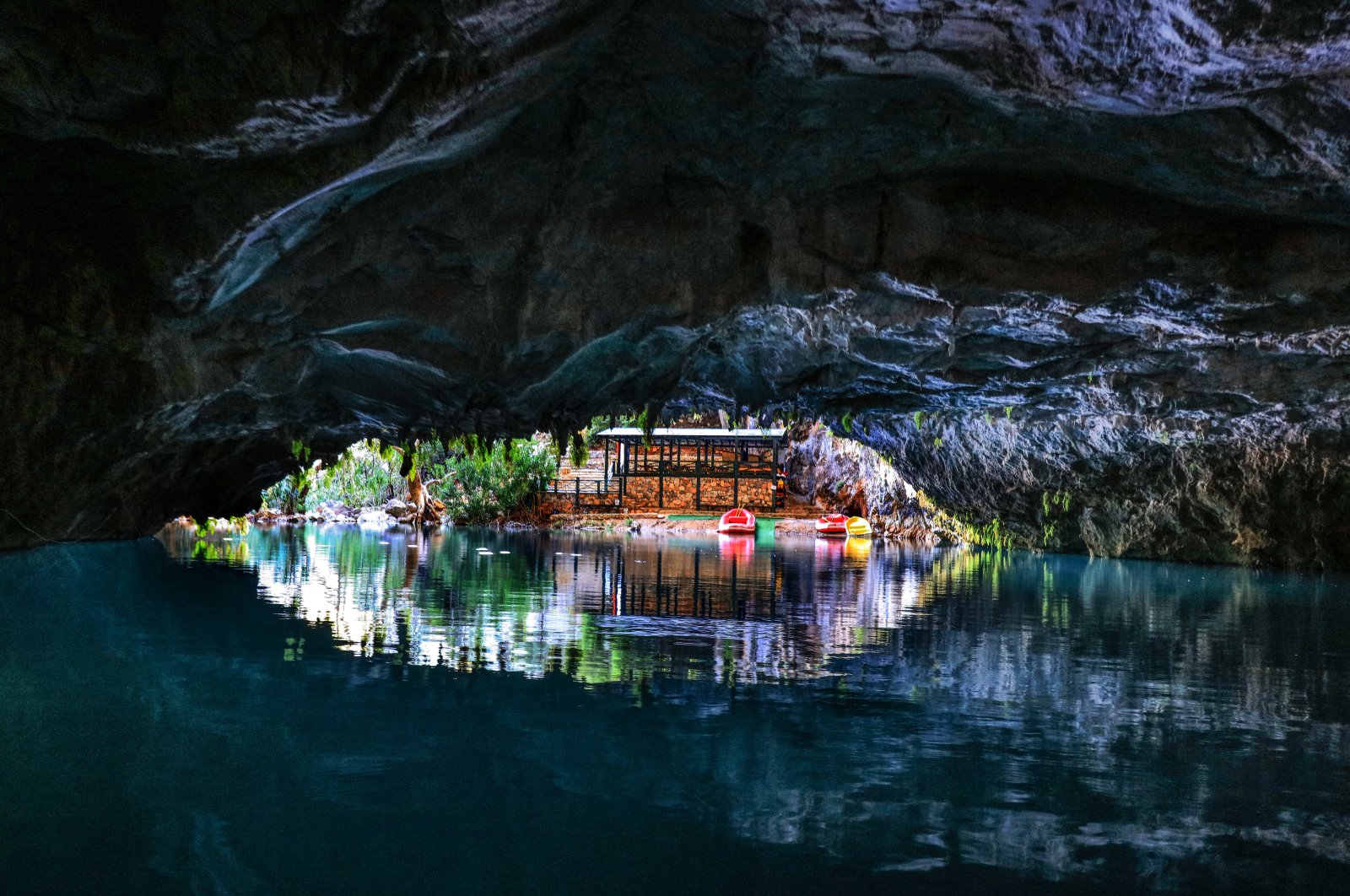 The entrance to Altınbeşik Cave and its lake with its clear, pristine waters and a wooden hut in the background, Antalya, southern Turkey. (AA Photo)
by Daily Sabah with IHA Apr 09, 2021 11:37 am
RECOMMENDED

Many wonders lie beneath Earth's surface, and anyone who has seen the episode of "Planet Earth" on caves can confirm that fact. Turkey is home to unique, jaw-dropping underground natural treasures with southern Antalya province's Altınbeşik Cave being one of the most important sites.

Altınbeşik Cave, located in the Ibradı district of Antalya, is part of Altınbeşik National Park, located a few kilometers from the village of Ürünlü on the outskirts of Taurus Mountains. To reach the cave and the park, one needs to take the scenic route. The road leading to the park is an experience in itself, offering an exciting route that is likely to particularly challenge those wary of heights.

The cave and the national park have been on lockdown for more than a year, unfortunately, due to the COVID-19 pandemic. So, at the moment, silence presides over the echoey cave, and the water stands peacefully undisturbed. Before the pandemic, the cave used to host thousands of people year-round. In 2019, it attracted 69,000 visitors.

The cave, standing 450 meters (1,475 feet) above sea level, was discovered in 1966 by Temuçin Aygen, who was the founder and honorary chairperson of the Turkish Speleology Foundation. Speleology is the scientific study of caves, their structure, properties, history and how they change over time.

It was declared a national park in 1994 and has over time, particularly in the last five years, become a beacon of tourism in Antalya, attracting local and foreign tourists. Murat Yamansoy, the mukhtar of Ürünlü village, said he hopes the park will be able to reopen for visitors soon.

“Altınbeşik Cave has been closed to visitors for nearly a year and a half because of the pandemic. When it was open, it used to attract 80,000 to 100,000 local and foreign visitors annually,” Yamansoy told Ihlas News Agency (IHA).

The cave is home to Turkey's largest, and longest, underground lake. A special phenomenon of nature, subterranean lakes are truly an amazing sight to behold and Altınbeşik is the third longest in the world, stretching over 2,500 meters in the cave.

The must-see dripping stalactite formations in the cave hang from the ceiling as if Earth's spears are trying to reach Hades, the ancient Greek god of the underworld. Meanwhile, the underworld fights back with its numerous stalagmite formations that are, of course, formed from the droplets of their enemy's spears. Excuse the extended metaphor, but the whole scene reminds one of a mesmerizing battlefield.

The ice-like travertines, formed from limestone deposits, give the atmosphere a colder touch while preserving its spellbinding qualities. The enchantingly pristine water of the lake, meanwhile, adds to the otherworldly effect of the whole scene. One cannot help but be fascinated and enthralled by the sight, though at some point claustrophobia does start to creep in.

If one is familiar with Clive Cussler's “Inca Gold,” the underground lake takes one to the book's climactic thrilling chapter where the hero Dirk Pitt has to navigate through an ancient, unexplored underground river.

The cave and lake feel like they were made in ancient times from the wild imagination of the likes of Cussler, a mix of a subterranean world of darkness, antiquity older than even words and the indescribable beauty of nature.