Ankara's ancient network of caverns and caves built by Hittites, Byzantines and more 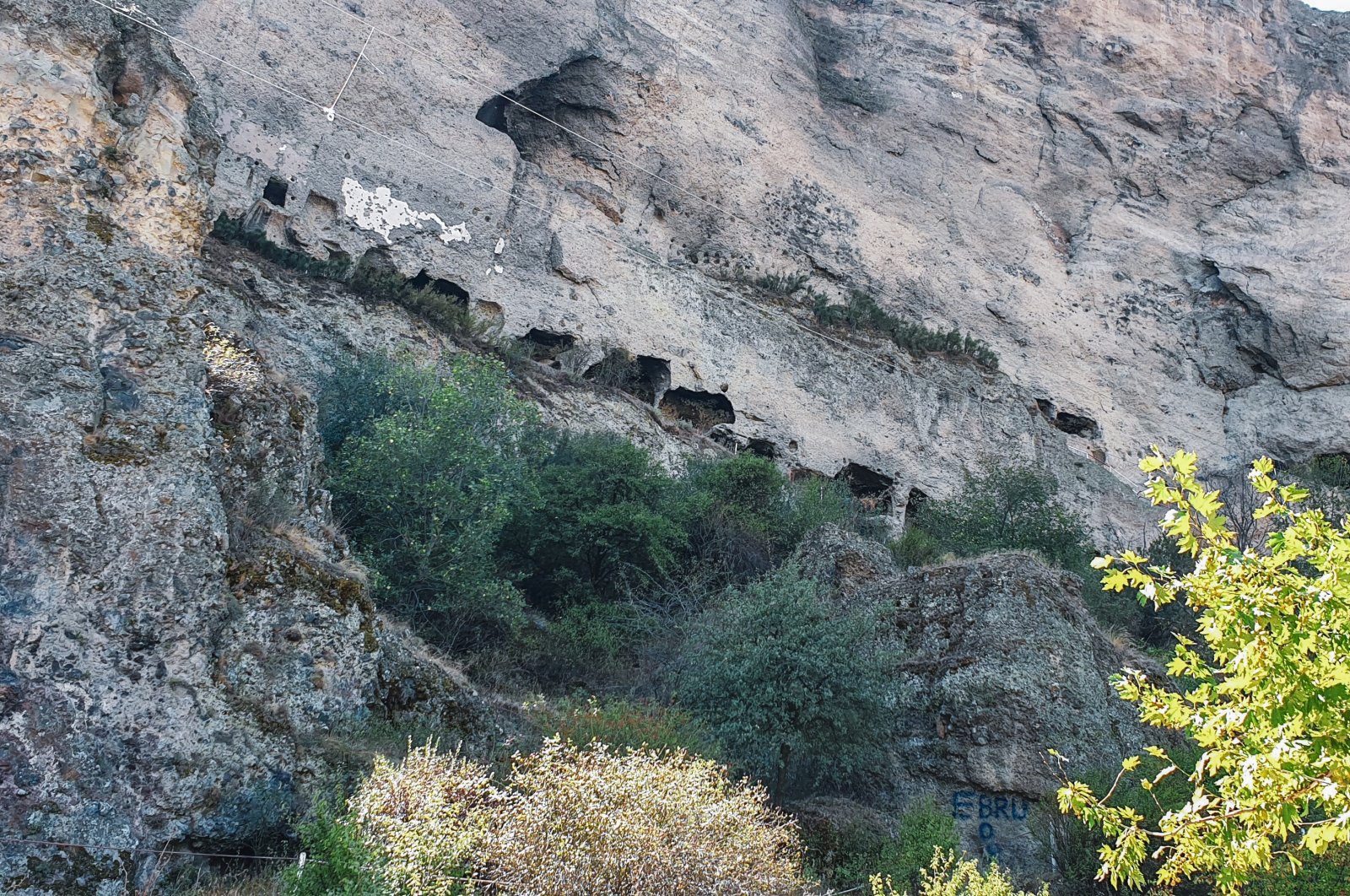 Unfairly thought of as boring and dull with limited attractions, Ankara is often cast in a negative light, especially when compared to Istanbul and other tourism hot spots. This week, we’ll be exploring a vast ancient cave network in suburban Güdül

Güdül is one of Ankara’s least densely populated districts with as few as 9,000 residents. Sandwiched between the large rural districts of Beypazarı and Kızılcahamam, Güdül is among the many underappreciated spots in Ankara that deserve greater recognition. Besides downtown Ankara, Beypazarı and Kızılcahamam make up a fair share of Ankara’s tourism industry; however, unfortunately, most other areas of our beautiful capital have remained in obscurity and to a certain extent, neglected over the years.

Despite its small geographic area, Güdül boasts many attractions and has the potential to become a popular travel destination, yet it remains relatively unknown due to a lack of publicity.

When it comes to Ankara’s historical and natural attractions, two things don’t change: the awe I feel witnessing the beauty of these hidden sites and the subsequent disappointment I feel on account of the lack of general interest in them.

In this week’s article, I would like to acquaint you with the Inönü Caves, an ancient cave network built inside Güdül’s Kirmir Valley, divided by the Kirmir River. Without further ado, let’s begin.

Exciting and mysterious – these two words perfectly describe this cave network and reflect the emotions that Inönü Caves evoked in me. Due to the coronavirus pandemic, the caves were completely empty of visitors, and just like many other places I have visited during this period, Inönü Caves seemed to have been especially reserved for me.

Among historical structures and constructions, manmade caves are my favorite. Not only do they easily withstand the centuries with minimal damage by natural elements, but they also feel like archaic passages taking visitors centuries or millenniums back in time. It is clear looking at Inönü Caves that these manmade structures have kept their authenticity through the ages.

The history of Inönü Caves dates back to as early as 2000 B.C., to the Hittite era in Anatolia. In consecutive centuries, Phrygians ruled the modern-day Güdül area, yet not much has been discovered from that period. The primary cave network, which is the part of Inönü Caves that attracts the most visitors, is believed to have been built by the Romans who settled here during the period when Christianity was gaining popularity and Christians were being persecuted. Later on, the Byzantines inhabited the area.

This multilevel cave network consists of dozens of rooms and churches. Thanks to the early protective and renovative work done by the municipality to enhance tourism in the area, the rooms are connected to each other by iron staircases that have banisters to allow visitors to tread carefully and avoid any falls. However, I still recommend you walk around cautiously due to how steep the cave entrances can be.

It was a great experience to walk inside the rooms where the ancient Romans, Byzantines and Hittites once lived and touch the preserved cross symbols that were once meticulously carved by ancient stonemasons.

When I reached the top floor of the cave complex, I sat down on a rock and gazed over the Kirmir River and Kirmir Valley and contemplated what this place might have looked like centuries ago.

Most visitors spend about 45 minutes in the caves, but if you’re like me, you’ll want to take your time. It took me more than 90 minutes to cover the whole attraction as I didn’t want to miss a thing.

Sometimes, the path takes you through narrow tunnels where you are required to squat or even crouch in order to proceed. A word of advice – watch your head if you want to avoid painful bumps as I experienced.

HOW TO REACH THE CAVES

Getting to Inönü Caves is easier than it seems.

You can get to Güdül by public and private buses; however, from Güdül to the caves, you will be required to take a taxi. Going from the bus terminal to the caves should be no more than a 10-minute drive. I strongly recommend that you ask the taxi driver to wait and return to Güdül with the same driver due to the scarcity of cabs in the area.

Public buses leave from the Etlik Bus Terminal to Güdül on a daily basis. The one-way trip takes approximately 90 minutes. One-way tickets are priced at TL 15.75 ($2) for adults and TL 10.50 for students. However, due to the COVID-19 pandemic, the departure times and ticket prices may have unannounced changes, so the safest option is to call the Ankara-Güdül Bus Bureau near the time of your trip. You can reach them at +90 (312) 728-1515.

If for whatever reason, you are hesitant to grab a taxi, there is another option, although a slightly more challenging one. You can always walk from Güdül to Inönü Caves, which takes approximately 35 minutes at a normal pace. It’s your call, of course.

With your own vehicle

Güdül is located 92 kilometers (57 miles) northwest of Ankara. There are two main roads to choose from when going to Güdül. I would suggest you take the toll-free highway (passing by the district of Ayaş) that stretches westward of Ankara instead of driving through the toll road that heads toward the north. The roadway from Ankara to central Güdül is well-built making it an easy drive.

Once you reach Güdül, you’ll encounter plenty of signs directing you to Inönü Caves which should take you no longer than 10 minutes to reach. You can easily park your vehicle on either side of the road.

WHAT ELSE TO SEE BEFORE LEAVING GÜDÜL

Once done with the caves, stay in the area as Güdül offers two other intriguing spots nearby.

This small yet interesting museum boasts a considerably large collection of archaeological artifacts unearthed in the area, as well as historically traditional clothes and information boards about the history, socioeconomic life and nature of Güdül.

I found this museum to be insightful and the exhibition to be succinct. I visited this museum prior to Inönü Caves and within 20 minutes felt I had a good grasp of Güdül’s history and would suggest you do the same.

There are no regulated visiting hours for the museum. To visit the museum you have to go to the municipality building a couple of meters away and request to see the museum. As I was told, due to the low number of visitors coming to Güdül, they decided to open the museum only whenever someone wants to see it instead of keeping it open every day. Admission is free of charge.

Sorgun Lake is situated in the northern district of Güdül. In this area, the transition from the dry Central Anatolian hills to the densely forested Black Sea mountains and cool climate is discernable. The forests surrounding Sorgun Lake accommodate hundreds of different plants and are home to many species of wildlife such as wolves, foxes, coyotes, boars, badgers, weasels, hares and even bears.

Prior to your arrival, you can grab some snacks from a market on the way or make something at home to snack on at the picturesque picnic areas overlooking Sorgun Lake. If you want to explore the area properly, there is a trekking path that goes around the lake.

The visiting fees for Sorgun Lake are TL 10 for adults and TL 5 for students. Parking costs TL 30 for cars, TL 20 for motorcycles and TL 10 for bicycles. Sorgun Lake also offers camping with a daily fee of TL 40 per tent.