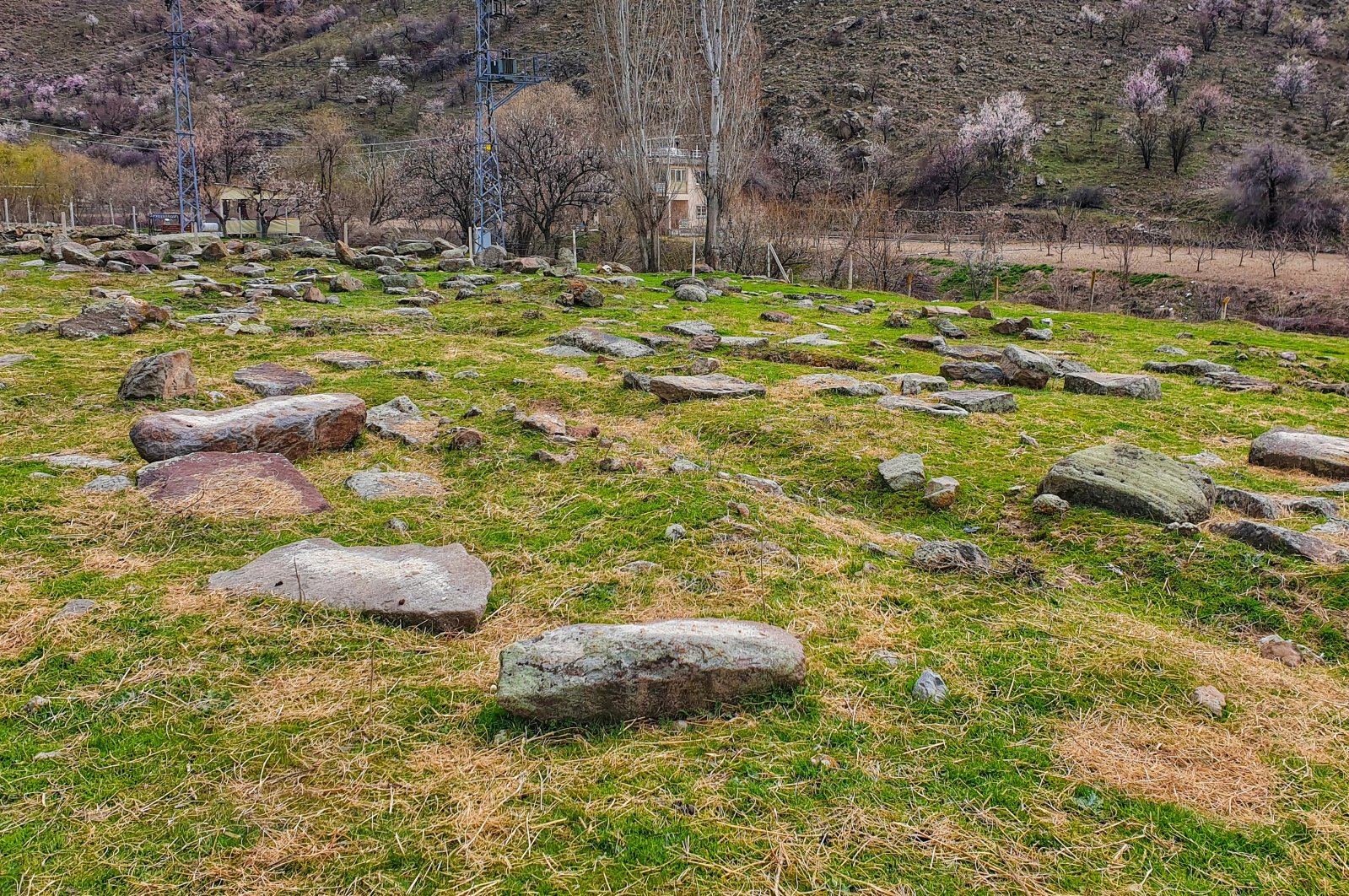 Unfairly thought of as boring and dull, Turkey's capital is often cast in a negative light, especially when compared with Istanbul and other tourism hot spots. This week, we’ll be exploring the mysterious village of Stanoz with its intriguing historical landmarks

As we witness a possible second wave of coronavirus cases and it becomes obvious that the restrictions enforced to mitigate the pandemic's impact will not be lifted anytime soon, I have been spending a considerable amount of my time every day trying to discover far-flung attractions in Ankara.

The newest addition to my list of Ankara’s lesser-known attractions is the Zir Valley, located in the district of Sincan in Ankara province, some 27 km (16.7 miles) from the city center of Ankara. Prior to my visit, I did substantial research on the area and its history, and I was baffled that such an impressive site was so close. Unfortunately, it is also in danger of being lost due to neglect.

The valley of Zir was once a wealthy area and was the location of the prosperous Ottoman village of Stanoz (also known as Istanos), which was one of the most important contributors to Ankara’s economy for centuries. With the exception of an old stone bridge, some humanmade caves and an old Armenian cemetery, however, nothing remains of the village. Since World War I, illegal treasure hunting, dilapidation caused by time and frequent floods in the valley have decimated much of what was left of Stanoz. This old settlement remains a hidden, yet priceless, relic of Ankara’s past.

So, let me introduce you further to this valley of secrets.

We chiefly owe what we know about Stanoz to the journals of early travelers who visited this settlement over the past few centuries. The settlement was known for being a prosperous village in the Ankara Sanjak (an Ottoman administrative division) of the empire. It is not certain when the village was founded, but it has been suggested that the earliest residents of Stanoz came from Cilicia (an ancient region that includes the modern-day southern Turkish provinces of Hatay, Mersin and Osmaniye) in the 15th century.

Stanoz was an economic hub in Ankara. According to old Ottoman records, one year in the early 1900s, more than 30% of the total taxes collected from villages in Ankara were acquired from Stanoz.

In 1618, a Polish-Armenian traveler by the name of Simeon mentions Stanoz in his journals as one of the top manufacturers of the “sof” fabric, also known as mohair or "Tiftik" in Turkish, which was processed from the wool of indigenous Angora goats in Ankara.

The most insightful information, however, was provided by Evliya Çelebi, undoubtedly the most renowned Turkish traveler in history, in the second book of the second volume of his journals. Stanoz is, in his words from when he visited the village in the 1640s: “...situated near a stream, it is a well-maintained village with 1,000 households. The settlement includes a bathhouse, bazaar and a mosque. Both sides of the village are surrounded by high cliffs and rocks reaching the sky like the Milky Way. They are so high and glorious that one can’t dare to look at them for too long. These rocks are of unusual shapes resembling dragons, lions and elephants, and are perilous. The residents of this town are mostly Armenians. The town has a pleasant climate due to being located right near the stream.”

William Francis Ainsworth, a British traveler who spent a day in Stanoz in 1839, claimed that the settlement comprises of 400 households. The way Ainsworth describes the area is unique: “Many orchards stretch along the left bank of the stream. At the very same place, there is a church serving the hardworking Christians whose main labor is herding goats and sheep.”

What happened to Stanoz is no secret. During World War I, the Armenian population of the village was forced to leave their homes and immigrated to different countries, primarily France. The area has remained a ghost village ever since, vulnerable to threats.

Unfortunately, due to the remote location of the valley, there is no public transportation to the area and the only way to get there is with a personal vehicle. You have to take a 30-minute drive from central Ankara to reach Zir. The road is asphalted the whole way and comfortable to drive on. If you are planning on using an online map, I would suggest you put in the following coordinates as your destination: 39.975375, 32.509579. These take you straight to the caves and the old Armenian cemetery. The road heading to the village once you have taken a turn from the main road is surrounded by stone quarries. As such, I advise you to drive carefully because rubble may have fallen from trucks that transport stone to and from the quarries. Once you reach the caves, feel free to park anywhere on the sides of the road.

WHAT TO SEE IN THE VALLEY

There are three main places to visit in the valley of Zir that you should add to your itinerary. It is not possible to locate these spots on Google Maps or any other location providers, so to make sure you will have no issues finding them, I will be writing down the coordinates of each.

Also called the Zagar Bridge by some sources, this stone bridge is located right at the beginning of the valley. Presumed to be built in the Ottoman era, this structure is built with huge cut stone blocks and stands as a fine example of historic Ottoman stonemasonry. The degree of preservation of the bridge is quite impressive. The coordinates of the bridge are as follows: 39.990983, 32.525752

Situated just before the Armenian cemetery is a complex cave network carved inside huge boulders embedded into the hill. I tried to explore the rooms a little, however, the ground is very slippery and the path that joins the caves to each other is very narrow and dangerous. Considering that the caves are atop a 40-meter (131 feet) cliff, it is not wise to try to climb all the way up.

As we understand from his writings, Evliya Çelebi seemed to have gotten the chance to explore this complex cave system: “There are such caves around that even a thousand horses tied together would fit inside them.”

In some scientific sources, it is stated this was a cave settlement built by the Byzantines and included long corridors, various rooms and even a rock-cut chapel as part of its infrastructure. The coordinates of the caves are as follows: 39.975375, 32.509579

The old Armenian cemetery is undoubtedly the most notable site in the valley and the strongest remnant of its past. Adjacent to the road cutting through the valley, this cemetery is full of old tombstones with Armenian inscriptions on them.

Frankly, as I was exploring the cemetery, the astonishment I had in the beginning was soon replaced by disappointment and sadness. The site is very impressive and beautiful but also neglected and vandalized. This unique cemetery struggles with perhaps what is the most common issue historical sites face in Turkey: treasure hunters. After chatting to local farmers, I found out that treasure hunters occasionally come at night and dig the graves in hopes of finding gold. As such, I witnessed some saddening and appalling scenes of human bones, hollow and decayed from the years, and broken tombstones during my visit.

It was, however, a strangely special feeling to walk on the same grounds prominent travelers of the past laid foot on and wrote about.

The tombstones in the cemetery blew my mind, with many of them having legible inscriptions and artwork on them. The coordinates of the old Armenian cemetery are as follows: 39.973262, 32.507661

Sometimes, we get stuck in the city too much and let the bustling metropolitan life drag us into its chaos. However, many gems and stunning attractions stand unnoticed under our very noses. As I explore Ankara further, I certainly understand this better.

Times are hard and rather depressive these days for humanity. Boredom is boiling inside many, and some of us are consumed by the wanderlust growing steadily inside our bones. But we can still turn this hectic year of 2020 into an opportunity to travel responsibly and focus more on off-the-beaten-track places our unique country has to offer. Eventually, things will return to "normal", but in the meantime, try to get away from the city and appreciate the hidden beauties around you.