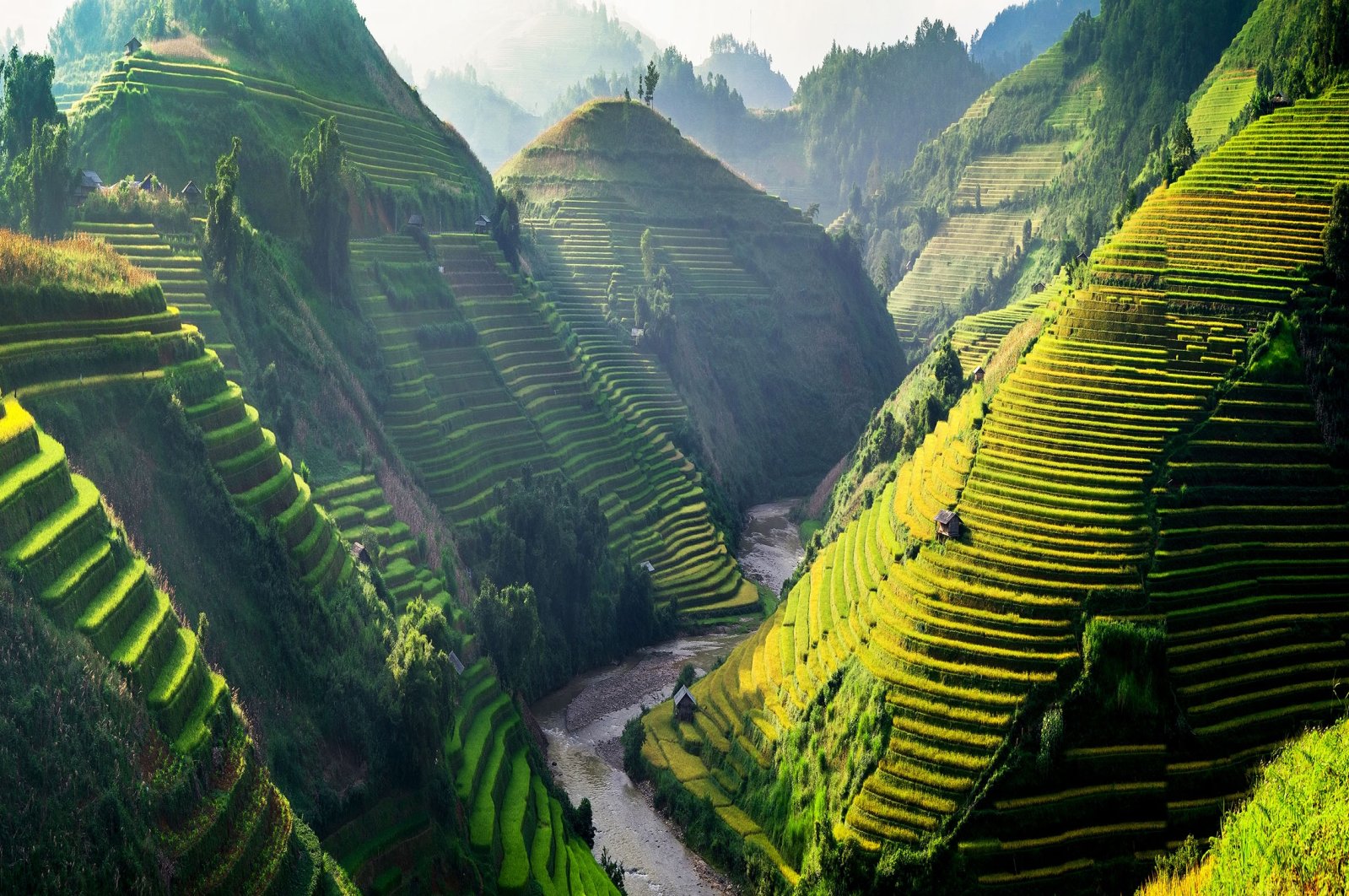 From chaotic metropolises to majestic natural landscapes that offer truly picturesque road trips, Vietnam is a country where one can never be bored as a tourist. It offers something to quite possibly everyone, be it peace and quiet, or loud and flashy neon lights.

So, what is there to see in this relatively small, or rather interestingly shaped, yet incredible Asian country with almost endless sightseeing opportunities. Well, one thing is certain: variety. However, for the sake of being concise let's pick 11 spots.

Sa Pa: A peaceful oasis in the north

The tropical heat that many associate with South-East Asia is nowhere to be found in northern Vietnam, 1,600 meters (5,249 feet) above sea level at the French-founded resort area of Sa Pa in the Hoang Lien Son Mountains.

Sa Pa is found at the base of Fansipan, Vietnam's highest mountain, and the former village now has an extensive tourist infrastructure.

With flashing neon signs, competing tour operators, hotels and restaurants try to lure in guests. While such flashiness may not appeal to everyone, it can't be denied that Sa Pa is one of Vietnam's most popular destinations.

This is also helped by the surrounding area, where visitors can spend days hiking along narrow paths that lead to lush green rice terraces and fields of corn and indigo.

Not far from Sa Pa is the small town of Bac Ha. Every Sunday, one of the largest markets in northern Vietnam takes place here.

At dawn, women in colorful dresses drag their goods to the marketplace, motorcycles with crates of flowers zoom by, horses carry heavy wares down from the surrounding mountains.

The scent of ginger and chili hangs in the air, a variety of roots, leaves and fruits are for sale.

In the very north of Vietnam, along its mountainous border with China, is the provincial capital, Ha Giang.

Doing the full loop of Vietnam's most popular motorcycle route takes at least three days, five if you want to explore the additional turns between villages along the way.

One thing to note, however, is that the roads are in poor condition, so the driving experience is essential.

Hanoi: Between chaos and contemplation

Vietnam's capital is also its transportation hub: No matter what day it is, there are guaranteed to be mopeds clogging the city's boulevards.

However, at the center of Hanoi, the narrow market alleys and old merchants' houses are clear of traffic as well as charming.

All across the 1,000-year-old city, chaos and tranquillity, modern lifestyles and ancestral traditions exist side-by-side.

Temples and historic buildings are as much a part of Hanoi as fancy hotels, glass office towers and numerous museums dedicated to Vietnam's history.

Cat Ba: Paddling to the karsts

Halong Bay, with its turquoise waters, is one of Vietnam's most iconic spots. Just a little south of the bay is Cat Ba Island.

Easily accessible from Hanoi, the island is a protected nature park that is home to several rare animal species, as well as offers excellent trekking opportunities to climbers from all over the world.

However, no trip would be complete without heading out to sea, preferably by kayak, to marvel at the karsts – and maybe even see a dolphin.

Just a fraction of these widely branching paths are open to the public, but anyone who enters this subterranean world, whether by foot or on boat, will experience surreal-looking, fantastically illuminated caves that are full of bizarre shapes.

The former imperial city of Hue is nestled on the banks of the Perfume River. In the 19th century, it was the political, religious and cultural center of Vietnam – something its temples, pagodas and nearby imperial tombs, each with its own character, can attest to.

In the middle of Hue is a sprawling citadel where the Purple Forbidden City can be found – the place reserved only for the emperor and his concubines.

It was here where the last emperor handed over power to Ho Chi Minh and the Democratic Republic of Vietnam in 1945.

Hoi An was once one of the most important ports in South-East Asia, where trade in porcelain, silk and spices flourished.

The elongated tunnel houses that characterize the older parts of the city are still around, as Hoi An was spared from the destruction of the Vietnam War.

The city's traditional houses have been owned by families for generations and have hardly changed since they were built some two centuries ago.

Acting as a sort of open-air museum, they provide a glimpse into the city's glorious past as well as the Chinese, Vietnamese and Japanese influences on the region's cultural history.

Da Lat: Popular with the Vietnamese

This former French resort town in the mountains of southern Vietnam is popular with many Vietnamese, who flock here on the weekends.

There are plenty of opportunities for hiking, climbing or whitewater rafting for the adventurous types, while narrow alleys, colonial villas and lots of flowers await those who explore the tranquil town.

This dynamic metropolis features everything from smoky temples and colonial buildings to glittering skyscrapers and temples of consumption.

In the very south of Vietnam, the Mekong River flows into the South China Sea in an extensive network of hundreds of river branches and canals. Where the Vietnam War once raged is now a fertile region.

The best way to explore the Mekong Delta is by moped or bicycle.

Many places in the area haven't really been developed for tourism, so there are plenty of opportunities to get to see nature in action.

One special feature of the delta is the floating market of Cai Rang, which can easily be reached from the largest city in the region, Can Tho.

Before sunrise, traders in boats large and small head out onto the river, and everything grown in the region is up for sale here.