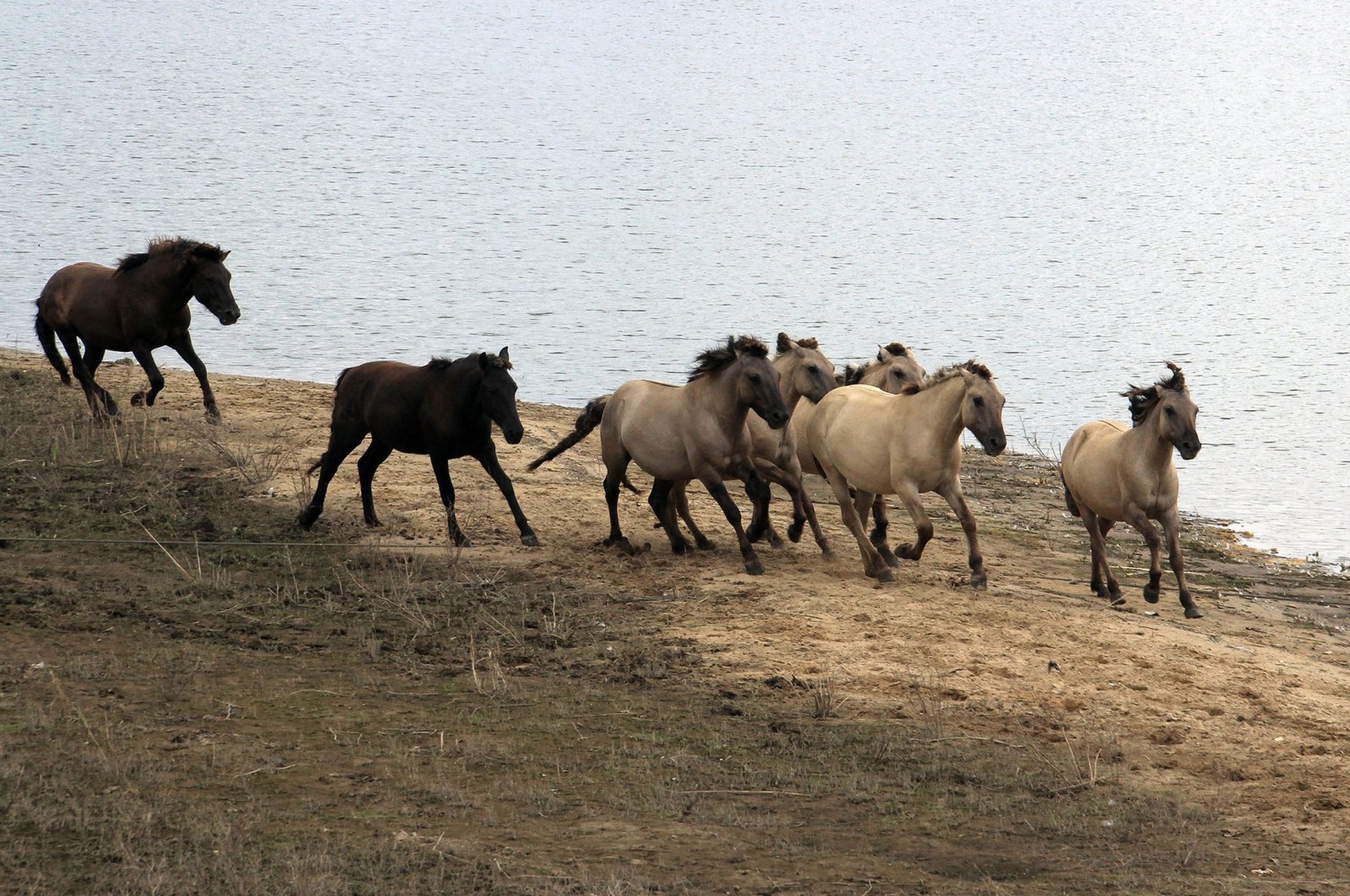 Two hours from Amsterdam and Rotterdam there's a rustic area of the Netherlands along the German border where wild horses and cycle paths along a unique landscape of rivers await travellers. (dpa Photo)
by Deutsche Presse-Agentur - dpa Jul 04, 2022 11:07 am
RECOMMENDED

Two hours from Amsterdam and Rotterdam there's a rustic area of the Netherlands called the Millingerwaard along the German border where wild horses and cycle paths along a unique landscape of rivers await travelers, where walking in high heels is not a good idea.

"How far is it to the Theetuin?" the woman wants to know.

Answer: The sandy path is a good 2 kilometers (1.24 miles) long. The route runs from the small village of Kekerdom to the exotic tea garden on the Waal, as the largest estuary of the Rhine in the Netherlands is called.

We are out and about in the Dutch-German border region, just beyond Kleve in North Rhine-Westphalia, Germany.

There are no roads that lead to the garden paradise of the Millinger Theetuin, the visitors come by foot or by bike. The woman in high heels solves the problem pragmatically: She takes off her high heels and walks the rest of the way barefoot.

"The Millingerwaard is a diamond in the Gelderse Poort," says forester Daan Meeuwissen. Gelderse Poort is the name given to the landscape of rivers between Kleve and Emmerich as well as Nijmegen and Arnhem on both sides of the Rhine and Waal, he explains.

Up until 35 years ago, farmers drove dairy cows here onto lush green meadows and corn fields spread out across fertile soil. Kleyboden had a brick factory on the banks of the Waal excavated as raw material for bricks. The hollows soon filled with water and were the basis for the natural paradise that today stretches around 7 square kilometers (2.7 square miles).

In the 1990s, the gradual transformation of the river, once used for agriculture and industry, into a landscape conservation area began: dredgers expanded the water pits into a lake landscape by gravelling them out.

River is the boss

"In the Waard you can experience the different types of landscape," says Meeuwissen. They range from pastureland at the towering Kekerdom protective dike to mysterious swamps, riparian forests with gnarled willows and black poplars, and sandy banks.

"The river is the boss here," they say, shaping the Millingerwaard nature reserve. It does so constantly, day after day, with its changing water level. Spring floods, for example, spread through the floodplains, while poplar and willow trees get their feet wet. "After each flood, the Millingerwaard is like new," says Meeuwissen.

Great egrets and grey herons lie in wait for prey in the marshy ground, as do spoonbills and storks. In addition, more than 150,000 white-fronted, grey and bean geese arrive from the Arctic every year to spend the winter.

Fauna and flora are left almost, but not completely, to their own devices: Around 150 semi-wild Konik horses and Scottish Galloway cattle roam freely through the Millingerwaard and the neighbouring Erlecomse Waard near Ooij.

The animals ensure that the flora – for example meadow sage, wild thistles and orchids – can develop and that the land does not become completely overgrown. According to "Boswachter" Meeuwissen, beavers and otters have also settled in the nature reserve.

Up to half a million hikers and cyclists visit the area every year, estimates the Dutch nature conservation organization Ark. Despite the considerable numbers, there are no problems assures Meeuwissen. The Konik horses and the Galloways are able to retreat into the impenetrable shrubbery. Only now and then do they block the paths. If they come across them, hikers and cyclists should keep calm and wait until the animals have moved on.

Contrast with the wilderness

The end destination of the hike is the Millinger Theetuin. A tea and coffee garden the size of a football field. Some 80 types of roses, bamboo, hostas, phlox and grasses grow here, as Far Eastern meets European garden design. The model for the design was the famous Jardin Majorelle garden of the late fashion designer Yves Saint Laurent in Marrakesh.

The tiles in the Millinger garden shimmer in Majorelle cobalt blue, while the bluebells shine an intense blue. The seating groups are spread out on several levels, water babbles in small fountains and goldfish swim around in a pool.

Although up to 200 people can be seated in the Millinger Theetuin, the atmosphere is always calm and serene. Noise and hustle and bustle are a world away. The wild nature of the Millingerwaard acts as a protective shield for this oasis of calm.

The Millingerwaard river landscape is part of the Gelderse Poort National Park and is located near Kekerdom, directly on the river Waal. Travelling eastward from Amsterdam or Rotterdam, it's about a two-hour train ride.

The Millinger Theetuin is open daily from the end of March to the end of October. It can only be reached on foot or by bicycle.