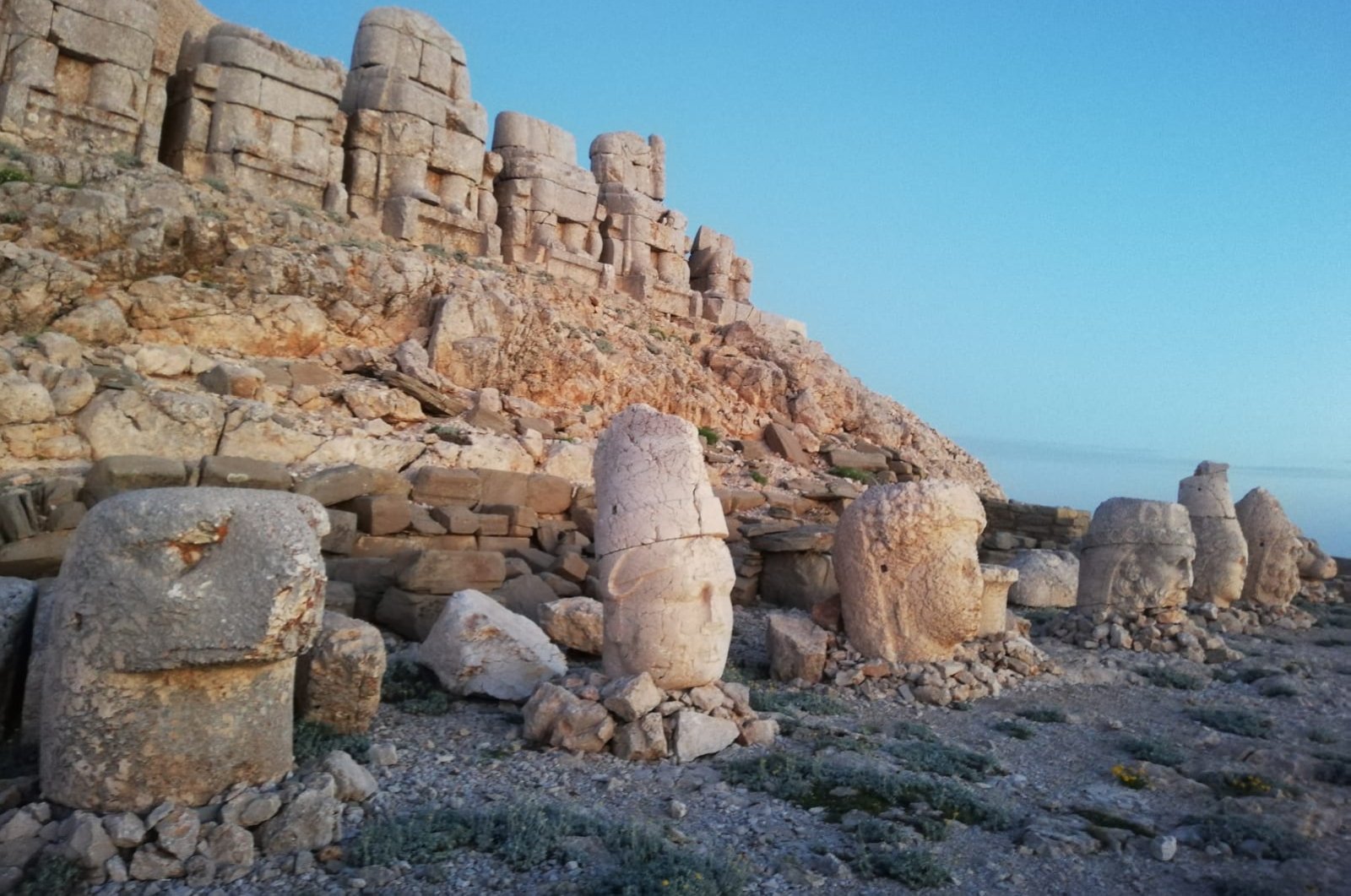 If this awe-inspiring shrine from the Hellenistic period is on your bucket list, don't let the remote location or a shortage of time deter you from a visit. With some planning, you can see Mount Nemrut and other sites in the region in just one weekend

Mount Nemrut in southeastern Adıyaman province is home to one of Turkey’s most enduring and intriguing archaeological wonders.

Perched on the top of the 2,134-meter-tall (nearly 7,000-foot-tall) peak, the mysterious, bodiless, limestone faces of ancient gods from Greek and Persian mythology and a Hellenistic king gaze out at the expanse of the Eastern Taurus mountains. The colossal sculptures are part of the temple-tomb built around 49 B.C. by King Antiochos I of Commagene (69-34 B.C.) as a shrine to himself.

These silent witnesses to history have kept their secrets for over two millennia. Archaeologists still don’t know how the statues were constructed without modern technology or where the body of Antiochos is interred in the complicated tomb complex.

The mysteries of Mount Nemrut present an enticing reason to visit, but its remote location may make an intimidating prospect for travelers who are short on time. But with some determination, it is possible to visit this UNESCO World Heritage Site in the space of a weekend and experience some of the other interesting offerings of Adıyaman province.

Visiting on a weekend during the pandemic, I felt like I had the mountain almost to myself, making it an ideal destination for maintaining social distance.

Besides the stunning spectacle and technological feat of these seated statues with their heads on the ground beneath their feet, one of the most appealing characteristics of this shrine is the diversity it represents. Antiochos descended from an Armenian king and a Greek-Syrian princess. The gods depicted on Mount Nemrut come from both Greek and Persian traditions, while the sculpture of Antiochos wears an Armenian hat.

According to a 237-line Greek inscription on the shrine, Antiochos attempted to start a new cult that amalgamated Greek, Persian and Armenian beliefs and struck a balance between the East and the West.

Before losing their heads, most likely by natural causes such as earthquakes, the statues, carved in a sitting position on the side of an artificial mound, measured about 30 meters tall. Their heads lie at their feet, making it easy for visitors to see the details of their faces.

Travel guides often refer to the east and west terraces of the mountain. What is less clear is that the statues are actually duplicated on each side of the mountain. The statues on the east terrace are larger than those on the west terrace. Archaeologists say the statues on the western side were a sort of practice run before the sculptors carved the more imposing figures on the eastern side. But there also is a deeper meaning, they say: At the time of construction, the Parthian kingdom in the East was more powerful than the Roman Empire in the West.

The easiest way to visit Mount Nemrut is to fly into the city of Adıyaman in the eponymous province. If you want to stay the night in Adıyaman, or in nearby Kahta, you can catch one of the organized sunset tours to Mount Nemrut on Friday or Saturday for around TL 60 (⁓$9) per person. The tours include free pickup from your hotel and typically depart these towns about two hours before sundown. The tour includes stops at a Roman bridge, the Arsemia ruins and the Karakuş Tumulus, the burial place of Antiochos’ family members, including his wife, Isias, a princess from Cappadocia.

Travel guides list the best time to travel to Mount Nemrut as between May and September, but according to a tip from the locals, September is the best time to watch the sun rise on the mountain. The sunrise light is softer, hence it’s easier to take photos, and the sunlight reflects off the river, making it look golden.

For sunrise on a tight time frame, there are a couple of convenient options for lodging. You can stay on the mountain, traveling there by a hired car or hitchhiking. Alternatively, you can stay in the nearest village, where shuttles are available to take you up to the peak early in the morning.

Another option is to stay in Karadut, the village closest to the mountain. Karadut Pension Nemrut, one of the options, offers both lodging and a low-cost shuttle to Mount Nemrut National Park. Lodging prices vary by the season, but during the pandemic, the cost stood at around TL 150 per night.

To get to Karadut village from Adıyaman Airport, you can rent a car or hire a driver to take you there. Or you can take a taxi to the city of Kahta next to Adıyaman and take a low-cost minibus from Kahta to Karadut.

Entrance to Mount Nemrut National Park costs TL 25, and if you want to visit for both sunrise and sunset, you’ll need to buy a separate ticket for each entry.

One advantage of renting a car or having a driver to take you around Adıyaman is the ability to stop and enjoy some of these sites at your leisure (though, you can also see them on tours that start in Adıyaman and Kahta). The Roman-era Bridge of Septimius Severus, now known as the Cendere Bridge, arches over the Cendere River. The water, shaded by a rock canyon and caves, is a popular swimming hole where you can cool off in Adıyaman’s sweltering summer weather. The rocks inside the creek are sharp, though, so pack water shoes to protect your feet if you think you might want to wade into the water.

If you’re interested in learning more about Antiochos' wife Isias and their children, visit their tombs at the Karakuş Tumulus. If you’ve ever seen the Netflix series, “Atiye” ("The Gift"), you will be particularly interested in this site. Isias is depicted as a supernatural character in the series. If you have the time, consider watching the series before visiting Mount Nemrut or Göbeklitepe, the world’s oldest temple located about 190 kilometers away from Mount Nemrut in Şanlıurfa province, because you can learn about some of the local legends surrounding these enigmatic sites. With a rental car or private driver, it’s possible to fit Göbeklitepe into your weekend as well.

Kahta Castle, which is closed to visitors but still offers a magnificent view from the roadway, and the ruins of Arsemia, marked by a sign, are also on the way down the mountain.

During my descent, I encountered a couple of colorful goat herds being directed by a shepherd. I stopped to pet some of the goats and then followed the advice of their shepherd to try some goat dairy products down in town. The region offers a selection of goat cheeses, goat milk, goat yogurt and even ice cream made from goat milk. According to the locals, the best goat ice cream, called maraş dondurması, is made in the city of Kahramanmaraş, which is about 160 kilometers (99 miles) away from Adıyaman. I was trying to fit Mount Nemrut into one weekend and didn’t have the time for a detour to Kahramanmaraş. Fortunately, there are a few shops in Adıyaman that sell maraş, including Marpado Adıyaman and Tatlıcı Serdar Usta on Gölbaşı Caddesi. Locals will say that the goat milk ice cream at these shops doesn’t taste as good as the maraş dondurması made in Kahramanmaraş. For those who have never tried goat milk ice cream, however, it’s still a fun and tasty new experience.

For lunch, I tried a regional delicacy that is available around Turkey but is particularly tasty in southeastern Turkey – çiğ köfte, a spicy vegetarian "meatball" made with bulgur, at Esensoy Çiğ Köfte, a regional chain with locations in Adıyaman and Kahta. You can order a sampler that includes traditional çiğ köfte shaped into oblong balls, çiğ köfte in a crepe and çiğ köfte wrapped up in a roll like a burrito. The delicacy is flavored with a regional spice called isot, made from local hot peppers in nearby Şanlıurfa province.

If typical Turkish coffee makes your face pucker up, then make a point to try Adıyaman’s Turkish coffee selections, which have a lighter roast and smoother taste. Family-owned coffee company Hünkar Adıyaman is on the same street as the ice cream shops. The owner will make you a cup of the coffee to sample, and then you can stock up at the shop or order it online after you get home.

Also on the same street, you can find a bazaar selling local foods, including goat cheese, dried fruits, nuts and other local delicacies.

Even after visiting all of these places, I still had time left in my weekend to check out another major attraction in the region – Göbeklitepe. But whether you stay only in Adıyaman or venture out to other parts of southeastern Turkey, a visit to Mount Nemrut is unforgettable and checks an important and one-of-a-kind world treasure off your bucket list.