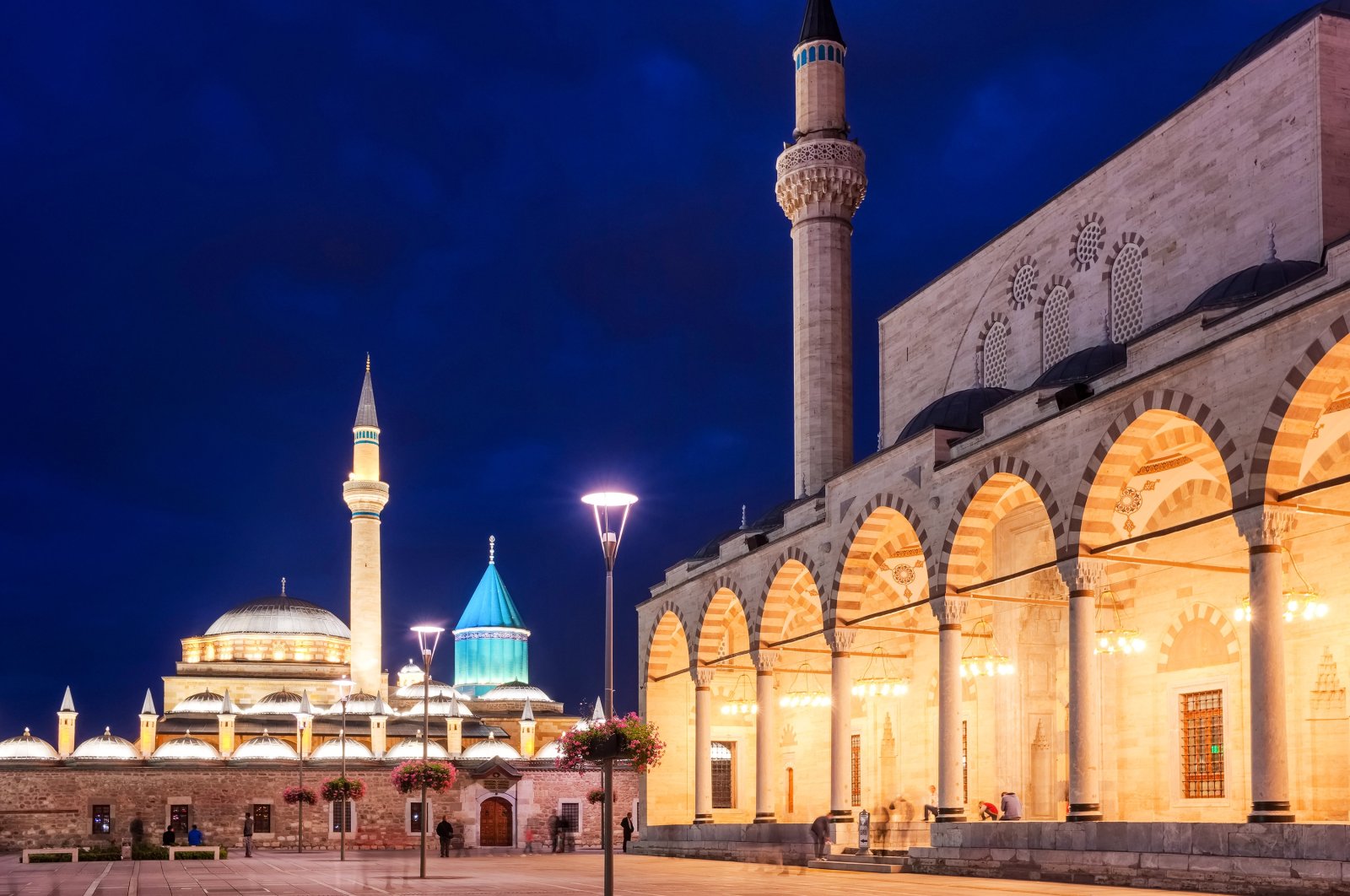 The central square of the old town of Konya with the Mevlana Museum in the background and Selimiye Mosque at night. (Shutterstock Photo)
by Argun Konuk Dec 11, 2020 2:10 pm
Edited By Yasemin Nicola Sakay

Boasting some of the most beautiful and artistic mosques in the country, Konya is Turkey’s pearl of Islamic tourism. In this three-part miniseries, we'll explore the attractions of this historic city and first up is a dose of culture and religion

Recently, I spent three unforgettable days in Konya, a city that is full of marvelous spots to visit. It was just me and my camera as I walked through the city’s beautiful narrow alleys and explored its world-renowned mosques and hidden gems.

With a population of 2.2 million, Konya is the seventh most crowded province in Turkey and the second-most populated one after Ankara in central Anatolia. Konya is known to be a rather conservative city, most famous for being the home of Mevlana Jalaluddin Rumi and the center of Sufism.

Most visitors come here excited to see the whirling dervishes and try some of Konya’s authentic cuisine. However, there is a lot more to Konya, including some relatively new and surprising locations that most tourists are not familiar with.

In my opinion, three days are sufficient to see most places in central Konya. In this Konya series, I will present you with a three-day itinerary over the next three weeks, allowing you to comprehensively experience Konya.

I arrived early in the morning in Konya and went straight to the hotel. After dropping off my belongings, I set out to explore the city. My first stop was the 13th-century Ince Minare Madrassa (“Thin Minaret” religious school) that is currently used as a museum where century-old stone and wooden works are displayed. Standing on the western side of the Alaaddin Hill Park, a circular park at the heart of Konya, this madrassa was built by Sahip Ata Fahrettin Ali, who was the vizier of Seljuk Sultan Izzeddin Keykavus.

I was left awestruck by the beauty of the structure of the building. Standing at the face of the building, you will be confronted by a looming facade with intricate design and beautifully carved religious texts that have been preserved remarkably through the centuries.

The Ince Minaret Madrassa is among the finest examples of ancient Seljuk stonemasonry. Once inside the building, you will see many old artifacts comprising of stonework from the past centuries of recent history.

Only a 10-minute walk away from the Ince Minare Madrassa is Konya Archaeology Museum. To be frank, in comparison to other archaeology museums in Turkey that I have been to, this one is relatively poorly maintained. However, the range of findings and artifacts I saw exhibited is outstanding, with a stunning level of preservation. Although I went there on a Monday when the museum was closed, the security guard must have seen the disappointment on my face as he was kind enough to allow me an hourlong supervised visit.

The museum covers regional history, starting from the Neolithic Period and going through the Bronze Age, Iron Age, the Hellenistic period and up to the Roman and Byzantine eras. Some of the most spectacular artifacts included are the Heracles Sarcophagus, which depicts the story of Hercules and the 12 tasks he needed to complete in order to become a demigod, and inscriptions from the regional historic cities of Iconium, as Konya was formerly called, Derbe and Lystra, which were visited by St. Paul.

As my visit to the museum came to an end, the security guard advised me not to leave the area without seeing the Sahip Ata Külliye, a religious-social complex, which is adjacent to the museum. Although I had done my homework properly in terms of designing my itinerary, this place had somehow slipped through the cracks. Like many religious structures, this complex had a jaw-droppingly beautiful gate, with meticulously detailed carvings of ornaments and patterns.

The name “Sâhip Atâ Fahreddin Ali” has come up a lot in this article. It belongs to a Seljuk vizier who was a very decisive statesman, having played an especially important role in the integrity of the Seljuk Empire during the Mongol invasion of Anatolia.

Adding to his list of accomplishments is the construction of this religious-social complex, which was used for centuries not only as a place of worship and religious teachings but also a place for social gatherings and commerce. It included structures like a Turkish bath, madrassa, shrine, hankah (a place where people gather for religious talks and discussions) and a beautiful fountain.

Even though I did not get a chance to enter this institution due to it being closed on account of the pandemic, I still got to examine the outside of this pleasant church building. The church was constructed in 1910 in memory of St. Paul, who brought Christianity to Iconium. Although he eventually had to leave the city due to threats on his life, he did manage to convert a large percentage of the population living there at the time to Christianity.

Today, this is an active church, and you can still see the Catholic nuns who live here silently going about their days and maintaining this church.

I spent a good two hours resting and relaxing in the grand bazaar of Konya, taking in the city and the lives of people who were passing me by as I sipped on my cup of tea in a quaint open-air tea house. Here, I also had a spectacular view of Aziziye Mosque.

The bazaar is a relatively small but historic area of the city where you can find various small businesses run by locals. Most of these businesses were selling things like artisanal copper works, handcrafted gifts and decor. You will not find many food spots in the bazaar, however, there is a large number of delightful tea shops and bakeries you come across.

I can confidently say that Aziziye Mosque was my favorite place in all of Konya as it was the attraction that fascinated me most. The mosque is rather cube-shaped, built of bricks. Its tall door is accented by beautiful designs in gold, and its equally massive windows seem inspired by typical Catholic church architecture. The inside of the mosque is just as impressive, with gold and white designs on the walls and ceiling.

Among all the Seljuk architecture in Konya, you will find this beautiful, huge Ottoman-era mosque. It was built in 1567 by Ottoman ruler Selim II. The front of the mosque has a large square where you can take wonderful photos of the mosque. Its interior was, indeed, incredibly beautiful with an enormous domed ceiling. Since the mosque is in continued use, it remains well preserved. One interesting and curious feature of the mosque is one of its pulpits, which is designed to look just like the green dome of the nearby Mevlana Museum.

Home to the tomb of Rumi, the famous Sufi poet and mystic, the Mevlana Shrine presently functions as a museum and is one of the most popular and sacred tourist stops in Konya. Most tourists coming to Konya visit the tomb as an important place of pilgrimage. It was initially a rose garden for a Seljuk sultan, however, it was gifted to Rumi upon his invitation to Konya from Transoxiana. It later became his burial place and the lodging place for the whirling dervishes. A hundred years ago, it was converted into a museum, where visitors can see important artifacts and memorabilia from Sufi history, in addition to the tomb. For two weeks every year, visitors can also see the whirling dervishes perform their religious ceremonies. If you’re lucky enough to be in Konya in December, don’t miss the opportunity.