From mountains to minarets: Reconnect with nature, history in Turkey’s Bursa 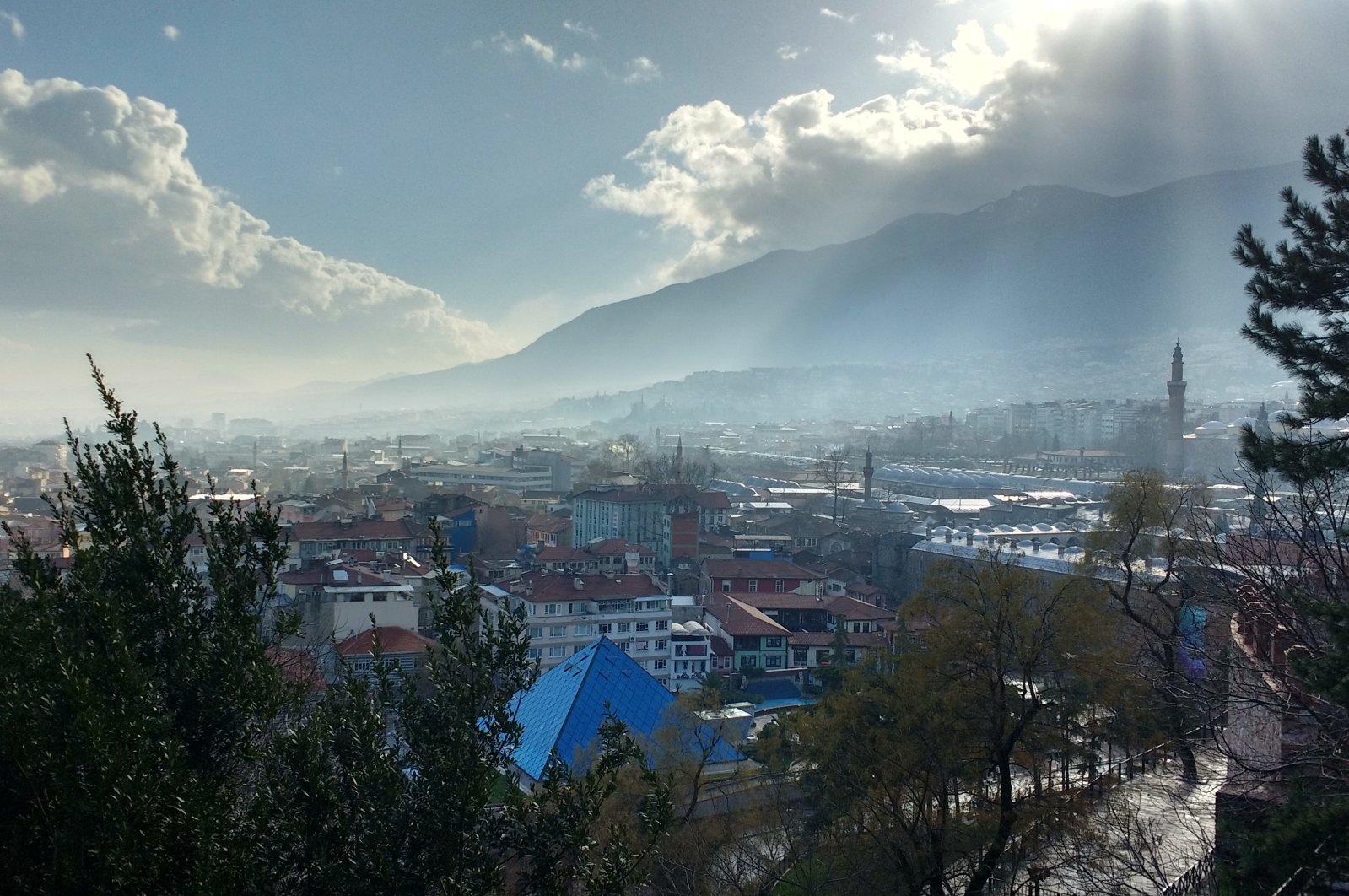 Whether you are a history buff, a thrill-seeker or a foodie, Bursa in northwestern Turkey caters to a wide range of interests year-round and is sure to keep you and your family engaged, inspired and well-fed

The city of Bursa in northwestern Turkey is a gold mine of historical and natural wonders, and one of my favorite low-key getaway destinations in the country. You could easily spend a week exploring the city, inevitably coming home more knowledgeable about Ottoman history and a couple kilograms heavier if you eat too much Iskender kebab.

Nestled at the base of Mount Uludağ, Bursa impresses visitors with its verdant landscape and minaret-marked skyline. The historical center of Bursa is small enough to be walkable, though a tram service and buses can take you to farther-flung areas of the city.

Bursa offers an unusually wide range of high-quality Airbnbs, and I have only had positive experiences at the places where I have stayed. I recommend choosing a spot in a historical neighborhood, such as Yahşibey, for a particularly inspiring stay.

If you thought the Ottomans lived their first glory days in Istanbul, you’re wrong. A trip to Bursa takes you back more than 150 years before the conquest of Istanbul, to the days of Osman Gazi, the founder of the Ottoman state, and his son Orhan Gazi. Visiting their tombs for the first time in Bursa, the first capital of the Ottoman Empire, filled me with a sense of awe for the long history of the Ottomans. Osman Gazi died in Bursa on Aug. 1, 1326 – 694 years ago – and his tomb remains well-preserved to this day.

Stepping into Ulu Cami, or the Grand Mosque, gives you an idea of the grandeur of the Ottoman reign in Bursa. Long before Mimar Sinan was designing mosques across the empire, the Grand Mosque in Bursa was inspiring awe with its feats of architecture and bold, decisive calligraphy. This mosque was commissioned by Sultan Bayezid I and completed in 1399. It has been repaired numerous times throughout its long history, including after an earthquake collapsed its roof in 1855. The huge mosque can hold 5,000 worshippers, and 12 thick columns support the 20 domes of its roof.

Next door to the Grand Mosque is Koza Han, a historic center of silk production and trade, named after the silk worm's cocoon – called "koza" in Turkish. Sultan Bayezid II ordered the construction of the caravanserai in 1490, and the structure opened to commerce the following year. The caravanserai provided lodging, storage and office space for merchants and artisans, particularly through the 16th century. Today, you can still buy silk scarves and souvenirs at Koza Han, which was even visited by Britain’s Queen Elizabeth II in 2008.

Another mosque you will not want to miss in Bursa is the Green Mosque (or Yeşil Cami), named for its green and blue interior tiles. The mosque complex, which also includes a madrassa and bath, was commissioned in 1412 by Sultan Mehmed I (or Mehmed Çelebi), who was laid to rest in the Green Tomb following his death in 1421.

To be honest, my daily schedule on most trips revolves around food. My guiding questions are, how long before I can eat again, and how can I fit in all the specialties I want to try while I am here? Bursa in my book classifies as a foodie city, and I am always hard-pressed to get my fill of my favorite flavors, partly because their most famous specialty fills me up for half a day.

Iskender kebab is at the top of my foodie to-do list every time I visit Bursa and if I can fit it in twice, I am a happy traveler. This dish, invented in Bursa in the late 19th century by a man named Iskender Efendi, consists of thinly sliced döner kebab placed on top of cubed pita bread and slathered with a rich tomato sauce and melted butter. A side of yogurt serves as the perfect accompaniment.

The most famous joint in the city is Kebapçı Iskender in downtown Bursa near Koza Han. Everyone should eat here at least once, in part for the experience itself of dining in the original spot that has been serving up Iskender kebab since 1867. Expect to wait on your feet for at least half an hour for a table. There is always a line. Once you are inside, you will be asked if you want one, one and a half or two portions. A waiter will come around with a fragrant, boiling pan of butter to douse your dish – you can say “no,” but why would you? Do not expect to linger once your meal is over. Your table is needed for the hungry folks waiting in line.

If your Iskender craving cannot wait, head to Kebapçı Hüseyin. The quality is on par and the experience is similar, but the wait is shorter.

The other, similar meat specialty is pideli köfte. Instead of thinly shaved meat, the bread cubes in this dish are topped with Turkish meatballs. I once had this for breakfast, since I was on a particularly tight food schedule that visit. While it does not compare to Iskender kebab, it is a tasty, filling meal.

In my fervor for Bursa’s savory offerings, I circumvented breakfast. However, you would be mistaken if you thought Bursa’s breakfast cannot stand on its own feet. For the best breakfast in the city, take a trip back in time with a visit to the historical Ottoman village of Cumalıkızık. Just 10 kilometers (6.2 miles) from the city center, this village seems frozen in time. Its cobblestone streets are lined with wooden homes and artisans selling their handiworks – which make for unique souvenirs and gifts. It is also where you can get an authentic village breakfast, served to you on a “yer sofrası” (literally, a ground table) as you recline on carpeted cushions.

If you want breakfast to-go – or just have some room to stuff in a bit more, in my case – seek out tahinli pide. As the day progresses, your chances of finding it dwindle, so make it a priority in the morning. This fresh, round pastry filled with sweet tahini is, quite frankly, a masterpiece. I can confidently say there is no better way to eat tahini in Turkey.

There is at least one more culinary treat you cannot miss on your trip to Bursa: candied chestnuts. Bursa is known for producing the country’s best chestnuts, and these sweetened delicacies have been crafted in Bursa since the 1300s. You can also try the chocolate-covered version, which I prefer.

Explore peaks and valleys on skis or foot

One of my favorite things about Bursa is its year-round natural beauty. Whether you visit in summer or winter, Mount Uludağ offers a wealth of hiking trails and places to breathe in the mountain air. If you are traveling on foot and on a budget, you can take a hike along the base of the mountain on one of the roads leading up to higher elevations. Smaller hiker trails branch off these roads and provide verdant nooks to explore.

To see the view from the top of the mountain, take a scenic cable car ride from the Piremir neighborhood. In the summer, the peak provides a refreshing, cooler view of Bursa, perfect for a picnic or nature walk. In the winter, Mount Uludağ offers some of the best skiing in the Marmara region. Many winter vacationers decide to spend their entire visit to Bursa skiing and staying at one of the luxury hotels near the peak.

Even if you are not a skier, it is worth taking a trip up to the winter wonderland atop Mount Uludağ. Strap on your boots, take a trek through the endless drifts of snow near the ski slopes and enjoy a snowball fight. Then, if you are in the mood to treat yourself, stop by one of the hotels for a massage. I recommend Monte Baia Hotel, where you can combine different types of massage to get the experience you want, in a clean, tranquil setting with skilled masseuses.

If you have a car and are willing to travel a bit farther for a hike, head out to Sadağı Canyon near Orhaneli, about 65 kilometers from Bursa city center. This canyon is the second largest in Bursa and is home to the Roman-era Kaya Bath.

To get in touch with nature without leaving the city, visit Soğanlı Botanik Parkı in the Soğanlı district, reachable by bus. This free botanical garden is perfect for a family picnic or taking a bike ride on a rented bicycle. Paved walkways take you beside a duck pond and through themed gardens – including Japanese, French and English gardens, as well as a rose, topiary and rock garden. Spring is the best time to see the many varieties of trees and flowers in full bloom.

Bursa has plenty to offer for animal-lovers, both in terms of exotic and endemic wildlife. The Bursa Zoo is one of the best zoos I have visited in Turkey, in terms of affordability, size and quality. The zoo is a great place to spend the afternoon, especially for children. During our visit in February, many of the animals – from baboons to capybaras – were active and provided plenty of fascination.

Bursa is also a key stopover for migratory birds. About 40 kilometers from Bursa city center is Lake Uluabat in Karacabey, visited by pelicans, storks, spoonbills, ibis, herons, terns, egrets and even the endangered pygmy cormorant at certain times throughout the year. You can spot these many waterfowl species from the bird center and observation tower in Eskikaraağaç. The lake is also home to 21 species of fish, including pike, catfish, herring, carp and chub – some of which can be found for sale in the lakeside villages. If you make the trip out to the lake, be sure to explore the historical streets of the ancient Greek village of Gölyazı on your way back.

Shop on the Silk Road

Bursa has been producing silk since the 500s under Byzantine Emperor Justinian. Still today, the city is one of the best places to buy textiles and houses the headquarters of Özdilek, one of Turkey’s top textile producers. Especially if you are in need of towels, take a stroll through the streets behind Ulu Cami for a textile version of the Grand Bazaar.

If you have extra time and want to learn something new, check out the museums Bursa has to offer. Tofaş’s Bursa Museum of Anatolian Cars takes you on a brief journey of the carriages and cars of Turkish history in the heart of the country's automotive hub The Bursa City Museum also portrays the lives and professions of old Bursa, though the exhibit placards are not translated into English. On one rainy visit, I sought shelter in the Tayyare Culture Center near Koza Han and discovered the wonders of “ebru” art from the artist himself. The building has rotating art galleries, so pop in to see what is on display during your visit. If you are a night owl, you can catch a performance of the whirling dervishes at the Culture Center of Karabaş-ı Veli.

Bursa is a living museum, so be sure to stop and check out any interesting mosques, historical structures or museums you walk by on your trip. I have found many of my favorite places in Bursa simply by wandering on foot and soliciting the advice of locals. You never know what you might find!