Hidden gems of Anatolia: A day in downtown Şanlıurfa and exploring City of Prophets 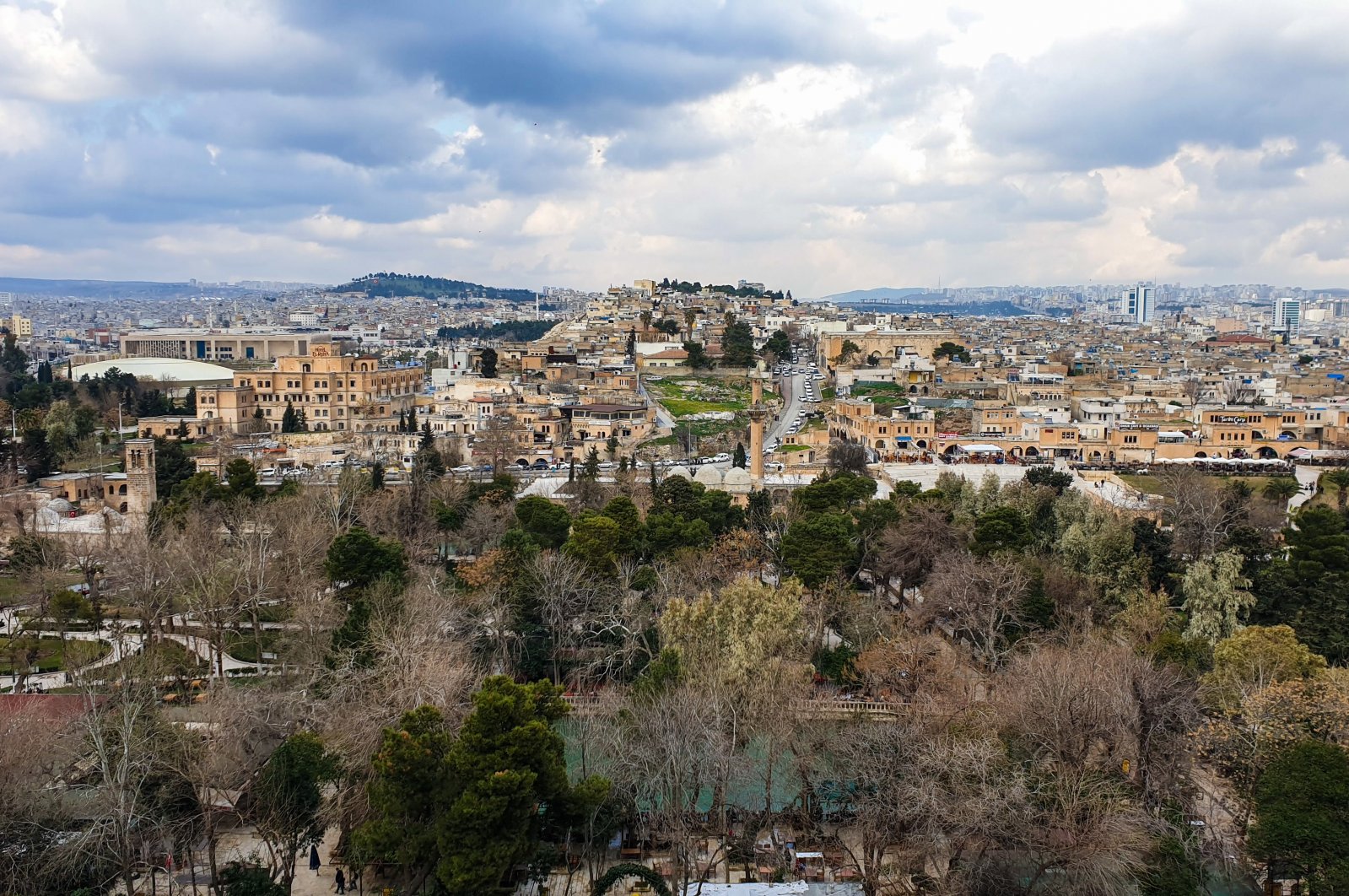 A view of the city of Şanlıurfa high up from the castle walls. (Photo by Argun Konuk)
by Argun Konuk Sep 25, 2020 10:00 am
Edited By Yasemin Nicola Sakay

Anatolia abounds with historical sites and natural wonders. Some are known worldwide while many others await discovery. This week in this seven-part series, we'll explore downtown Şanlıurfa, its spicy cuisine, earthly beauties and millennia-old history

Indisputably, Gaziantep is the most popular destination for tourism in eastern Turkey. Two things come to mind when one speaks of this UNESCO World Heritage gastro-heaven: its rich, world-renowned cuisine and a unique, ancient history.

It’s unfortunate that its near and dear neighbor gets overlooked in comparison. Şanlıurfa, or Urfa, as it was known before, is also called the City of Prophets due to its religious importance, boasts astounding historical sites and offers an unforgettable experience to visitors. To honor Urfa’s heroic resistance against the French troops that occupied it in 1919, the Turkish Grand National Assembly (TGNA) passed an act in 1984 that granted it the prefix of “şanlı” (meaning glorious in Turkish), leading it to now be called Şanlıurfa.

The discovery of Göbeklitepe, the oldest known temple ever discovered in history, spiked Urfa’s international fame. You may also know it from the 2019 Turkish TV series, "Atiye," which is largely centered around Göbeklitepe and has also raised worldwide interest in Urfa.

Şanlıurfa is the seventh-largest city in Turkey and the most populous one in eastern Turkey. And despite its historic importance, it is lamentably devoid of many tourists. Allow me, in today’s article, to introduce you to this mysterious historic city and its lesser-known attractions.

Urfa: From past to present

With a history going back more than 12,000 years, Urfa is in one of the oldest regions in Anatolia. Including prehistoric humans, Urfa has been inhabited by countless empires and kingdoms over the centuries, from the Romans to Seljuks, the Ayyubid Dynasty to the Ottomans and from the Umayyad Caliphate to the County of Edessa (one of the Crusader states). Many prominent forefathers of history waged wars, organized crusades, built cities and invested in trade routes to have a stronghold of the area. While the most groundbreaking archaeological discovery in the area is undoubtedly Göbeklitepe, Urfa itself has a long, exciting history and food culture that gets overlooked by visitors. Let’s look at what the city itself offers.

I started my one-day trip by visiting the Şanlıurfa Archaeology Museum, which currently holds the title of the largest museum of Turkey in terms of the total size of the exhibition area. More than 10,000 artifacts and finds, dating back to different eras, are displayed in the museum. This museum is better described as a complex than a single building, as it encompasses 14 exhibition halls and 33 animation areas where you are provided with captivating insight about the history of the region spanning several time periods. Furthermore, you can pay a visit to the Archeopark where the architectural style of homes from the different periods of history are reproduced, with close to authentic life-sized models.

Another mind-blowing artifact at the museum is the world’s oldest life-sized statue of a man, the Balıklıgöl statue, or Urfa man. Another feature worth attention is the skillfully constructed replica of the Gobeklitepe temple. It was this spot that impressed me the most and left me wondering how these prehistoric humans could shape and carry such huge stone blocks, some of them as heavy as 60 tons.

Including the interior of the exhibition halls, the façade of this enormous building has a very contemporary and stylish design. The ticket costs TL18 ($2.36) and is also valid in the adjacent Haleplibahçe Mosaic Museum.

Haleplibahçe Mosaic Museum is part of the Şanlıurfa Archaeology Museum complex. It displays largely intact mosaics that make up the base of an ancient Roman Villa discovered during construction work. Subsequently, a museum was constructed right over the remains of where the villa once was, and the mosaics are exhibited in-situ (in their original place). This ancient Roman villa is also called the "villa of amazons” since a mosaic of amazon queens hunting was found during excavations. The museum has a circular path built over the mosaics which allows visitors to see every nook and corner of the mosaic floor.

Two other notable mosaic works in the museum include the Ktisis Mosaic, depicting the goddess of the village with a yellow cloak and different accessories, and the Life of Achilles Mosaic, depicting noteworthy scenes from the life of the mythical Greek warrior, Achilles, who was a key personality in the Trojan War.

Located on the east side of the Şanlıurfa Archaeology Museum complex, this mystical necropolis came as a surprise to me as I had not seen it mentioned in travel guides or maps.

This necropolis, carved inside a long rock, was built and used by the Romans, presumably between the third and fourth centuries A.D. There were no visiting hours or entrance fee, however, when I went there in March 2020; the necropolis was closed on account of ongoing excavations. Luckily, the friendly security guard at the site, Mehmet Bey, allowed me to look around as long as I didn’t approach the excavation site, which was a delight.

Balıklıgöl (known also as the Pool of Abraham and Halil-Ür Rahman Lake) is a 150-meter-long (492-foot-long) sacred pond that is in the heart of Urfa. The pond and the thousands of carp fish in it are of great religious importance and are considered sacred.

As legends go, Prophet Abraham challenged King Nimrod and waged a war on his idolatry beliefs, purporting that there is only one god. The final straw for the king was when his daughter fell in love with the Prophet Abraham. Incensed, King Nimrod ordered a huge fire pit to be lit and Prophet Abraham to be executed by being thrown into it. As he was tossed into the flames, God said: "Oh fire, be cool and secure to Abraham." Miraculously, the fire turned into water and the logs into carp fish.

Balıklıgöl and the park it is located in were tranquil and well-organized. It is a picturesque lake to roam around. The sacred fish in it are probably among the most privileged finned creatures in the world as they get fed abundantly every day in crystal clear waters. I bought a cup of fish feed from a local vendor and fed these mythical carps.

Ayn Zeliha Lake is near Balıklıgöl and according to myth, is formed from the tears of King Nimrod’s daughter, Zeliha, who could not bear to see her beloved Abraham thrown into the fire.

According to another slightly different account, Zeliha also threw herself into the fire after seeing Abraham being thrown to flames. The place she took her own life is now Aynzeliha Lake.

While nearby Balıklıgöl, Aynzeliha Lake was more peaceful and beautiful to me. Its size is smaller than Balıklıgöl, and it is surrounded by tall trees that serve as a natural canopy. To take in the view, I sat and had a delicious cup of tea at the tea garden adjoining the lake.

Şanlıurfa Castle offers the best view of the city. However, due to ongoing excavations and restoration work, the castle is currently closed. It may still be worth going up to its gate to get some nice photos of the city.

Dergah Mosque, the cave where Prophet Abraham is said to be born

Urfa hosts another holy site which is of vital influence in Islam. The cave where Prophet Abraham was born is believed to be within the Dergah Mosque complex. The entrance to the cave is free; however, you can donate any amount if you wish to contribute to the maintenance of the mosque and the cave.

Today, the cave is partially flooded, and the water source is considered to be one of the holiest by the locals after the Zamzam Well.

Lunch break at the Covered Bazaar

Having seen the main sites around Balıklıgöl, I set out to explore the Covered Grand Bazaar of Urfa. The path leading to the bazaar from Dergah Mosque is full of small shops where various things, from spices to copper artisanal works and carpets, can be found.

Before I ventured into the narrow alleys of the bazaar, I wanted to try a local specialty from an authentic kebab shop. In Turkey, the authenticity and quality of local shops are always a safe bet, particularly in historic bazaars, so I just sat in the first place I found. I ordered a single portion of liver kebab, a specialty of Urfa, which came served with thin bread and grilled vegetables. In Urfa, onions are heavily consumed with every meal, so a basket of fresh onions and a knife was placed in front of me to cut my own onions – a perfect way of saving manpower.

As is the custom in Turkey, after having food, we crave dessert as the grand finale of the eating experience. I had read that Şıllık is a local dessert in Urfa, adapted from Syrian cuisine, and was highly recommended to try it. Şıllık is a simple dessert made from a few crepe-like layers with crumbs of walnut, drenched in simple sugar syrup and topped with pistachio crumbs. While it looks heavy, Şıllık has a light taste and won’t give you a sugar crash.

Gümrük Han is located inside the covered bazaar and is famous for its unique coffee recipe. I stopped by this authentic, open-air hall where coffee shops and kebab shops are plenty and started my Urfa coffee tasting with mırra, or as I prefer to call it, “Urfa Espresso.” In its amount and taste, it is like espresso, so as you might surmise, mırra is very bitter. Being a firm coffee lover, it was a delight; however, if you are not fond of bitter coffee, I would recommend you try menengiç coffee.

Menengiç is pistachio-flavored coffee served in Turkish coffee cups. The way it is prepared is unique in comparison with other parts of Turkey. Menengiç is served with a thick layer of pistachio crumbs covering the coffee. I loved the taste, as well as Gümrük Han, which was an ideal spot to observe the daily life of locals as I sipped my coffee.

Wandering around the narrow alleys of the covered bazaar, I stumbled upon an intriguing spot, the Culinary Museum. It is a small museum built in a historic mansion and has highly informative exhibitions about the cuisine of Urfa. The entrance is free, and the museum is highly recommended.

It wouldn’t count if you left Urfa without attending a “sıra gecesi.” These are traditional gatherings in the evening, full of drinks, food and traditional music, singing and maybe even some dancing. After a long day, it was incredibly fun to experience the nightlife in Urfa. Be hungry, as you’ll likely be eating a lot.

While most people associate Urfa with Göbeklitepe, the city itself is one of the most ancient in the world. While you won’t find many tourists, it is a bustling city with a lot to see. If you’re planning a trip to Göbeklitepe or the nearby Harran, it is worth adding a full day to explore all the attractions in this beautiful city.