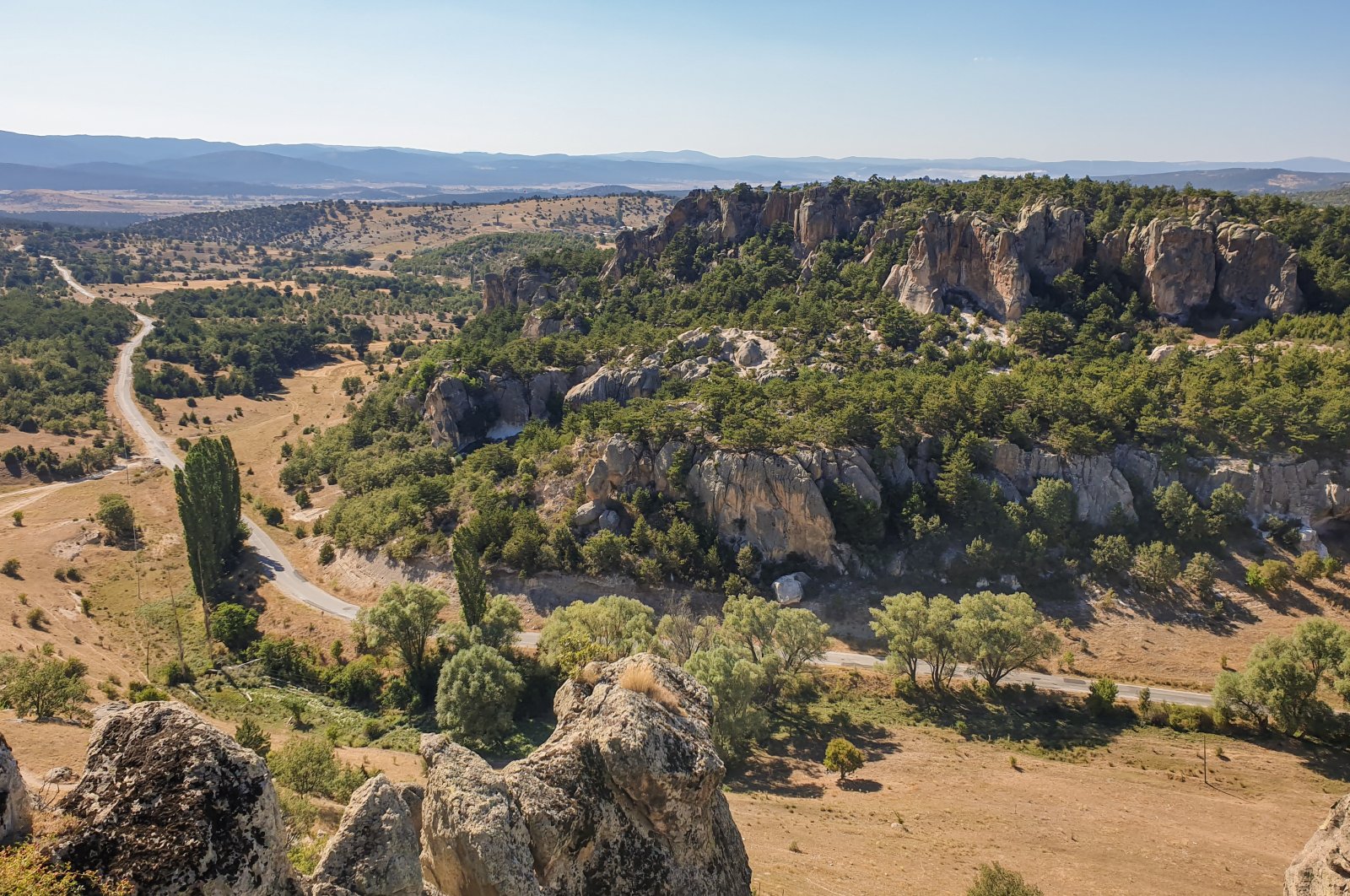 Anatolia abounds with historical sites and natural wonders. Some are known worldwide while many others await discovery. This week in this travel series, we'll explore Yazılıkaya, also known as the ancient city of Midas, and the old Phrygian ruins scattered around it

Anatolia, or Asia Minor, is often called the “cradle of civilizations.” It is among the most archaic and diverse lands on Earth in terms of history and culture. Many prominent contributors to our common heritage, from the Hittites and the Romans to the Ottomans to Byzantines, inhabited Anatolian soil and left a testimony of their unique ways in the form of artifacts and breathtaking ruins you’ll find in every nook and corner of the region.

This week, I want to delve into Yazılıkaya, built by the Phrygians, who left a glorious legacy and spectacular ancient ruins that are among the most well-preserved in Turkey, despite being thousands of years old. Yazılıkaya is located near Yazılıkaya village, which is a part of Han district in the northwestern province of Eskişehir.

So, grab your tea or coffee and take a historical trip back in time to the ancient Phrygian era to discover what gems it beholds.

A BRIEF HISTORY OF THE ANCIENT CITY OF MIDAS

Both the ancient settlement and the monument are named Yazılıkaya, or sometimes, the ancient city of Midas, after the legendary King Midas, a popular figure in Greek mythology known for having the "ears of an ass" and his "golden touch" that turned everything he laid hands on into gold.

Locals named the site Yazılıkaya (meaning the rock with writing on it) due to the inscriptions in the ancient Phrygian language on the monument. Midas is more of an official historical name granted to the site and the monument, after the word “Midai” was discovered engraved on the monument, describing the region.

Evidence garnered during archaeological excavations suggests that the earliest human activity in the area dates back to 3,000 B.C. Fast-forward more than two millennia later to the last quarter of the eighth century B.C., and the Phrygians nestled themselves in Yazılıkaya Valley. It is believed that Phrygians settled in Anatolia after the fall of the mighty Hittites, soon establishing their own kingdom in Gordion – ancient city where legend says Alexander the Great cut the tangled knot — to become the dominant power in the west-central part of the region, later rivaling Assyrians and Urartians in the east. Located on the right bank of Sakarya River in the Polatlı district in modern-day Ankara, you can reach the ruins of Gordion with a two-hour drive from Yazılıkaya.

Archaeological research has established that Yazılıkaya currently boasts the highest number of religious monuments and structures discovered in the Phrygian civilization and was one of the most important religious centers of the kingdom at the time.

One intriguing historical fact about Yazılıkaya is that the settlement was not abandoned following the collapse of the Phrygian Kingdom. On the contrary, countless additions were made to the existing structures and monuments by the successors of the city during the Hellenistic, Persian, Roman and Byzantine eras.

Seventeen meters (55.8 feet) tall and 16.5 meters wide, the Midas Monument, also known as the Grand Monument, in Yazılıkaya is the largest Phrygian rock-cut monument ever discovered. It is the first and a rather glorious sight that welcomes you as you enter Yazılıkaya Valley.

The flat ground looking up at the monument was used as an open-air temple by the Phrygians and was built in the name of the Mother Goddess (Magna Matar) Kubileya (Greek: Cybele). Not to be missed are some surviving inscriptions carved in the Phrygian language on the upper left section of the monument, which is easily discernable to those looking up to it from below. You’ll have to lean back your head to get a good look, but it’s definitely worth it.

Only a few steps away to the right side of the Midas Monument, the Kırkgöz Rock consists of chambers that were carved into one huge boulder. It is named as such since the rooms carved inside the boulder make it appear as if it has dozens of eyes, with Kırkgöz meaning “40 eyes” in Turkish. This structure was first built during Hellenistic times, then used by the Romans and Byzantines.

Tragically, the rooms are severely damaged from vandalism. The plaster covering the walls of the rooms are carved with the names of lovers and random figures using knives and sharp objects.

On the eastern side of Kırkgöz Rock, there is a rock-cut tomb dating back to the Hellenistic era.

Another notable site in Yazılıkaya Valley is the Unfinished Monument. You may notice architectural similarities between the Midas Monument and the Unfinished Monument as it was built with the intention of being a smaller version of it. It was built using a unique carving system, in which the surface of the rock was first flattened and then builders worked from top to bottom, carving designs and inscriptions. It was left unfinished halfway, which is why it has been a great source of insight for archaeologists who have been able to acquire an understanding of the ancient rock carving techniques used by the Phrygians to build monuments.

After the Unfinished Monument, the path soon bifurcates. If you go right, you will find the Monumental Tomb carved into the base of the side of the cliff. It may be easy to miss as it is underground, so look out for a signboard. It is a small chamber with a small window, blocked from the entry with iron bars. The ceiling and the walls of the chamber have a well-preserved design.

Besides the Midas Monument, some of the most marvelous structures for me were the deep cisterns located in different parts of Yazılıkaya Valley.

There are three very big cisterns located along the path that goes forth from the Midas Monument. These were the main sources of water for the ancient settlement back in the Phrygian era.

Over the centuries, the rock-cut staircases going down to the cisterns have eroded significantly and are now mostly covered with slippery algae. As such, I strongly suggest that you don’t try going down them as it can be dangerous. Admittedly, I almost lost my balance and nearly injured myself doing so. You’ll find the first cistern right after the Midas Monument. The other two are at the very end of the path, after the Monumental Tomb. On the right side of the Monumental Tomb, you will see a narrow path going onward. The path will take you to the final two cisterns.

The third cistern can be entered safely. The stairs are still well-shaped, and since it is located underground, the cistern is like a natural refrigerator. This felt like nature’s gift to me as it was a much-needed refuge from the heat.

Where the path bifurcates, take the path to the left and you will find yourself going up a hill. What awaits you is an ancient altar, offering a beautiful view of Yazılıkaya Valley. Except for a few rock-carved stairs, not much has survived the times. However, the view is worth a visit.

Locals always have insightful and unique stories to tell about the region. As I was exploring Kırkgöz Rock, I saw a local sitting on a pillow near one of the rooms. As it turned out, his name was Veysel Bey, and he was the guard looking after the monument. A 30-minute conversation with him revealed many interesting things about the area.

Here are his words: “We, the residents of Yazılıkaya village, are the Karaçay (Karachay) Turks. We are natives to The Caucasus. We migrated all the way from Caucasia to Eskişehir more than a hundred years ago. We are the inhabitants of this area and guard this ancient valley. Before me, my dad was protecting this place, and before him, my grandfather was doing the same.”

Moreover, Veysel Bey pointed out a deep hole by Kırkgöz Rock and told me that a cool draft blows from the hole. He pointed toward a few hills on the horizon where, he claimed, lie the ruins of an old Phrygian castle. The draft coming from the hole alludes to the possibility that underground tunnels exist that connect various parts of the region and extend beneath the hills for kilometers. He said that while this has never been investigated by archaeologists, it is common knowledge among the locals.

Hot and hungry after the hike, I made my way to a small cafe, near the entrance of Yazılıkaya to grab a snack. Little did I expect that my visit would result in me tasting authentic Karaçay Turkish cuisine.

Run by local Karachays in the village, this cozy cafe is built in a quaint wooden hut. I was welcomed warmly by the owner, Cevdet Bey, who I found to be very friendly and hospitable. Cevdet Bey and his mother showed me the treats they had, which included homemade pastries and cheeses, and briefly described the history of their cuisine.

I was told to try hıçın böreği, which is a local flatbread filled with cheese, potatoes, minced meat or green vegetables. Typical Turkish pastries can have a high-fat content. What sets hıçın böreği apart from the others is that it is prepared without a drop of oil. It is steamed and is super light and delicious.

OTHER NOTABLE ATTRACTIONS NEARBY

There are three easily accessible attractions near Yazılıkaya that I visited: Yapıldak Asar Kale, Arezastin Monument (also known as Little Yazılıkaya due to their architectural similarities) and the Gerdekkaya Monument. I do not recommend that you drive to the other surrounding historical spots due to the bad road conditions unless you have a suitable vehicle.

A short drive from Yazılıkaya village, Yapıldak Asar Kale is a small monumental chamber carved on the top of a rock that requires a somewhat challenging 10-minute climb. You can get there by following the signboards from Yazılıkaya village. You will need to park your car by the side of the road and cross a small patch of field to reach it.

Public transportation to the village

There is no public transportation going to Yazılıkaya. The ancient settlement is located 71 kilometers (a 1 hour, 10-minute drive) from central Eskişehir. Whether it’s winter or summer, reward yourself with a nice road trip to Yazılıkaya and wander around the stunning Phrygian ruins.