Hidden gems of Anatolia: Yediler Monastery and a rewarding hike at Lake Bafa 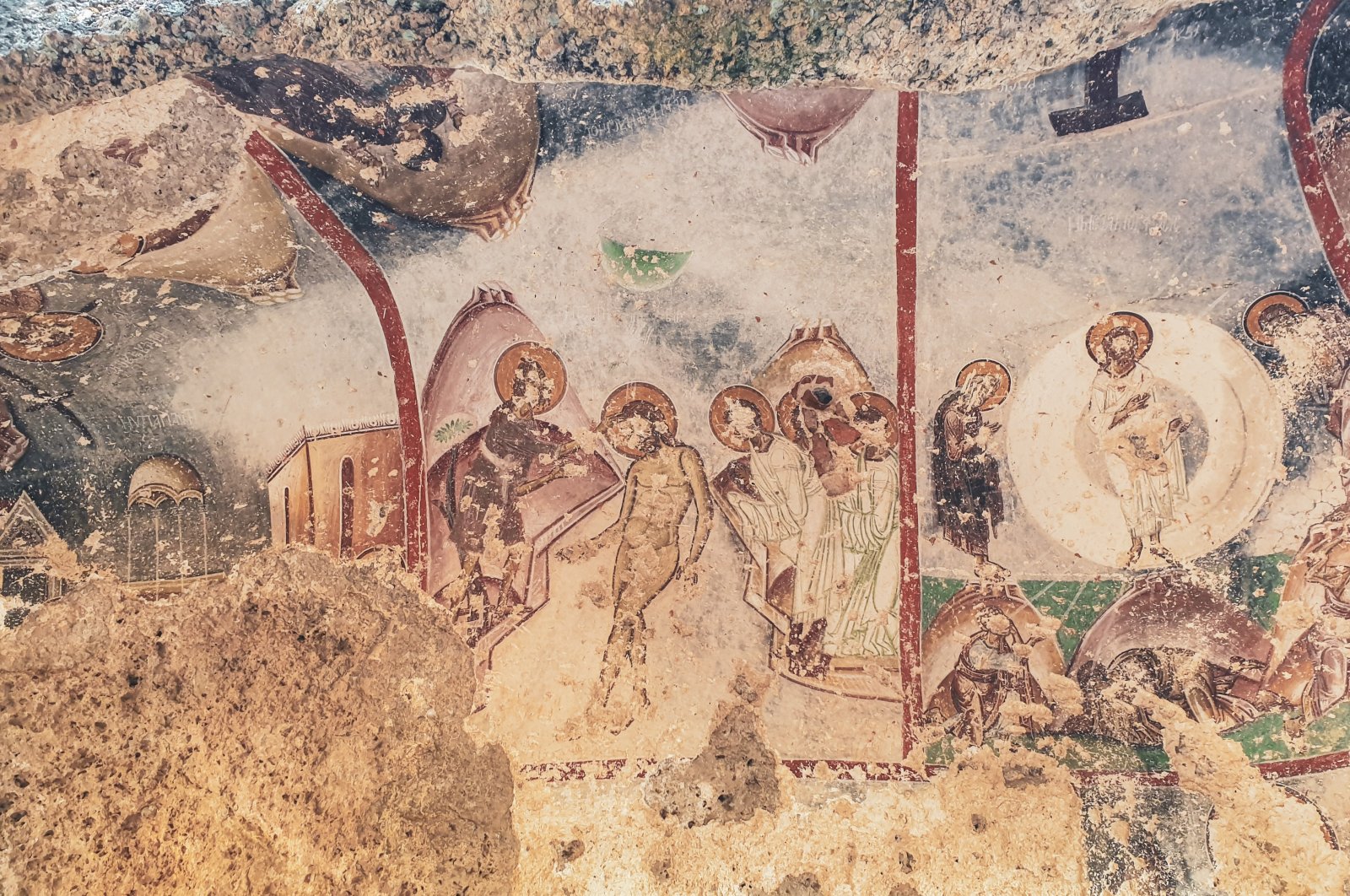 Frescoes located on the northeast side of the Yediler Monastery depict scenes from Jesus Christ’s life, Muğla, Turkey. (Photo by Argun Konuk)
by Argun Konuk Aug 28, 2020 8:53 am

Anatolia abounds with historical sites and natural wonders. Some of them are known worldwide but many others await discovery. In this seven-part series, this week we'll explore Lake Bafa and a hidden monastery high up in the mountains

Located in the southwestern provinces of Muğla and Aydın, Lake Bafa is the largest freshwater lake in Turkey's Aegean region. Rock-cut graves, temple ruins, an agora and an island with an ancient castle are just some of the sights it offers. There is also the Yediler Monastery, high up in the Beşparmak Mountains, that most people are either unaware of or hesitate to visit due to a notoriously "killer" hike.

Abutting the Beşparmak Mountains, which is a part of the Menteşe Mountain Range, Lake Bafa is inhabited by more than 200 different species of birds, more than 20 types of reptiles and 15 types of mammals. It is one of the most underappreciated spots in Turkey. Especially this summer, when uncrowded places are in demand and safer to visit with the coronavirus pandemic, Lake Bafa makes for a perfect vacation spot.

Yediler Monastery does not receive many visitors. The main reasons behind its unpopularity are the monastery’s remote, hard-to-reach location and disinformation about how to get there, both of which give people cold feet.

When I visited Lake Bafa, I was oblivious about how to get to the Yediler Monastery. Everyone I asked gave me different instructions regarding how to get there and how long the hike would take, and while a signboard was present, it was of little help. In today’s article, I will be debunking misinformation about the monastery and provide you with more insightful tips about this hidden gem.

So, what significance does Yediler Monastery hold?

A brief history of Yediler Monastery

It is assumed that Yediler Monastery (also known as the Monastery of the Seven Brothers) was built in the seventh century. It was among some of the most important monasteries in the area. Around the ninth century, on account of Arab raids, many monks and priests sought refuge in the monastery. Its remote location served as a natural safeguard and protected its residents for years.

Water wells in the monastery were built during these years to find a solution for a lack of freshwater and to avoid residents getting noticed because of having to go down to Lake Bafa to get water. The fortified walls of the monastery were also built against the threat of Arab raids to protect it against possible enemy attacks.

On the south side of the monastery, the remains of a kitchen and a cellar can be found. Yediler Monastery was far from being a wealthy religious complex, however, the priests and monks were exempt from paying taxes, which allowed them to live a decent life.

What you need to know before you visit

Before your visit, it is best to be prepared. I would advise you to bring ample water, should you be visiting during the summer, and perhaps some snacks to keep up your energy. Wearing proper hiking shoes is necessary, as is putting on plenty of sunscreens to avoid sunburns.

Getting to Lake Bafa by car

Kapkırı village, located on the coast of Lake Bafa, is where most of the historical sites are at. The roads are narrow, but generally in good condition and easily navigable. However, you may encounter some farm animals that have taken to standing in the middle of the road. Therefore, I suggest you drive carefully and enjoy the remarkable scenery along the way.

Public transportation to the area is not nonexistent, however, it is very limited. From the town of Milas, minibuses do go to Lake Bafa. Besides, buses and minibuses going from Söke to Milas and Bodrum pass through the town of Bafa, which is on the main highway near the lake.

Where to park for Yediler Monastery

The closest settlement to Yediler Monastery is Gölyaka village. Gölyaka is very close to Kapkırı village, at about a five-minute drive.

Visiting the area by car, it was cumbersome to find a suitable parking spot. When I asked the locals of Gölyaka, they all advised me to park in the main square of the village and walk from there. The locals were amusing people, all rather on in years but cheerful and friendly. One of the local men, a little bit of a celebrity in the region, introduced himself as a singer, actor and author and mentioned a documentary that was made about him. He made me promise that I'd watch it in return for a bottle of ice-cold water.

Back to the topic of parking, here’s a tip that will save you a 30-minute walk. Instead of leaving your vehicle at the main square, take the left junction on an upward slope and stay on it for a few minutes until a signboard pointing toward the start of the hiking trail is visible. There should be enough space for you to comfortably leave your car there for a few hours. This is the best stop to park and start your hike. The road is not in perfect condition but is comfortable enough for experienced drivers.

My car was safeguarded by the local horses and cattle who respectfully stood near it and did not move an inch in the entire three hours it took for me to return from the hike!

Information about the hike

How long does the hike take?

Several locals I talked to said that I would need at least six hours to complete the hike, and some even said it might take a whole day. In reality, hiking up to the monastery at a steady pace took me no more than 1 1/2 hours, exploring the monastery took me an hour, and hiking back down took one hour and 15 minutes.

Of course, the total visit time will depend on your speed and how much time you spend exploring the monastery. I had almost changed my mind about visiting the monastery when the locals claimed it would take hours. However, if you are an occasional hiker, half a day would suffice to visit Yediler Monastery and the surrounding sites.

The hiking trail can be slightly confusing at times, but nothing a little patience and common sense won’t settle. There are red and white marks on the rocks every few meters for you to follow.

Yediler Monastery consists of small chapels, churches and houses where the monks lived as well as water wells and various rooms. Except for a signboard giving general information about the site, there aren’t any other signboards about the ruins. You may want to turn it into a creative history game and name the structures you see! Here are some of the notable things you’ll find.

Ruins atop a boulder

The ruins of a structure atop a large boulder are presumably those of an old chapel. It is not accessible by foot, but an impressive sight to see nevertheless.

There are dozens of rooms where the monks once lived. The walls and windows of these rooms are still perfectly intact. These rooms also offer a marvelous view of Lake Bafa and the Beşparmak Mountain, making them a perfect place to catch your breath.

The carved boulder with frescoes of Jesus Christ

Considered notable but deteriorating, the frescoes of scenes from Jesus Christ’s life are located on the northeast side of the monastery. It might be difficult to find the frescoes since they are inside a huge boulder where a room might have once existed. The colors of these frescoes are vivid, brilliant and beautiful to look at.

The castle walls of the monastery

Presumably, the fortified walls were built for defense purposes during times when Lake Bafa suffered from Arab raids. In addition to the walls, there are many unidentified structures such as rooms half-buried under the ground, as well as tunnel entrances.

Despite the scorching summer heat, which did not make this hike easy, this was easily one of the most memorable sites I have ever visited. If you happen to visit this region, make sure Lake Bafa and Yediler Monastery are on your travel list!