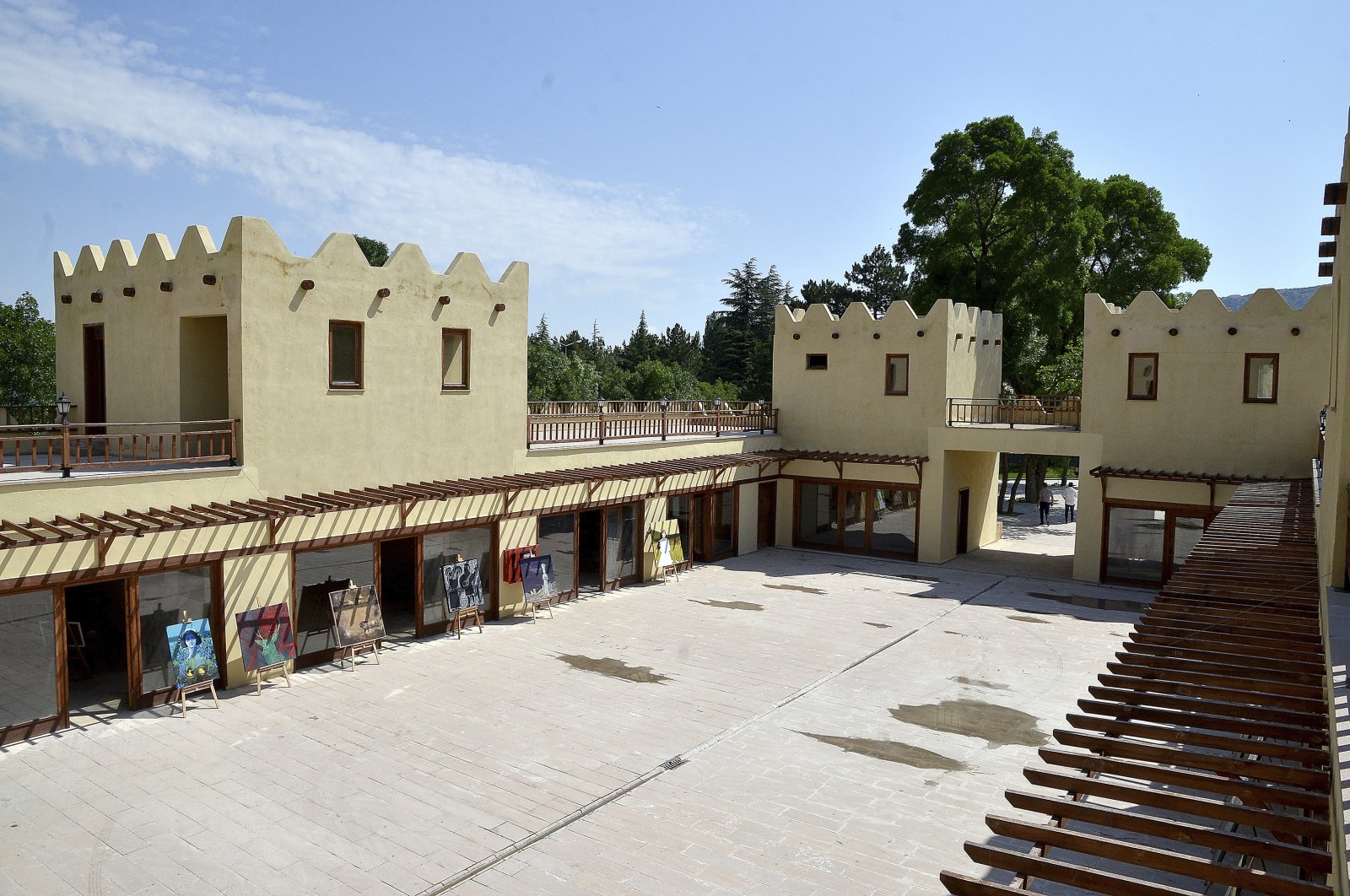 Visitors will witness daily life as it was 3,500 years ago in the village built in Hattusa, the ancient capital of the Hittites, in central Çorum province

The Boğazkale District Governorate started the Hittite Village Project in 2016 so that tourists coming to Hattusa, the capital of the Hittites and a historical national park, would enjoy their trip. The Hittite village was built with a budget of TL 2,406,000 ($350,493) within the scope of a project supported by the Central Black Sea Development Agency (OKA). The village's walls bear Hittite motifs, and lion statues stand guard at both sides of the entrance.

The ground floor of the Hittite village consists of a cafeteria, art gallery, manufacturing shop and sales department allocated to Boğazkale Women Entrepreneurs Cooperative, while the second floor will serve as a guest house. Tourists will witness the daily life of the Hittites as it was 3,500 years ago, while women in the district will be able to each income by selling their handmade products in the village.

Çorum Gov. Mustafa Çiftçi visited the completed Hittite village and received information about the final status of the project from Boğazkale District Gov. Yunus Ataman. Speaking to journalists after the visit, Çiftçi stated that the Hittite Village Project has been implemented in two stages: the construction of the building and environmental planning.

Indicating that the construction of the building, which is in the form of a fortification, cost TL 1.43 million, Çiftçi noted that TL 800,000 of the costs was covered by OKA and the remaining TL 630,000 was provided by the Çorum Special Administration.

Following the construction of the building, the need for landscaping arose, Çiftçi said, adding: “In the second stage of the project, garden planning and landscaping were carried out with a budget of approximately TL 1 million. Of this, TL 670,000 was covered by OKA, TL 280,000 by the the Special Provincial Administration and TL 26,000 by the Union to Provide Services to Villages."

"The project carried out under the coordination of Boğazkale Governorate has been completed today," he added.

Underlining that the Hittite Village Project has changed the face of Boğazkale, Çiftçi said: "A positive result has been achieved. I hope this place will attract more people as it has been given a unique function and identity for the future."

"A shop has also been set up inside the premises which is run by the Women Entrepreneurs Cooperative. Women produce and sell their handmade products here. Quite a lot of projects are being initiated in Boğazkale to preserve the history of the area, and these are funded by many sources. I hope that the works will prove beneficial for our district," Çiftçi said.

Hattusa, which is one of the most significant tourist destinations in Turkey, serves as an open-air museum with 6-kilometer- (nearly 4 mile) long city walls, monumental city gates, a 71-meter- (78 yard) long underground passage, the Hittites palace in Büyükkale, 31 unearthed temples and ancient wheat silos. It was added to the World Heritage List of United Nations Educational, Scientific and Cultural Organization (UNESCO) in 1986 due to its well-protected architectural structures and excavation site. It also has also held UNESCO’s title of "Memory of the World" since 2001 with its cuneiform scripts representing the oldest known form of Indo-European languages.

Hattusa served as the capital of the Hittite Empire, which was one of the civilizations that played an important role in the development of urban life, in the late Bronze Age. The capital was the first national excavation site in Turkey.

While the Boğazkale District Governorate has been working on promoting Hattusa by enabling the people of the region to generate tourism income, it also completed the first stage of the virtual reality (VR) project, prepared for the purpose of offering an opportunity to visit the ancient city as it was 3,500 years ago via an application.

Visitors will now be able to download the application, visit the area of the Great Temple in Hattusa as it was 35 centuries ago in 3D and learn about the structures and artifacts there.

The project is aimed at offering an opportunity to visit the entire city of Hattusa in a 3D environment through the VR app. Ten more locations will be added to the app, including Aslanlı Kapı (Lion Gate), Yer Kapı (Ground Gate) and Kral Kapı (King Gate).

Speaking to journalists, Boğazkale District Gov. Ataman said that Hattusa, the first capital in Anatolia, is one of the most important historical cities to guide world history, noting that archaeological excavations have been ongoing in the region for 114 years. As a result of the excavations, a large part of the city has been unearthed, but due to the wear and tear with the passage of time and the construction of the buildings using mudbrick, only the foundations of structures are visible today, Ataman said.

"We have prepared the augmented reality project in order to enable guests coming to the district to gain more detailed information about the Hittite civilization and Hattusa and to show the city as it was 3,500 years ago. We have implemented the first stage at the Great Temple. The visitors will be able to download the related application, see the temple area in three dimensions, visit the inside (of the temple) and gain information about the history and features of the structure through sound recordings in the application. In the following stages of the project, we want to put this application into operation in 10 areas here," he said.