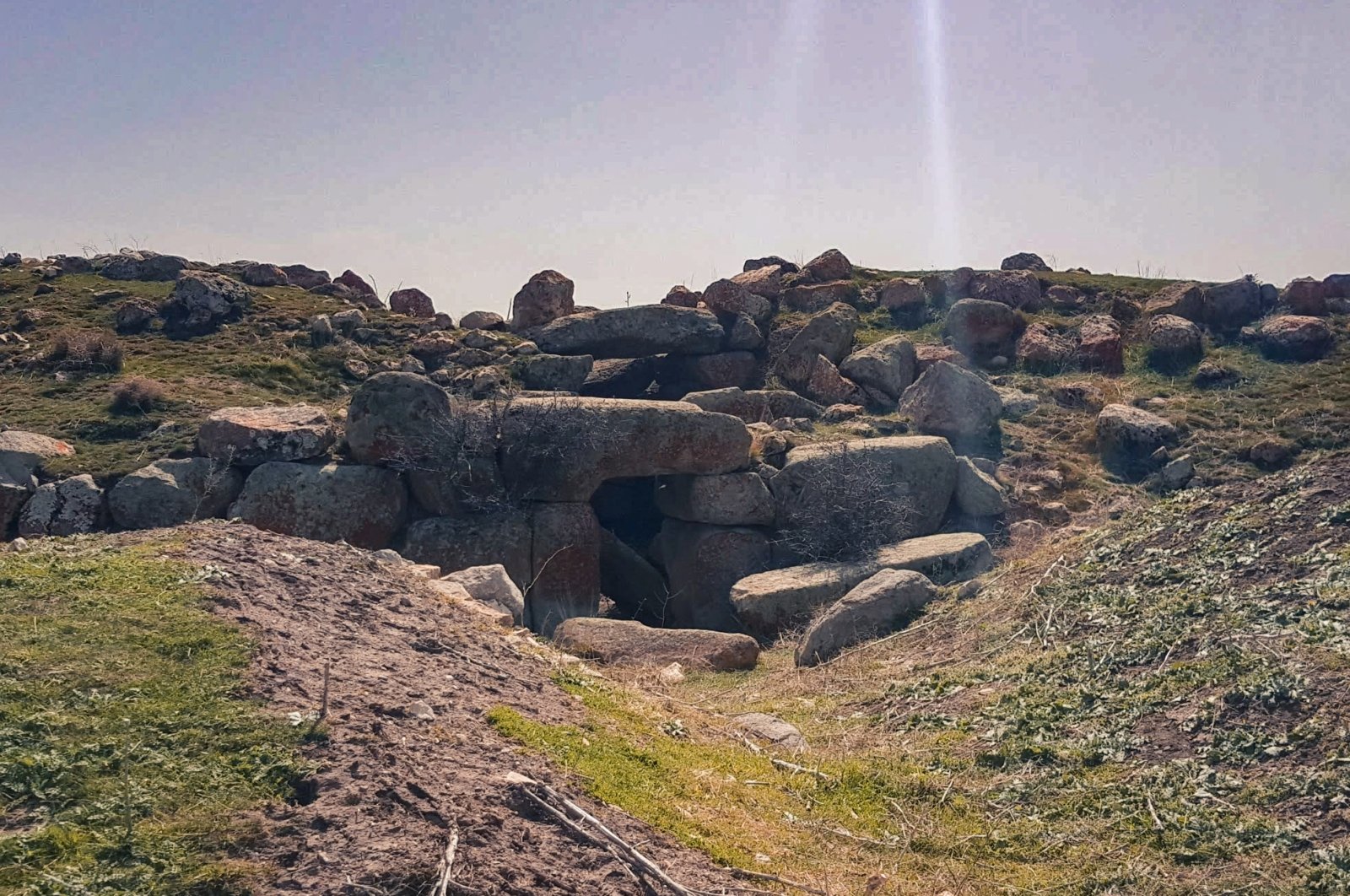 The path leading to the chamber at ruins of Gavurkale and its entrance in Haymana district, Ankara. (Photo by Argun Konuk)
by Argun Konuk Oct 09, 2020 9:55 am

Unfairly thought of as a boring and dull city with limited attractions and activities, Ankara is often cast in a negative light, especially when compared to Istanbul and other tourism hotspots. This eight-part miniseries aims to fight this inherent bias about the Turkish capital

Ankara has played an instrumental part in the history of the Republic of Turkey, but its administerial role and recent history have only solidified its reputation as another boring, gray capital city. Unknown to most, Ankara was inhabited by countless empires and kingdoms including the Hittites, Phrygians, Lydians, Galatians, Persians, Romans, Byzantines, Seljuks and Ottomans, with treasures from the past buried in almost every inch of the city.

As part of this eight-part series, we’ll travel to overlooked spots in the city, this week visiting Ankara’s suburban district of Haymana, where countless ancient Hittite ruins remain undiscovered – the most outstanding ones to date being the Gavurkale Hittite Castle and Warrior Rock Reliefs.

Let's begin, shall we?

Gavurkale is not the sort of place you'll find on a map or in a travel guide. In fact, I found the stunning ancient attraction by sheer luck as I was examining the surroundings of Ankara on Google Maps, and since then, every time I have visited Gavurkale I have been the only one there. The ruins are located in Haymana, close to the bordering Gölbaşı district.

Initial excavations and research at Gavurkale were conducted in 1930 by a team led by German archeologist Hans Henning von der Osten, on Mustafa Kemal Atatürk’s request. However, the findings and results were deemed insignificant. Von der Osten suggested that Gavurkale might have been a small outpost and used for funeral purposes. Sixty-three years later, in 1993, wide-scale excavations and research conducted in the area found that Gavurkale was actually a much bigger and more complex site than previously thought.

Its ruins consist of a castle, several fortifications, a chamber built with cyclopean concretes, bases of old stone buildings and the warrior (or god/goddess) reliefs that are carved on a flattened stone wall. Gavurkale’s ruins stand at the crest of a hill that is located 2 kilometers (1.24 miles) northeast of the small village of Dereköy.

The two well-preserved reliefs of warrior figures are the main features of Gavurkale’s obscure fame. Their conical hats, swords and shoes are still perfectly intact and visible, even though the hill on which the ruins are found is quite windswept.

I was in awe of the sheer size of the rock reliefs and their state of preservation. It is a humbling experience to stand before ruins that were meticulously carved millenniums before I was born.

A much harder to find “Easter egg” among these reliefs, requiring you to look carefully as it is now quite eroded and dilapidated, is the figure of a seated person carved to the left of the warrior reliefs.

Since Gavurkale is far off the beaten path, as you may have guessed, it is inaccessible via public transport.

Gavurkale is a 50-minute drive from downtown Ankara, but unconfident drivers should not be deterred as it is a smooth trip on paved asphalt roads. It is important to note that online maps generally place Gavurkale at the center of Dereköy village, which is inaccurate. Once you reach the village of Dereköy, follow the main road as it leads you out of the village toward Karaömerli village. In three or four minutes, there will be a bend in the road where you’ll find a narrow dirt road branching off to your right. I can assure you that this dirt road is no challenge for the average vehicle. Soon, you will see the hill to your right with the immaculate Gavurkale ruins. Here, you can park your car to the side of the road.

After parking your vehicle, you will need to hike for a good 15 minutes through fields and over the hill. It is not particularly challenging or as long as it seems, but make sure you take some water with you. The fresh, cool breeze blowing toward the hill provided a great energy boost and freshened me up. I couldn't see another soul for miles around me, and it felt as if nature had reserved the area for my visit.

As I approached the hill, I couldn’t help but notice the huge stone blocks scattered across the foothill, parts of the dilapidated structures that once surrounded it. The abundance of these enormous blocks infers how prominent the site must have been during the Hittite times.

I examined the rock reliefs down to the smallest detail, with each inch capturing my interest more. Hittite stonemasonry was very advanced for its time, but still I couldn't fathom how they transformed a boulder into such a stunning piece of work.

I climbed the ancient staircase, built thousands of years ago and now blunt from years of wind erosion, to the top of the hill. Any stone touched by a Hittite artisan seems to be immune to the effects of time and disruptive forces of nature.

The top offers a picturesque view of the surrounding lands of Gavurkale. As I gazed over the plains, I saw many other boulders and sharp rocks, some of which I suspect to be ruins that have not yet been discovered or studied, reaching as far as the horizon.

As I reached the chamber room located behind the rock reliefs, I was once again blown away by the perfectly cut stone blocks. Von der Osten assumed this room was used in their funeral rites, however, research from excavations conducted in the late 20th century suggests that it had more of a ritualistic use. The path leading to the room mentioned in von der Osten’s notes is still discernible. It saddened me to see that since my last visit treasure hunters have been digging in the chamber room and one of the stone blocks covering the roof had collapsed. If protective measures are not taken soon, Gavurkale might become another in a string of ancient sites vandalized by treasure hunters.

The bases of big stone buildings are found in front of the chamber which support the theory that Gavurkale was more than a small outpost used for funerals but a complex settlement.

As I was heading back, I stopped by a water fountain on the side of the road to cool myself down with some fresh water. While washing my face, I heard a car pull over behind me. A man who must have been in his early 70s got out and saluted me, “Hello, my son!” I really do cherish the small chats I have with locals in the areas I visit as they usually have the best knowledge about the recent history of the area. This is exactly what happened with Ismail Bey, a local from the village of Dereköy, with whom I had an enlightening talk.

Gavurkale, through the eyes of a local

“My father used to tell me and my siblings back in my childhood that German officers came to dig at this place. When I was young, we were wandering around a great deal, the boys of the village. I remember so vividly that we used to climb up to Gavurkale and play games there. We had even given the warriors some names. We all know that there are many more historical ruins that are buried under this soil. It is common to find some vessels and small artifacts while plowing our fields. Recently, there have been some treasure hunters who come to the hill at night and dig the ground in hopes of finding valuable artifacts, but most leave empty-handed, thank God," Ismail Bey told me.