One day in Ankara: Exploring the citadel and witnessing its Roman, Seljuk, and Ottoman roots 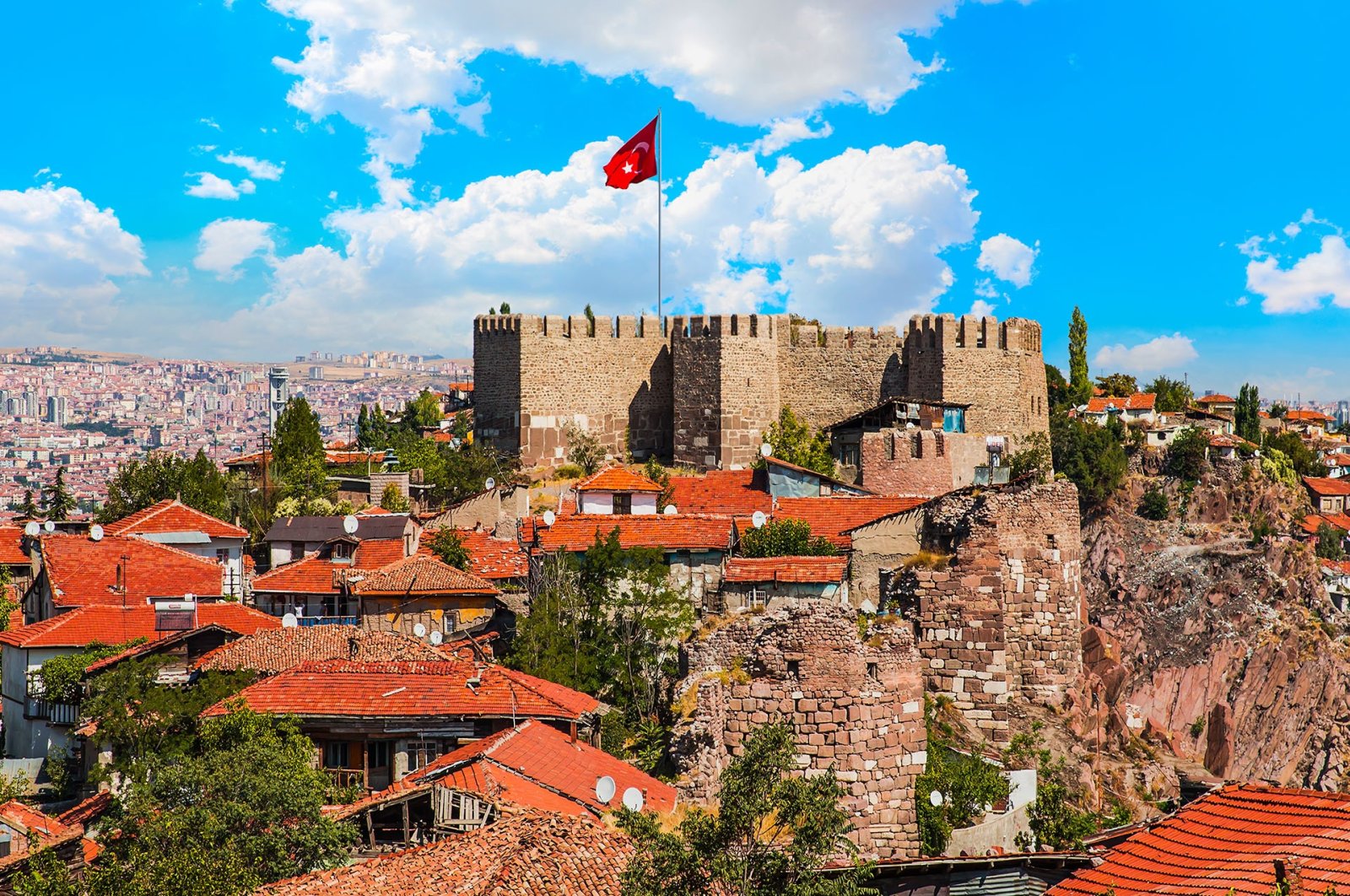 Ankara's imposing citadel can be spotted from any point in the city with a clear view. (Shutterstock Photo)
by Argun Konuk Nov 13, 2020 12:05 pm
Edited By Yasemin Nicola Sakay

Unfairly thought of as boring and dull, Turkey's capital is often cast in a negative light, especially when compared with Istanbul and other tourism hot spots. This week, we’ll be exploring the historical Ankara Citadel

The Ankara Citadel is undoubtedly the most touristic site of Turkey's capital – it's a historical area located in the central district of Altındağ that offers a wide range of things to do and places to explore.

The most prominent Turkish traveler in history, Evliya Çelebi, writes of the castle in his journals: “...on top of a high mountain stands a four-story strong white castle. The castle has 600 households. There is also an old mosque which was previously a church. The houses in the castle are very well maintained. The castle’s beauty and the fine work of engineering are worth seeing.”

So let’s explore the popular attractions and the overlooked beauties of the Ankara Citadel.

The Ankara Citadel's final form is the result of the restoration work done in 1832, which was funded and organized by Ibrahim Pasha, the son of Mehmed Ali Pasha who was the Ottoman governor of Egypt. During the restoration process, fragments of Roman sarcophagi, marble slabs with Latin inscriptions and pillar heads belonging to Roman structures found in the area were often used in the castle. Even today, it is still possible to see remnants of the Roman period embedded in the towering walls as you roam the castle grounds.

10 a.m. – Grab a bite at the nostalgic Gramofon Cafe

I arrived at the citadel early on a cool, breezy morning and decided to start my day with a light breakfast. Craving a delicious gözleme (Turkish-style stuffed flatbread), I headed to Gramofon Cafe.

Gramofon Cafe is among the most authentic cafes in Ankara. Situated on Koyunpazarı Street, one of the many narrow cobblestone alleys surrounding the citadel, it is more of a culture club than your typical cafe. Gramofon Cafe is known for its nostalgic design and vintage atmosphere, where you’ll find dozens of antique record players, old phones and gramophones.

I sat down at a table near the entrance overlooking the lively street outside and ordered a potato gözleme with a cup of fresh Turkish tea. Even though I was the first customer of the day, my food arrived in less than 10 minutes. I slowly ate my breakfast to the sound of sentimental Turkish songs that always play in the cafe. Can anyone offer a better way to start the day?

After breakfast, my initial plan was to head to the castle walls. However, the shops on Koyunpazarı Street that had been closed when I was on my way to Gramofon Cafe had opened by the time I was done with my breakfast. The vivid street is lined with small, colorful shops on either side that convinced me to spare some time and explore the area further before moving on.

The small, narrow street boasts a surprising variety of shops. I was overcome with the rich smells of the finest spices and marveled at the beautiful artisanal copper works on display at a tiny studio.

I highly suggest you take some time to look around properly, for you might find yourself tempted by the assortment of handiwork and goods at incredibly reasonable prices in comparison with the rest of the city.

12 p.m. – Take a coffee break at the historical Pilavoğlu Bazaar

Although it is a popular spot, the historical Pilavoğlu Bazaar is not very easy to find. At the start of Koyunpazarı Street, across from the Rahmi Koç Museum, a passage with a sizable, old, wooden door under the historic wooden buildings invites you. Enter this passage and you’ll find yourself in an exquisite little courtyard bazaar, home to a large number of studios run by independent local artists. It is thought that Pilavoğlu Bazaar, with the characteristics of old Ottoman architecture, was built in either the 16th or 17th century.

The walls of the passages and the terraced courtyard are used by artists to display their unique artwork. I explored the brilliant artisans' studios before having a refreshing cup of Turkish coffee at one of the art cafes.

1 p.m. – Wandering around the citadel

Now that I'd had my coffee, I was ready to properly explore the citadel and I headed to my first destination – the castle walls. It took me a 10-minute uphill walk to reach the walls, but it was certainly worth the panoramic view it offers, the best in the city. The buildings and mountains around Ankara surrounded me like a sea.

Since this is the busiest area of the castle, there are many makeshift stalls managed by local women selling handiwork and their own goods like jams, spices and dried fruits. As I was looking around, I stopped by some of these stalls and purchased bracelets and a small bag of thyme to contribute to the local businesses.

Almost every day, during peak visiting hours, the castle comes to life with shows by talented buskers performing traditional Turkish songs. The circular hall within the castle has great acoustics, making me feel as though I was listening to a concert in an amphitheater.

2 p.m. – Pay a short visit to the Mosque of Sultan Alaaddin

Near the main city walls, there is an old mosque with simple but authentic Islamic architecture. The Mosque of Sultan Alaaddin was built in 1187 AD by Seljuk statesperson Muhiddin Mesut Shah. Throughout the centuries, it has been restored many times, and in some cases, fragments from the surrounding ancient Roman sites were used. This 800-year-old-mosque is still an active religious complex.

Rahmi Koç Museum, a museum of technology and industry, was built in 2005 by the prominent Koç family, which hails from Ankara. It is made up of two historical structures: Safrahan, a 16th-century caravanserai, and Çengelhan, an old inn built in Suleiman the Magnificent’s era. The museum collection consists of more than 4,000 objects, giving insight into Turkish and global industrial history. The museum's dozens of galleries boast a broad range of collections of marine technologies, products and methods used in pharmaceutical and medicinal industries, agricultural machines, aviation equipment, old transportation vehicles, rail transportation items, toys, and instruments for communication, science and maritime navigation, among other things.

There are also exhibitions on Atatürk and Vehbi Koç, the founding father of the Koç family, who was one of the first major industrialists and businesspeople in Turkey. You’ll also find a nice cafe where you can take a break and taste delicious specialties. The entrance fee for the Rahmi Koç Museum is TL 15 (about $2) for adults and TL 10 for students. The museum is open Tuesday to Sunday from 11 a.m. to 5 p.m.

Erimtan Archaeology and Arts Museum was founded by Turkish businessperson Yüksel Erimtan. In 2015, three historic houses near the Ankara Citadel were restored and turned into the museum, where many artifacts from Erimtan’s personal collection of Hittite, Urartian, Roman and Byzantine history are now displayed in contemporary ways. The entrance fee is TL 12 for adults and TL 7 for students. Visiting hours are the same as for the Rahmi Koç Museum.

4 p.m. – End the day at the Anatolian Civilizations Museum

Without a doubt, the Anatolian Civilizations Museum is the most exquisite museum in Ankara. The museum consists of two historical structures dating back to the 15th-century Ottoman era: the Mahmutpaşa Covered Bazaar and the Kurşunlu Bazaar, both of which today boast a vast collection of artifacts from various civilizations unearthed in Anatolia.

Having received the award for “Museum of the year in Europe” in 1997, the Anatolian Civilizations Museum is not to be missed.