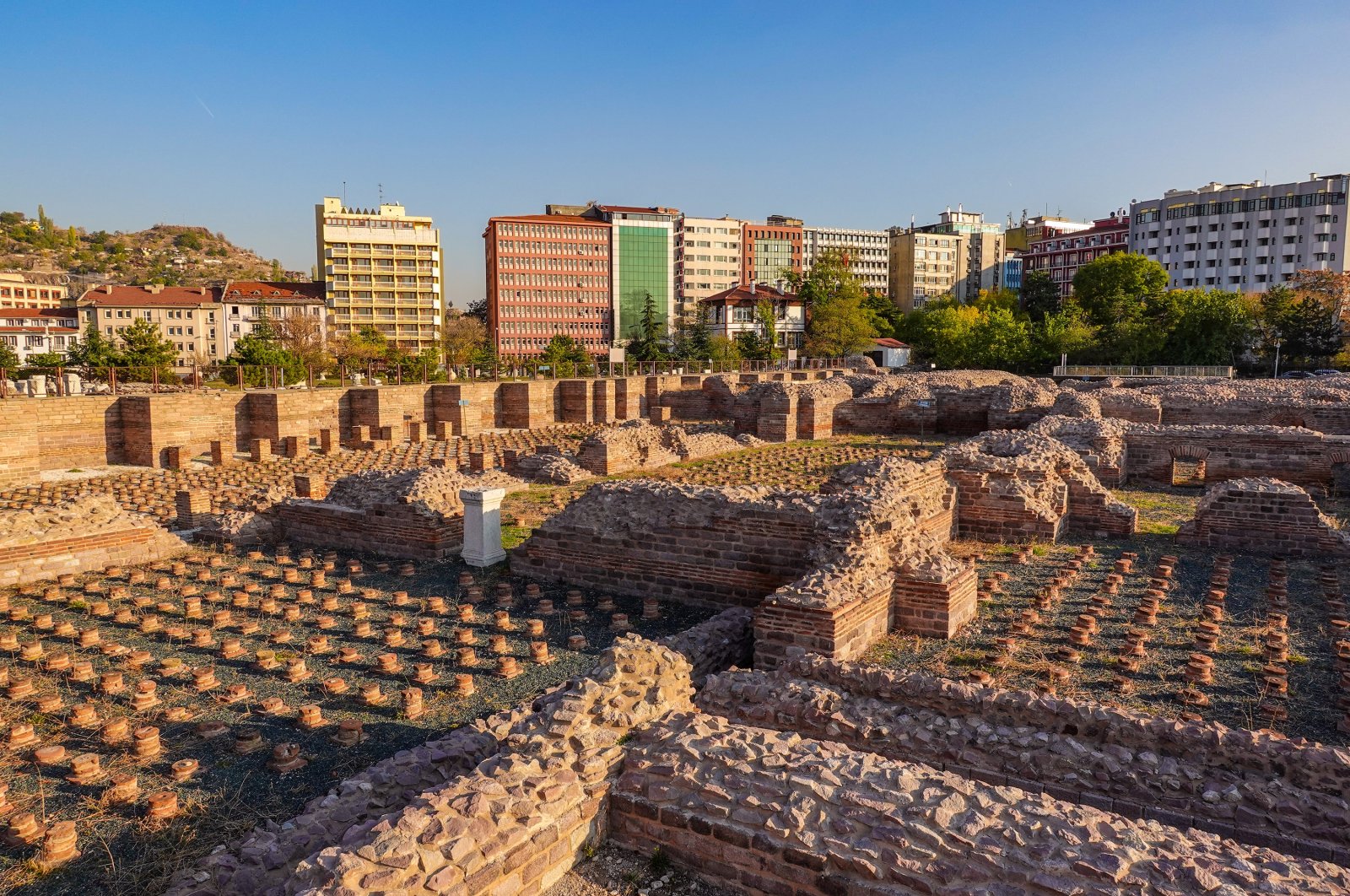 Unfairly thought of as boring and dull, Turkey's capital is often cast in a negative light, especially when compared with Istanbul and other tourism hot spots. This week, I’ll be outlining a short-ish gastro-history tour in the central neighborhood of Ulus

Ulus has always been fascinating to me. With its bustling streets, historical sites, authentic restaurants, bazaars and stylish buildings, the colorful neighborhood certainly has its own unique character.

It is the very spot where the first Turkish Parliament was founded as the country's decision-making body during the Turkish Independence War and where the foundations of the Republic of Turkey were ultimately set.

Today, Ulus offers a broad range of attractions despite being spread over a small area, which is good news because you won't need more than half a day to tour the locale. This week, I will be proving to you how easy it is to fit Ulus into your busy Turkey itinerary.

So, without further ado, let’s start exploring Ulus together!

The COVID-19 pandemic has acted as a rather serendipitous opportunity for travelers. Open-air atmospheres with little crowds, just me and the remains of the ancient peoples. What else could I ask for? I arrived at the Roman Baths shortly after they opened on a weekday, and being the only person there, I was excited at the prospect of having the site all to myself for a good 1.5 hours.

The Roman Baths of Ankara, built in the third century A.D., is another example of the well-preserved structures that were built honoring the Greco-Roman God of Medicine, Asclepius. Constructed during the rule of Roman Emperor Caracalla, son of Septimius Severus and situated on a vast area abutting historic Çankırı street, the ruins of the bath stand as an important reminder of the era of Roman rule in Ankara.

It is intriguing how the Roman baths were notably advanced structures, despite being built thousands of years ago. Even more intriguing, and somewhat of a surprise, was that the large bath structure was built to include a Frigidarium (cold room), a Piscina (swimming pool), an Apodyterium (changing rooms), a Tepidarium (warm room) and a Calidarium (hot room). I chuckled with an empathetic understanding when I learned that the Romans had built much larger hot sections in comparison to the rest due to Ankara’s particularly challenging winters. An efficient pipe system easily transmitted hot air to every corner of the bath. It’s hard not to admire such ingenuity.

There are also hundreds of stone works including gravel steles, epitaphs, lion statues and sarcophagi on display in the open-air area around the bath structure. I spent more time examining the sculptures than investigating the actual bath, as I stumbled upon many that were beyond what I had anticipated. The stone works, mostly covered with vegetation now, paint a comprehensive picture of the different cultures and peoples that have inhabited Ankara. I was pleasantly surprised to see old tombstones with inscriptions in Ottoman Turkish, Hebrew and Armenian. I did not expect to see such a wide range of artifacts at an ancient Roman site.

Regular readers of this column will recall my previous trip to Ankara’s mysterious Zir Valley and the old village of Stanoz. I had described witnessing the appalling condition of the Armenian cemetery and the irreversible damage done to it by local treasure hunters digging up graves to find valuable goods. To my delight and relief, I discovered that over a dozen of the Armenian tombstones had, in fact, been transported to the Roman Bath open-air museum for protection alongside those from other time periods. The juxtaposed amalgam of gravestones of various origins adds a unique perspective to the atmosphere of the open-air museum.

After a productive yet tiring walk around the Roman Baths, I set out to have lunch at one of the most famous meatball joints in the city. Following an eight-minute walk northward, I found myself at Üstünel Meatball Shop.

It was a fantastic lunch. As the name suggests, Üstünel Meatball Shop only serves one dish – grilled meatballs. The presentation of the food was unique. As soon as you are seated, you are served a heaping pile of fresh vegetables including cherry tomatoes, roasted garlic heads, lettuce, parsley, red onion and arugula leaves as a side, followed by the freshly grilled meatballs, which assuredly will fill you up for the rest of the day. Even though it is almost winter, the summer vegetables I was served were fresh, juicy and delicious. This place is highly recommended.

A meal is not complete without something to satisfy my sweet tooth, which in this case was some Cyprus dessert (a light milky dessert topped with cream, coconut flakes and walnut crumbs) with a cup of Turkish tea.

My visit to the museum filled me with admiration and a sense of pride. There is nothing inherently special about the building, but the realization that the fate of the Republic of Turkey was sealed under this roof by a group of patriots led by Atatürk who founded a country from the ashes of the Ottoman Empire was a special feeling.

The museum collection includes some of Atatürk’s personal belongings, equipment used in wars, documents of the Teşkilat-ı Esasiye Law (the first constitution of modern Turkey), telephones and telegraphs used during the war and oil paintings.

Standing in the yard of the Governor’s Office, you will find the Column of Julian, a 15-meter-high column that was erected in honor of the Roman Emperor Julian’s visit to Ankara in 362 A.D. There are also stone fragments of old Roman structures scattered around the yard. During excavations in 2007, an ancient Roman street was discovered, which was the main path connecting the Roman Bath to the Temple of Augustus. Parts of the street can be seen under a glass deck in the yard.

You will also definitely not want to miss the huge stork that nests on top of the column.

The Temple of Augustus is the easiest reminder of the Roman era in Ankara. Constructed on top of an ancient Phrygian temple dedicated to the Phrygian Goddess Kybele (Mother of Gods) and the God Men (Lunar Moon), the Temple of Augustus was built during the rule of the first Roman Emperor Augustus.

The temple is unique due to its epigraph, titled "Res Gestae Divi Augusti" ("Augustus’ Deeds") and also known as "Monumentum Ancyranum", written in Latin and ancient Greek about the life and achievements of Emperor Augustus, found engraved on the walls of the temple. The epigraph is the best preserved of dozens erected throughout the Roman Empire.

The temple is surrounded by a fence for its protection, so it is not possible to see closely. Since the temple is located outdoors and integrated with the Hacı Bayram Mosque complex, it can be visited 24/7, free of charge.

The Hacı Bayram Veli Mosque complex, dating back to the first half of the 15th century, is perhaps the most sacred and respected religious site in Ankara.

The mosque is currently closed due to the restrictions enforced on account of the COVID-19 pandemic and therefore, not open to visitors or congregations. However, once it has opened its doors again, you can explore the wonderful china works rendered in the traditional Kütahya style on its walls and marvel at the mosque's facade.

This mosque was dedicated to Hacı Bayram Veli, a 15th-century Sufi poet and a reputable personality in Sufi Islam.

Before I departed, I decided to finish my day with a cup of Turkish coffee at the most popular and stylish coffee shop in the Hacı Bayram complex: Tahayyül Kemankeş. Atop a hill that partially oversees the Ankara Citadel and its ancient fortifications, I sipped my coffee with the serene, historic view making it taste that much better.