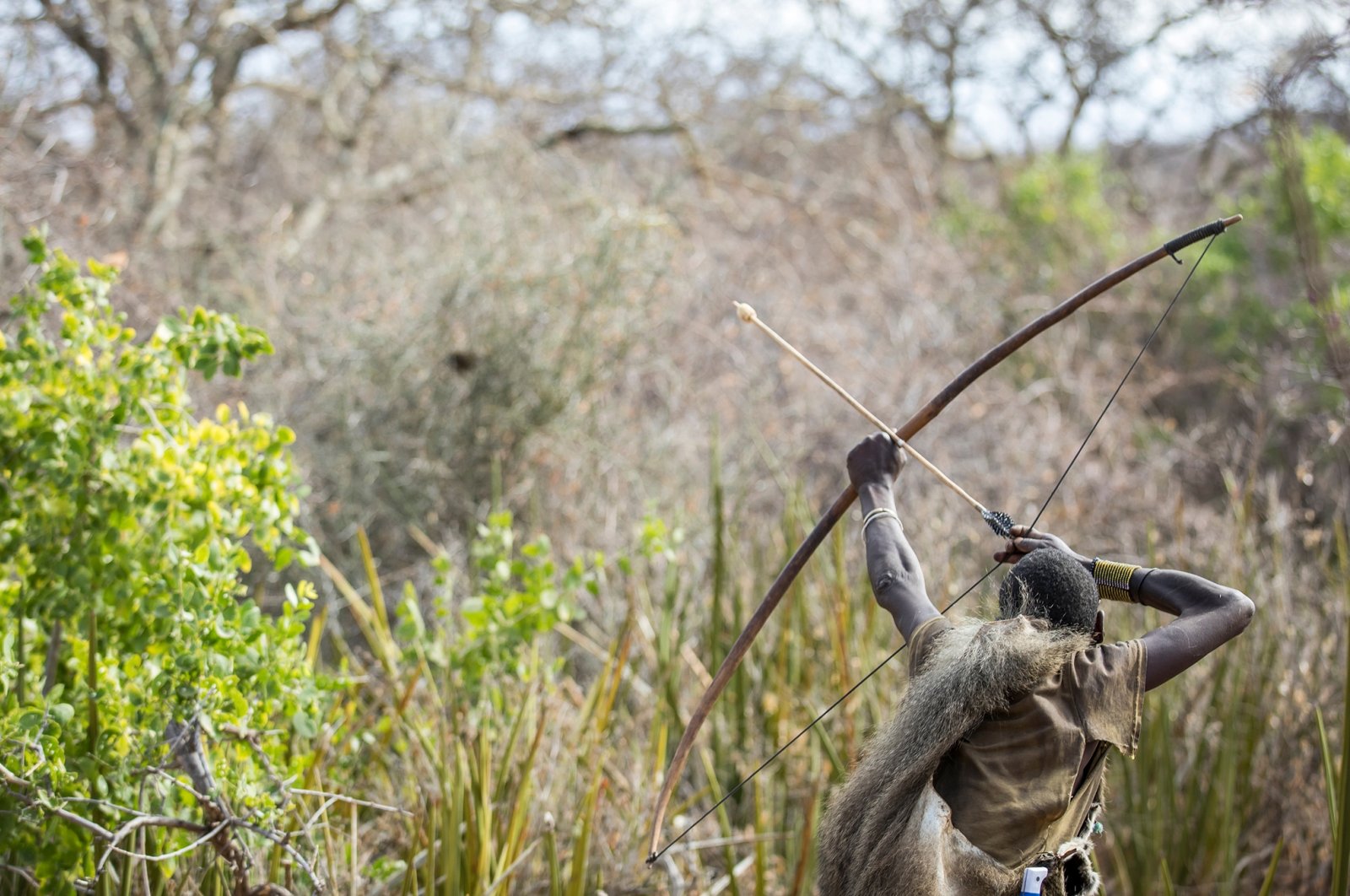 A Hadza hunter draws his bow as he prepares to shoot an arrow in northern Tanzania. (Shutterstock Photo)
by Anadolu Agency Aug 18, 2021 11:31 am
RECOMMENDED

In the forests of Yaeda Valley and the landscape surrounding Lake Eyasi in north-central Tanzania, it is possible to hear the whistle of arrows parting the air in search of a target, offering an exciting experience for tourists. These are the lands upon which the hunter-gatherer people of Hadza, or Hadzabe, have settled.

Numbering approximately 1,300, anthropologists believe that they represent a modern link to ways of human existence and survival.

The tourists, who enlist for the trip to undertake a cultural journey, learn hunting techniques and survival skills from the tribe, said Ezekiel Phillipo, a leader of the Hadza community.

By lighting a fire by rubbing a wooden stick between their palms against a small hole gouged on a piece of log, the tourists can grasp the ancient technique of igniting the fire.

Jennifer Brown, a tourist who has flown from Michigan in the United States to spend time with the tribe, expressed her appreciation of their lifestyle.

"It is a fantastic experience. It baffles my mind how these people manage to survive with very little resources,” she said.

She had joined Hadza women singing and dancing on a moonlit night. She recalls that men dressed in feathered headdresses and bells around their ankles stomped their right feet in time with the music.

Luka Kikwa, a 30-year-old tribal leader, said the visitors shared dinner with his family, which includes hunted animals and edible plants. The tribe eats everything they can kill, from birds to wild pigs, buffalos to baboons.

According to Phillipo, they smear poison on their arrow tips made of the boiled sap of the desert rose, which are powerful enough to kill a big animal. Tourists spend nights in temporary thatched shacks made of dried grass and tree branches, the traditional abode of the tribes.

Kikwa in his home has just a cooking pot, water container and an ax which he often carries on his shoulder.

While there is little hunting ground now left due to encroachment, of late the tribal elders with the help of the Tanzanian government have switched to earning a living by promoting cultural tourism, where they demonstrate their unique skills to visitors.

Adventure tourists drive through the rift valley, up the cliff over the Mbulu plateau, and venture to the banks of serene Eyasi Lake to camp in Yaeda Valley.

The visitors say that the traditional and unchanged way of life is exciting for them.

Phillipo, said the visitors along with tribe members collect tubers, berries and other wild fruit along with honey, depending on the season.

Tourists say walking through the forest is challenging as it is packed with spiked acacia trees and thorny bushes.

"For us, every day is a struggle. We have to find something for the family to eat,” said Kikwa.

Kikwa, who is married and has three children, has scars on his chest and arms as marks of his struggle with bushes, snakebites, arrows and knives.

He, however, opposes the idea of switching to a modern lifestyle.

"We cannot survive without hunting,” he said.

While some Hadza families have started sending their children to school, many of them drop out or escape from classrooms to return to the forest.