Termessos: The city Alexander the Great failed to conquer 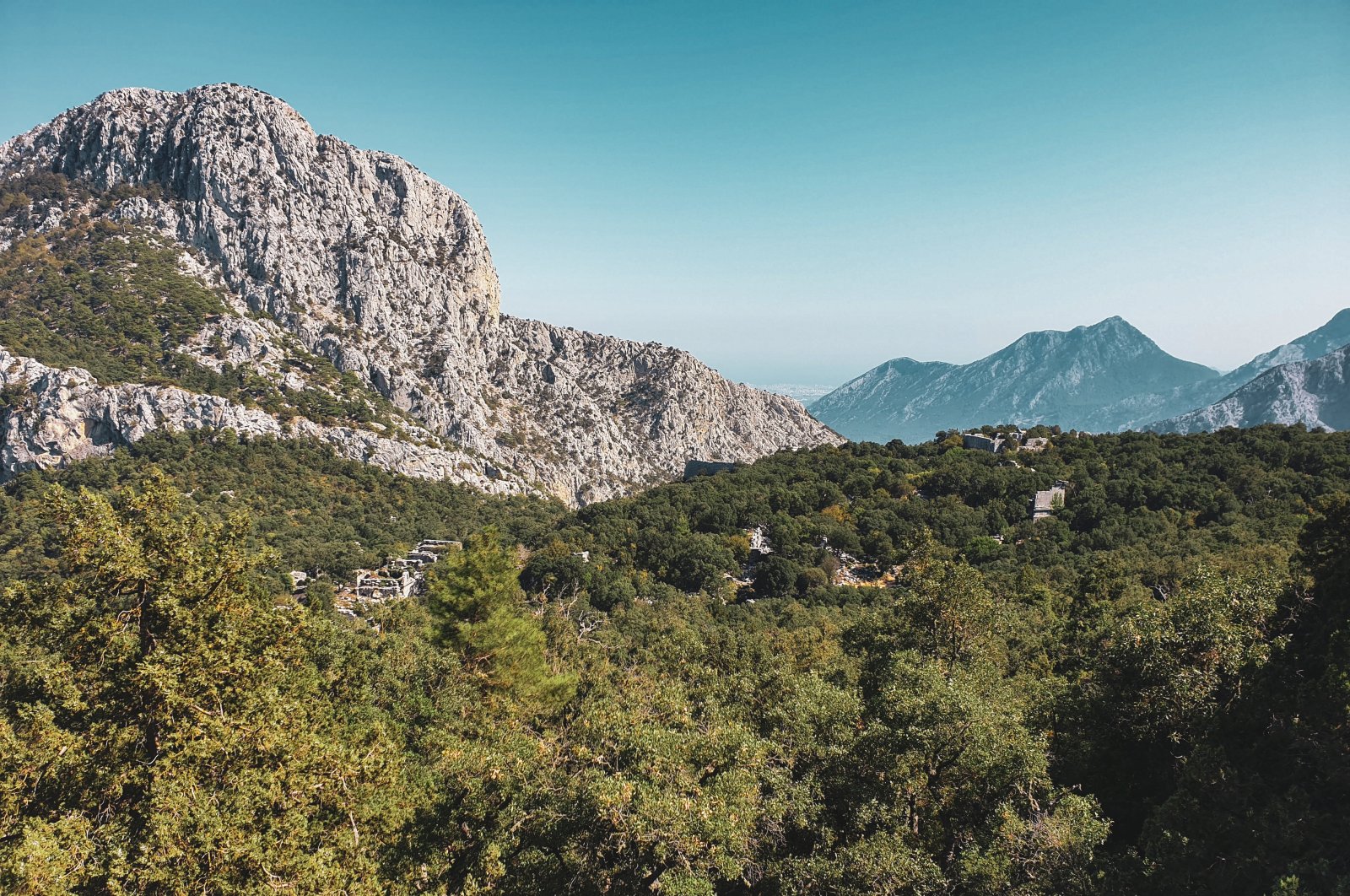 Though mostly in ruins, the ancient city of Termessos is still spectacular and now surrounded by a sea of green. (Photo by Argun Konuk)
by Argun Konuk Aug 14, 2020 12:50 pm

This week we're going to discover an overlooked oasis of history in Antalya on Turkey's southern coast, Termessos – an ancient city so high up in the mountains that even Alexander the Great failed to conquer it

Termessos is a mountain-top ancient city built 1,000 meters (3,280 feet) above sea level. Today, it is part of Mount Güllük-Termessos National Park. Concealed by a dense forest and steep mountains, Termessos had always been protected from invasions, sieges and other human threats; its unique location served the city well as a natural shield throughout the centuries.

Currently included on UNESCO’s Tentative Sites List, Termessos is one of the most well-preserved and breathtaking sites in Turkey's southern Antalya province.

Termessos is primarily known as the city that could not be conquered by the Macedonian emperor and warlord, Alexander the Great. Unfortunately, aside from the journals kept during Alexander the Great’s military campaign in Asia Minor and a few surviving records from the Roman Empire era, there are few documents that could illuminate the history of Termessos. It is still unknown when and by whom Termessos was founded.

The city was first mentioned in history during Alexander the Great’s siege. Here are a few known facts about the city:

– Despite the fact that Termessos was a part of the Roman Empire, it had always been an autonomous city due to its remoteness.

– In 71 B.C, the Roman Senate unanimously voted for an act allowing Termessos to be autonomous and make its own laws.

– The inhabitants of Termessos called themselves the Solym people, descending from the Pamphylian Greeks.

– A severe earthquake hit the city at a yet-undetermined date, destroying the aqueducts and cutting off the main water supply. Subsequently, the Solyms abandoned the city.

We embarked on the 45-minute drive from Kaleici, in downtown Antalya, to Termessos. Along the way, I took in the picturesque natural scenery and ancient ruins covered with heavy vegetation on the roadside. After turning off the main road, we drove on a steep and narrow road for 9 kilometers (5.6 miles), which leads straight to Termessos’ parking lot. This narrow asphalt road is in good condition; however, it is advised that you drive carefully. The route also offers marvelous views of the Taurus Mountains from small pull-over spots on the cliff side of the road.

You will need at least two hours to complete your visit, and there are no shops near Termessos, so make sure you bring plenty of water and snacks.

The steep path starting from the parking lot to the entrance of Termessos is challenging to climb. Wearing comfortable shoes suitable for trekking would make your climb less tiresome and save you from painful blisters.

After parking the car, I started the 20-minute climb to the entrance of Termessos. The first notable ruins I saw were the lower city walls, which had been the prime fortifications that once surrounded the city. It was quite surprising to see that the cut stone blocks of the walls are still quite intact. After seeing these, I knew there must be a glorious city awaiting my arrival at the end of the hiking path.

At the end of the path, on the left side, I was welcomed by what was once the bath and gymnasium of Termessos, with many surviving arches and standing walls. Unlike many visitors who head straight to the main trail leading to the center of Termessos, I took the dirt road curving left after the bath ruins. In fact, this area is the most well-preserved part of the city and used to be home to the old state buildings, now wrapped in green ivy. Wandering there, I felt like I was on the set of an Indiana Jones movie.

The colonnaded street area was the most bustling spot in the city, where most of the economic affairs and political activities took place. Sadly, except for a few artifacts, not much has survived here. The ground is littered with countless marble slabs, stones and fragments with legible ancient texts and carvings on them. As I was exploring the ruins of the colonnaded street further, it caught my attention that the old drainage and sewage system that was built centuries ago was still intact. As a matter of fact, a faint stream was flowing through the ancient pipes. The only plausible explanation I could come up regarding the source of the water is that it must come from the mountains.

The only standing structure on the colonnaded street was marked as “Unidentified Structure,” as archeologists have not been able to identify its purpose.

Undoubtedly, the theater is the most notable and remarkable attraction of Termessos. Located atop a hill near a steep cliff on the eastern borders of the city, this archeological wonder could seat up to 4,500 people. The theater offers a breathtaking view of the Taurus Mountains. Except for a few rows of seats, most of the theater has survived. I was simply left in awe of the unique scenery the theater offers. However, for me, the greatest surprise was to roam around the spacious rooms with huge arch doors and windows on the lower right part of the stage.

Alcetas was a prominent Macedonian warlord who was mentioned among Alexander the Great’s influential generals. After Alexander’s death, Alcetas was challenged by Antigonus, one of Alexander’s commanders. The war between the two warlords took place in the region of Psidia and resulted in Alcetas’ resounding defeat. Alcetas sought refuge in Termessos, and the residents of the city provided protection to him. In subsequent months, in order to protect the city from danger, the elders of Termessos wanted to hand Alcetas over to Antigonus, who had set his military camp at the foot of the mountain. Alcetas did not want to face a gruesome death, so he took his own life. To this day, his grave lies on a rock wall in the highlands of Termessos.

The grave is a 15-minute trek from the colonnaded street of Termessos. It is a pleasant hike, not a cumbersome one. The first thing I noticed upon reaching the site was the large rock carving of Alcetas on a horse on the wall above the grave. It surprised me greatly to see that this rock carving survived despite harsh natural elements, such as the scorching heat and interminable humidity.

The northern necropolis is the real hidden gem of Termessos. Almost all visitors leave Termessos without paying a visit to the vast necropolis. I got to know this place by pure luck after one of the guards suggested I visit it. The necropolis actually abuts the parking lot, however, it is not visible due to the thick vegetation that keeps it hidden.

In the necropolis, there are dozens of sarcophagi with meticulous carvings and ancient inscriptions on them. Many of the tombs and sarcophagi are unbelievably intact.

One noteworthy spot to see here is the grave with lion figures, a monumental tomb with stone slabs engraved with figures of lions. Exploring the hidden graves scattered among the ancient sarcophagi is a surreal experience. I couldn’t stop wondering how many more sites were buried under the soil and hidden by vegetation awaiting to be unearthed around Termessos.

If you happen to be in Antalya, make sure you add Termessos to your bucket list. It is truly an unforgettable experience to explore these ancient ruins nestled in the forested mountain and walk along roads that were strolled thousands of years ago by the Solym people.