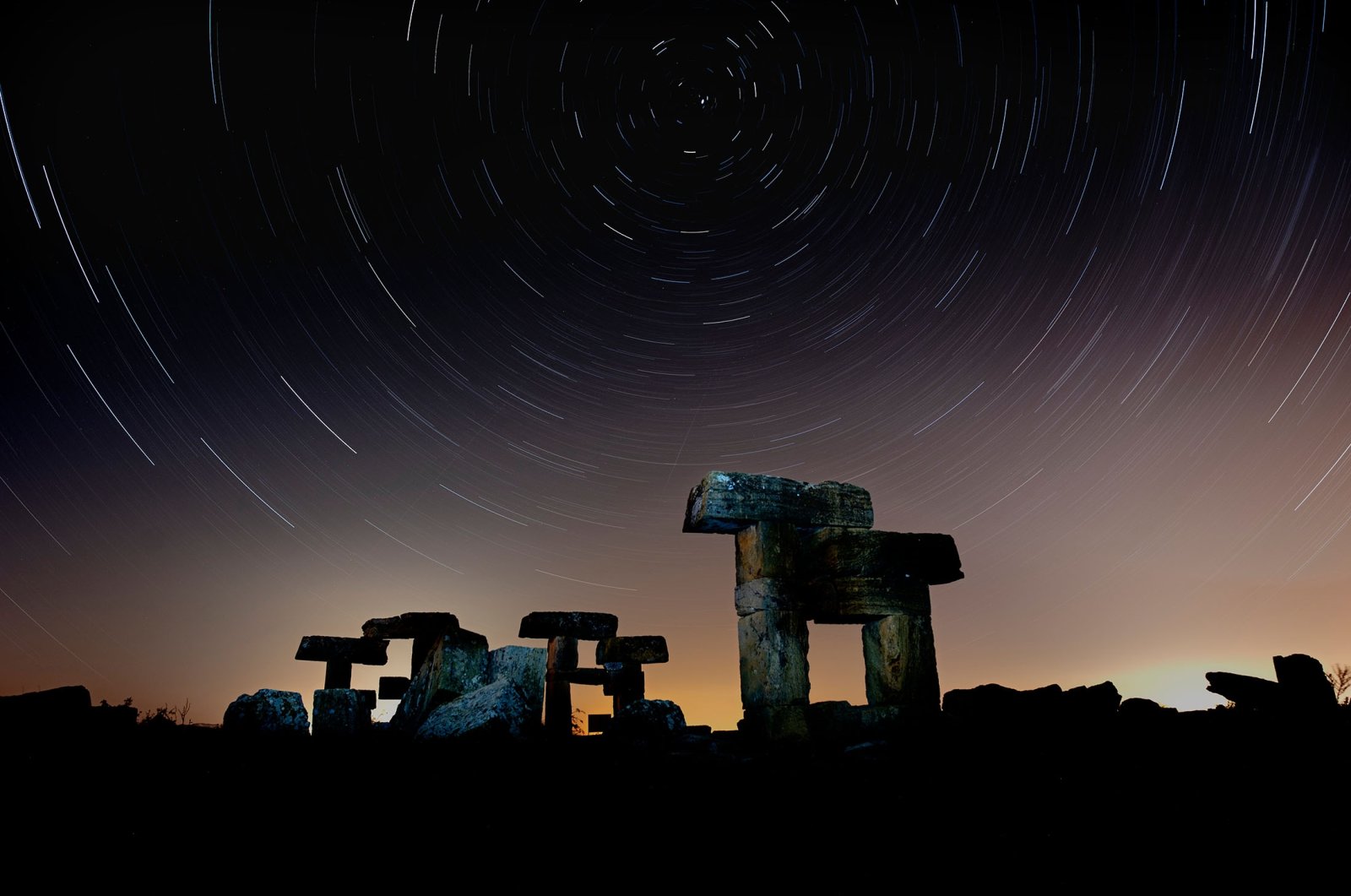 A view of the starry night sky over the ruins of the ancient city of Blaundus in the Ulubey district of Uşak, western Turkey. (Shutterstock Photo)
by Argun Konuk Mar 26, 2021 12:35 pm

This week, our COVID-19-safe travels take us to a largely undiscovered gem in the midlands of Turkey's Aegean region: the ancient city of Blaundus

Located within the borders of the western Anatolian city of Uşak, the ancient city of Blaundus (or Blaundos as known by some) presents breathtakingly beautiful ruins, of which the most special are perhaps a series of stone blocks which were once a state building that have earned the nickname the "Stonehenge of Anatolia."

Blaundus was established by the Macedonians, who stayed in Anatolia after Alexander the Great’s military campaign in the area in the third century B.C. The city's Macedonian inhabitants used to even call themselves the “Macedonians of Blaundus.” However not long after Alexander the Great’s reign, Blaundus became part of the Kingdom of Pergamon, and later, was occupied by the Romans. The city experienced its golden age in the Roman era.

The city of Blaundus, a 40-minute drive from Uşak, is built on a vast plain surrounded by deep valleys and canyons which resembles a peninsula. A temple, theater, stadium, graves made of rock, a colonnaded street and well-preserved city walls are the most notable sites this often-overlooked ancient city boasts.

Story of its discovery

In 1834, British traveler and antiquarian Francis Vyvyan Jago Arundell visited the area. Upon examining the coins found around Blaundus, Arundell assumed he had found the ancient city of Klannudda (or Alaudda), which actually stands in the northwest direction of Blaundus.

This inaccurate assumption was changed when the British geologist William John Hamilton uncovered inscriptions on a slab that said “Blaundeon Makedonon” in 1845 making it clear that what Arundell had thought to be Klannudda was the ancient Macedonian city of Blaundus.

German researcher K. Buresch, who visited Blaundus in 1894, reported that Ottoman officers had used a considerable portion of the ruins of Blaundus to construct military barracks in one of the surrounding villages.

When heading towards the city, a couple of hundred meters before the parking lot and the city entrance, there are two notable sites that you must stop to see. It is not possible to miss them given the big signboards on the sides of the road.

This structure dates back to the second half of the first century A.D.: the tomb of one of the important figures of Blaundus. The ruins of the tomb are quite dilapidated and covered with vegetation. However, it is still possible to see ornaments and ornate rock carvings on broken pieces.

A couple of meters after the monumental tomb, on the right side of the road, there is a large arch. Behind the arch what remains of the long aqueducts that once provided water to Blaundus can be seen.

The ancient city's theater was built on the side of the cliff, however, it is not possible to go all the way down the cliff to actually see it. You may be able to catch a glimpse of its remains by peering over the edge of the cliff-top.

The first two things that welcome you upon parking your car are the huge city wall and the big gate that once served as the main city entrance. The fact that such high walls have managed to survive the centuries and harsh winds of the high plateau where Blaundus stands took us by surprise.

The surviving remains of the colonnaded street indicate that the city center was well-planned and constructed in a grid pattern. Only a few columns of the doric portico on both sides of the street have survived.

A couple of steps before the colonnaded street, on the right side of the trail, you can see the ruins of a huge temple, the Demeter Temple, also called the temple of Ceres by the Romans. The dilapidated blocks and remnants of the temple are scattered around. It is possible to see an array of rock carvings, patterns and ornaments on the dilapidated pieces of the temple building.

The temple's marble floor is quite well-preserved. In fact, the marble slabs are still relatively smooth and glossy. If you look carefully while roaming the temple, you can still come across rocks with the name Ceres written on them.

The stadium was built on the northern cliff of the city but unfortunately, besides a few rows of seating, not much else has survived the centuries.

Once you reach the remains of the state building, with the main gate behind you, walk left towards the edge of the cliff. From this vantage point, you will be able to make out the rock grave rooms at the bottom of the valley.

During the excavations, archeologists found dozens of rock grave rooms with well-preserved paintings of animals and plants in a variety of colors on the walls.

Unfortunately, going down to the rock graves is almost impossible as the cliff is very steep and the ground is not that firm. What you can do is simply enjoy the view from the top of the plateau where the city is located. Or, you might as well zoom in with your phone camera which can serve as a makeshift pair of binoculars.

The ancient city of Blaundus is free to visit and also offers free parking. Since there is no security, there are no specified visiting hours. You can visit it anytime, which we confirmed by calling the Uşak Municipality, although, a signboard in front of the city entrance says that you can not visit the site after 7 p.m.

There is no public transportation to the site and you will have to make your way there with your own vehicle.

Since there are no shops nearby, make sure you bring some water and maybe a snack.