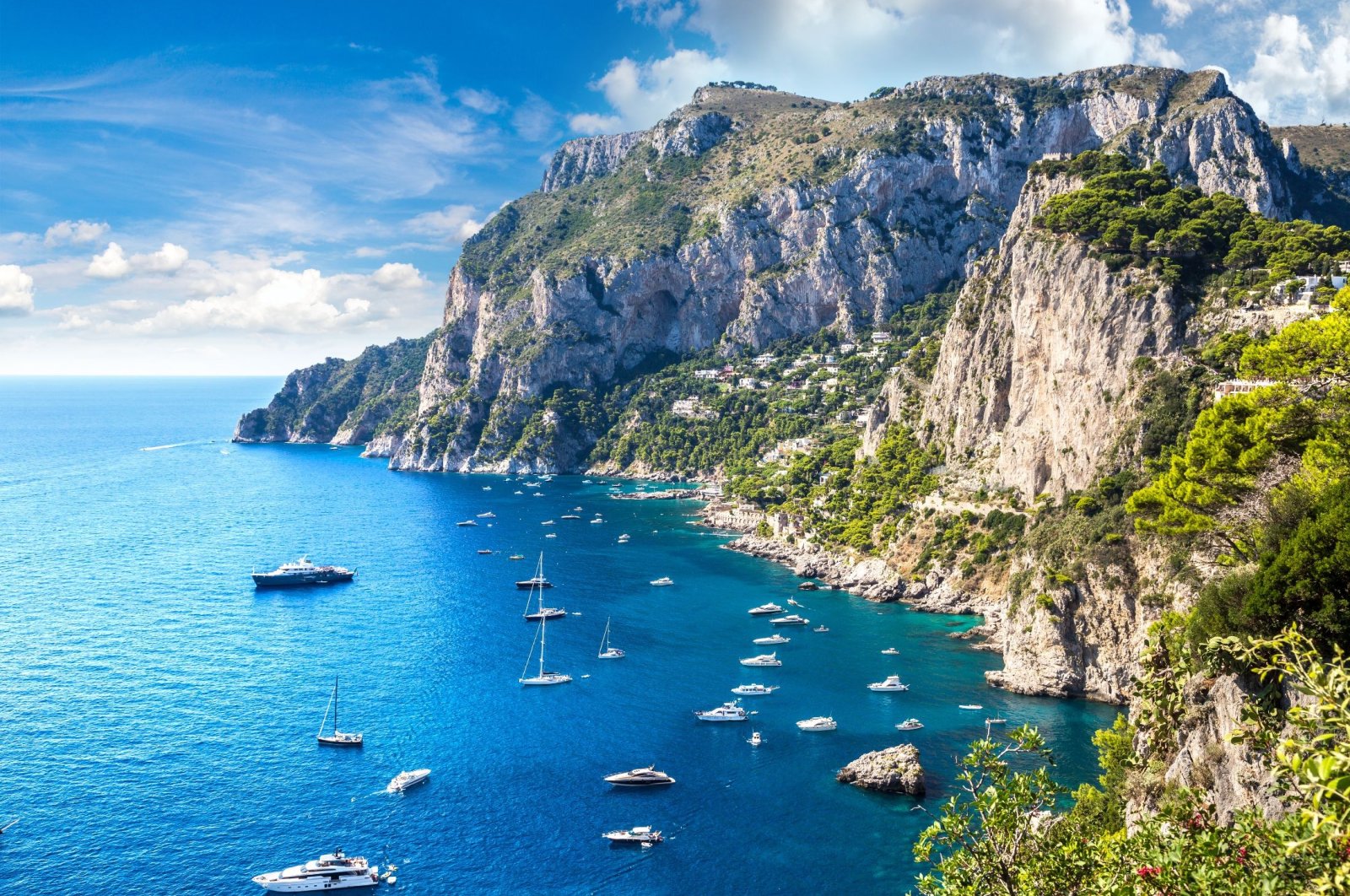 A group of boats float off the shore of the island of Capri, Italy. (Shutterstock Photo)
by German Press Agency - DPA Jun 14, 2021 11:06 am
RECOMMENDED

Since the start of the COVID-19 pandemic, the days have been quiet and peaceful on the usually overcrowded island of Capri in Italy’s Bay of Naples. Now, visitors can take advantage of all the island has to offer, including hiking opportunities, incredible scenery and historic sites "COVID-free," as an informative banner promises arrivals on the ferry.

For this message to ring true, all 14,000 inhabitants of the island had to get vaccinated against COVID-19 before the beginning of the summer season.

Some holiday regions, such as the Amalfi Coast nearby, were outraged at this: An example of more privileges for the island of the rich and beautiful.

For more than a century, Capri has attracted writers, actors, business magnates and political leaders.

This summer, the famous are sure to return, although it could be quieter than in the summers before the pandemic.

Most residents don't want a return to "overtourism," when most of the visitors were daytrippers trying to see the most important sights in a few hours.

A dream for hikers

If you want to catch the magic of Capri, you should stay a few days and walk across the island. You'll quickly leave the bustle behind you and understand why so many people don't want to leave.

"During the evenings it gets quiet," says Cecilia Walch. A 54-year-old woman who has lived half her life on the island.

When she was 12, she visited Pompeii alone, and at 23 decided to stay on in Capri. "I don't regret it one second," she says as she leads a tour onto a bus heading to the island's southwest.

By the cape of Punta Carena, there is a path that you won't find in most hiking guides, the Sentiere dei Fortini, leading from the red lighthouse along the whole western coast to the Punta dell'Arcera.

Walch usually comes here with her husband and her dog, especially when it is stormy, with the sea spray splashing on the pale, rough cliffs. "In spring, everything is blooming in orange and yellow," says Walch. "It makes you dizzy."

Steep steps periodically lead down to fjord-like bays in which the locals like to bathe. Even in the summer, it's pleasantly shady here, with a nice breeze.

With a few stops to jump in the water, the so-called path of the forts can easily become a day trip. The forts that give the path its name were built by the British at the beginning of the 19th century, and their ruins still sit atop the cliffs.

The villas of the emperor

Back in the day, workers carried blocks of chalk along the path, which people used to whitewash their homes or make mortar. Marble was especially good for this, which is why people even burned the columns and statues of Emperor Tiberius' palaces.

The emperor built 12 villas on the island. One of them was probably where the Swedish neurologist and writer Axel Munthe built his own dream house at the end of the 19th century.

Munthe was obsessed with Tiberius, and his Villa San Michele is full of real and fake antiquities.

Before the pandemic, tour groups squeezed past the statues and busts to the terrace, but now you can stand in beautiful silence next to a sphinx, looking down at the turquoise water and port.

A view of Capri's landmark

The second tour begins in the morning from the Piazza Umberto I, south along the Via Vittorio Emanuele.

The alleys and arcades are as narrow as those in a bazaar. Only a few people are on the Via Tragara.

In the shade of pines and palm trees, you'll walk past villas hidden behind iron gates and tall stone walls.

It is actually too early for a break, but who could resist a stop at the panoramic terrace of Punta Tragara?

The view of the steep coastal landscape and the three Faraglioni cliffs, Capri's landmark, have attracted the likes of Eisenhower and Churchill to the nearby hotel.

This is where possibly the most beautiful path of the island begins, the Via Pizzolungo.

You wander along a comfortably fortified path lined by pine forests and great oaks, with a view of the cliffs and steep, overgrown slopes.

An eyecatcher along the path is a red villa, sitting like a temple atop a small cliff. On its roof terrace, its builder, Curzio Malaparte, used to do his morning exercise.

The journalist and dandy said about his house, which is not open to the public: "A house like me: sad, hard, serious."

From the Matrimonio grotto with its ruins of walls, the path continues along to the Arco Naturale, a natural rock arc framing the glittering sea. The smell of pines is in the air, and you can hear the waves crashing.

Once more it becomes clear why so many Brits, Germans, Russians and Americans have fallen in love with Capri and stayed.

Especially in the 1960s, many rich people built villas on the island, often without official authorization, Walch says.

Their progenitor was Emperor Tiberius, after whom a road is named leading through fruit orchards to the largest and most spectacular of his 12 palaces on Capri.

The Villa Jovis, as it is known today, oversees a clifftop at a height of 300 meters. For 11 years, Tiberius led the empire from here, transmitting messages via a huge lighthouse to Punta Campanella on the mainland.

After his death, the Caprese ransacked the palace and used it as a stone quarry, but the ruins are still impressive today, with their broken archways indicating how high the ceilings used to be.

And the view across the island to Monte Solaro is definitely worthy of an emperor.