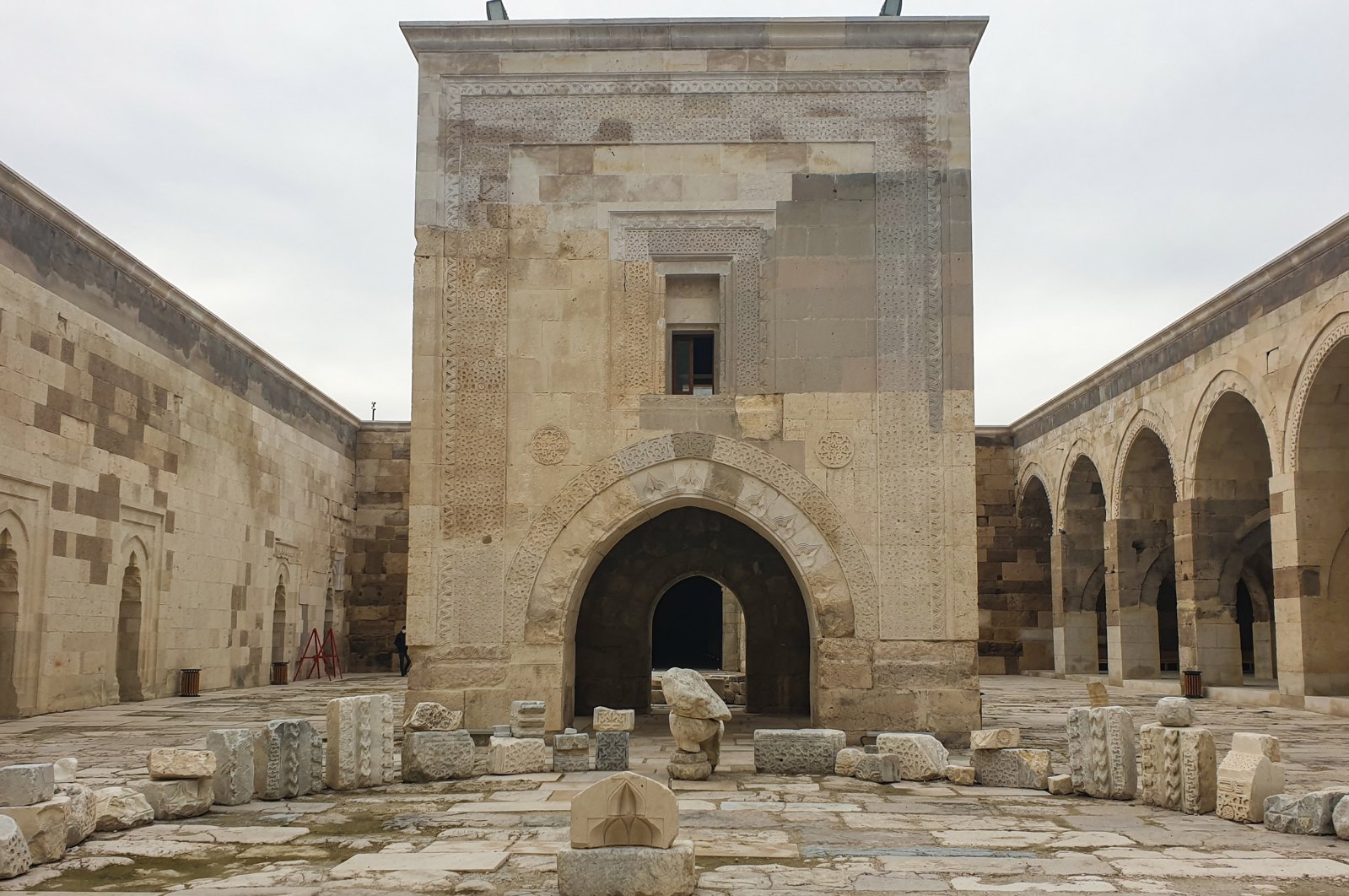 The masjid at the open-air hall of the Sultanhan Caravanserai. (Photo by Argun Konuk)
by Argun Konuk Jan 08, 2021 11:25 am
Edited By Yasemin Nicola Sakay

In this five-part mini-series about the central Anatolian town of Aksaray, we'll start by exploring the caravanserais, mosques, museums, bathhouses and madrassas and get to know a very unique landmark

With more than 400,000 residents, Aksaray is a midsize city located in central Turkey. Despite being sandwiched by two of the very touristic central Anatolian provinces of Nevşehir and Konya, the overall tourism influx of Aksaray is growing steadily each day.

Let’s explore the historic places to see, natural wonders to visit and hidden gems to uncover in this city, sitting on the western frontier of the world-renowned Cappadocia region.

Our first destination is Acemhöyük, a 5,000-year-old hill town situated in the modern-day town of Yeşilova. Although Acemhöyük is a little outside central Aksaray, it takes no more than a 20-minute drive from the city to get there.

As one of the largest ancient settlements in Central Anatolia, Acemhöyük served as the capital of one of the small-scale kingdoms in the region during the era of the Assyrian Trade Colonies.

This town was an important hub for trade and commerce in ancient times. The most extraordinary findings in the area are the two palaces named Sarıkaya and Hatipler, which were used for administrative and royal purposes.

When I reached the site, its gate was left open, but there was no one around. A few minutes after my arrival, Hüseyin, a 12-year-old resident of the town, approached and welcomed me. He told me that his dad is the guard of the site but since he was a bit busy, Hüseyin was going to give me a tour. He was a talkative boy, and throughout my visit, we chatted about many different things.

“Abi (an informal way of addressing someone in Turkish, meaning "older brother"), I always wanted to be a doctor but after spending time with the archaeologists who were excavating here, I am more interested in being an archaeologist now,” Hüseyin said.

He gave me a nice tour and surprisingly knew a lot about the history of the region. Before we bid farewell, I wanted to give him some pocket money for the time he spent guiding me. He refused firmly and said: “I could never accept it, abi, it is my duty to be here. Have a safe trip!”

Sultanhan Caravanserai was constructed in 1229 by Sultan Alaaddin Keykubat (Keyqubat I) of the Seljuk Sultanate of Rum. his massive structure consists of two sections used in summers and winters, and it is the biggest caravanserai built by the Anatolian Seljuks in Turkey.

The main gate to the caravanserai is adorned with meticulously carved, intact ornaments and patterns that are of stunning beauty. Sultanhan includes dozens of rooms, a cafeteria, bathhouse, kitchen and stables. At the center of the open-air hall, you’ll find the mansion masjid (köşk mescidi), which had been used as a place of worship for centuries.

Aksaray Museum boasts a vast collection of more than 10,000 artifacts dating back to the Iron Age and Hellenistic, Roman, Byzantine and Seljuk eras. Some of the notable artifacts you will see at the museum are the skull of the young woman who was the subject of the world’s first known brain surgery, tools unearthed at Acemhöyük and items discovered at the Chalcolithic settlement of Güvercinkayası.

If you think that you would have to go to Egypt to see mummies, Aksaray Museum will surely save you a lot of time and effort. Mummies of people and cats found in Ihlara Valley and Çanlı Kilise (Bell Church) are on display at the museum, and are, in my opinion, its most intriguing attractions.

The final hall of the museum provides visitors with substantial insight into the recent history of Aksaray. Traditional dresses, kitchenware, furniture, jewelry, wooden slippers, towels and weapons displayed at the Ethnography Hall transport us back to previous centuries and show how people lived in Aksaray in the old times.

Within the recent COVID-19 restrictions, Aksaray Museum can be visited from 10 a.m. to 4 p.m. On Mondays, the museum is closed.

Situated right at the heart of the city, Aksaray Grand Mosque (Aksaray Ulu Camii) is also known as Karamanoğlu Mehmet Bey Mosque. The construction of the mosque was decreed and funded by Karamanoğlu Mehmet Bey (Mehmet I of Karaman), the prominent ruler of the medieval Turkic Principality of Karaman (Karamanid Dynasty), who was also known to be a staunch adherent of the Turkish language. During his rule, he issued a decree in the 13th century, a direct translation of which said: “From now on, nobody in palaces, councils, public areas and on streets will speak any language other than Turkish.”

The surroundings of the mosque are the liveliest areas of the city and the best spot to witness the daily life in Aksaray. After visiting the mosque, I would suggest taking a short walk around the nearby streets.

I find it useful to add that the streets are very narrow in central Aksaray, therefore, there are incessant traffic jams. Finding a public parking spot is nearly impossible. To add convenience to your trip, I would strongly recommend you leave your vehicle in one of the many paid parking lots downtown.

Despite the fact that no epitaphs or inscriptions were recovered to tell us about when and by whom this madrassa was built, it is widely believed that it was constructed during the era of the Principality of Karaman.

The history of this madrassa is a little confusing. Throughout the centuries, the purpose that this historical structure was used for changed many times. Until the year 1916, Zinciriye Madrassa was used as an Islamic school, which was within the initial purpose of the structure. Between 1927-1945, it was turned into a prison. The madrassa underwent restoration in 1955, and later on, it was used as a part of the Museum of Niğde. In the subsequent years, Zinciriye Madrassa served as a cafe and wedding hall. Almost a century later after the last Islamic lecture was given at this madrassa, in 2011, it was turned into a tourist attraction.

For me, it was very surprising to see that the artistic patterns, ornaments and traditional adornments on the walls and doors are still very well preserved as if they were carved the day before.

Even though it is currently not open on account of the COVID-19 pandemic, I would suggest you take a quick look at the Historical Pasha Hamam, which is the only active historical hamam in the city.

It makes me happy to say that Aksaray has its own version of Pisa Tower. Eğri Minare (its literal translation in English is "slanted minaret") has been erect in the same slanted position for 800 years. Speculations allude to the fact that the minaret was built this way, and it did not bend over the years.

It is believed to have been built in the era of Sultan Kaykhusraw II (II. Gıyâseddin Keyhüsrev) in the 13th century. Eğri Minaret is also called Kızıl Minare (Red Minaret) by the locals due to the fact that red bricks were used in its construction.