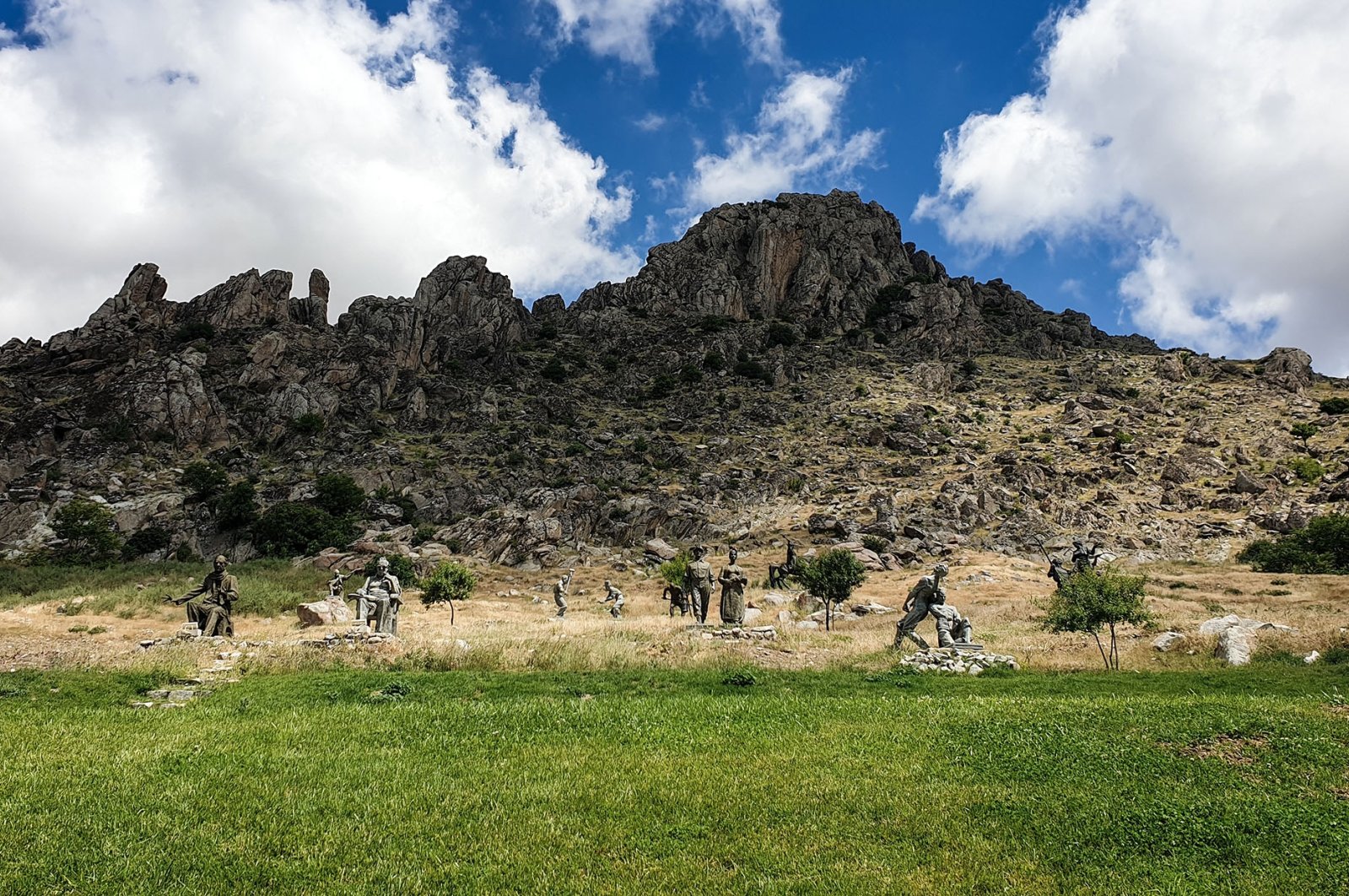 The open-air sculpture museum and the rocky hills in the background in Sivrihisar, Eskişehir province, central Turkey. (Photo by Argun Konuk)
by Argun Konuk Feb 12, 2021 12:10 pm

This week, we'll be heading to the historical town in Turkey’s lively central university city to discover some amazing, seemingly unknown places one can stumble upon while in lockdown

Over the weekend curfews that confine us to our homes in Turkey, I have been trying to quench my wanderlust by exploring Turkey on Google Maps. I have been asked by many about this hobby and how I go about it. If I do not find much by scanning the area I am looking for, I use keywords like “ruins,” “ancient city,” “Roman,” “Byzantine,” “Seljuk” and “Ottoman.” Frequently, by doing so, online map services will quickly display countless sites that are not otherwise shown.

As an example, when I was searching for little-known spots in Eskişehir, I managed to find a big stonemason Armenian church in the district of Sivrihisar. Upon visiting this town, I was awestruck by the number of fascinating attractions that are still unknown to many.

Sivrihisar is a small town where you can find abundant traces of settlement from the Roman, Byzantine, Seljuk and Ottoman eras.

After a 1 1/2-hour drive from downtown Ankara, I reached Sivrihisar. From the moment I entered the town, I was surrounded by beautiful cobblestone alleys, old but well-maintained houses on the roadside, friendly locals and archaic touristic structures.

I was driving toward the first spot on my day’s itinerary, not knowing that on Wednesdays there is an open-air farmer’s market set up in Sivrihisar where locals sell farm goods, vegetables, fruits and other organic products. I found myself blocked in the street with stalls around me. A friendly, elderly local knocked on my window and came to my rescue saying: “Son, I see that you are not from here. Let me help you reverse your vehicle. On Wednesdays, cars are not allowed in central Sivrihisar because we set up the market here. Drive through the back streets to reach the touristic sites.”

Another thing that caught my attention and pleased me was to see that everyone in Sivrihisar was abiding by the COVID-19 measures, and I did not see a soul without a mask. Considering that many small towns with low populations do not always comply with mask-wearing or social distancing, it was a great first impression to see that Sivrihisar takes this pandemic seriously.

The first destination I visited was the Sivrihisar Armenian Church, or as it is also known historically, the Surp Yerrotutyun Church. Built in 1650, this church is one of the biggest remaining Christian religious complexes in Turkey. It was destroyed in 1876 in a fire and then rebuilt in 1881. Despite the fact that not many of the original frescoes or wall paintings remain, the structure is still very well-preserved.

I was awestruck the second I saw how big and beautiful this church is, and even more so by the fact that this spot is not a very popular tourist attraction in Eskişehir.

An epitaph with clear inscriptions in Armenian that you can see above the entrance to the church translates to English as: “A church was built with the help of the congregation members in the name of the Holy Trinity (Surp Yerrotutyun). Under the reign of Patriarch Nerses and with the help of the faithful community of Sivrihisar, the memorable work of the architect Mintesh Panotyan, Surp Yerrotutyun Church was built in 1881.”

I wandered in and around the church for about an hour and explored every nook and cranny of the structure. It was an unforgettable experience to be able to see this religious complex where the Christian congregation used to gather and pray together decades ago.

You can visit Surp Yerrotutyun Church free of charge. There are no regulated visiting hours. Although I asked around, I could not find anyone to confirm the hours. The most plausible time period to visit this spot would be within the regular opening hours (9 a.m.-5 p.m.) of the tourist attractions in Turkey.

Parking is free and very convenient in this area.

Just across the road to the church, on the foothill of the vast rocky hills covering the northern area of Sivrihisar, you’ll see many uniquely designed open-air sculptures on display.

This intriguing site was founded by award-winning Turkish sculptor Metin Yurdakul, a native of Sivrihisar, in 2011.

This open-air museum can be visited 24/7 for free.

If you happen to come here close to evening time, watching the sunset from this spot is said to be amazing.

The Sivrihisar Clock Tower is indisputably the main symbol of the town. It was built in 1899 by Mahmut Bey, who was the district governor of Sivrihisar in that period.

From the tower and the glass observation deck abutting it, you can get the best view of Sivrihisar. The structure was erected on top of a high boulder, which makes it visible from pretty much any spot in Sivrihisar.

The church, the open-air museum and the clock tower are very close to each other. In fact, it would take no more than five minutes to walk between them.

Sivrihisar even has a site included in UNESCO’S Tentative Sites List. Ulu Mosque, or Sivrihisar Grand Mosque, is a marvelous example of traditional Turkish Anatolian architecture.

The history of this structure dates back to the 13th-century Seljuk period. The oldest epitaph of the mosque carries the dates of 1231 and 1232. Ulu Mosque was built by Seljuk Kadı Leşker Emir Celaleddin Ali, an Islamic judge. As one of the largest wooden-columned mosques in Anatolia, Ulu Mosque has 67 wooden pillars that support its roof. Moreover, some pillars are supported with marble Roman-Byzantine style architectural fragments, presumably acquired from the nearby ancient city of Pessinus.

In the history of the Republic of Turkey, Zaimağa Mansion is the only place where the Council of Ministers met anywhere other than Ankara. In 1922, when the Turkish War of Independence was at its most crucial stage, Atatürk and his generals, alongside civil officers, came to Zaimağa Mansion and made very important decisions about the future of the country. In this very place, an ultimatum was given to the occupying forces that stated the Turkish government would only accept the offered truce if European forces departed Anatolian soil at once.

The mansion belonged to the Seljuk-Turkish Zaimoğlu family, who served the Seljuk state as the chief family in the region.

So if you happen to come to the area, I highly suggest that you stop by Sivrihisar. Once you are in this town, it is very easy to cover the attractions by walking. And surely, after your visit, you will be left with nothing but a great day.