World heritage in Turkey: Ani, the forgotten ghost city of the northeast 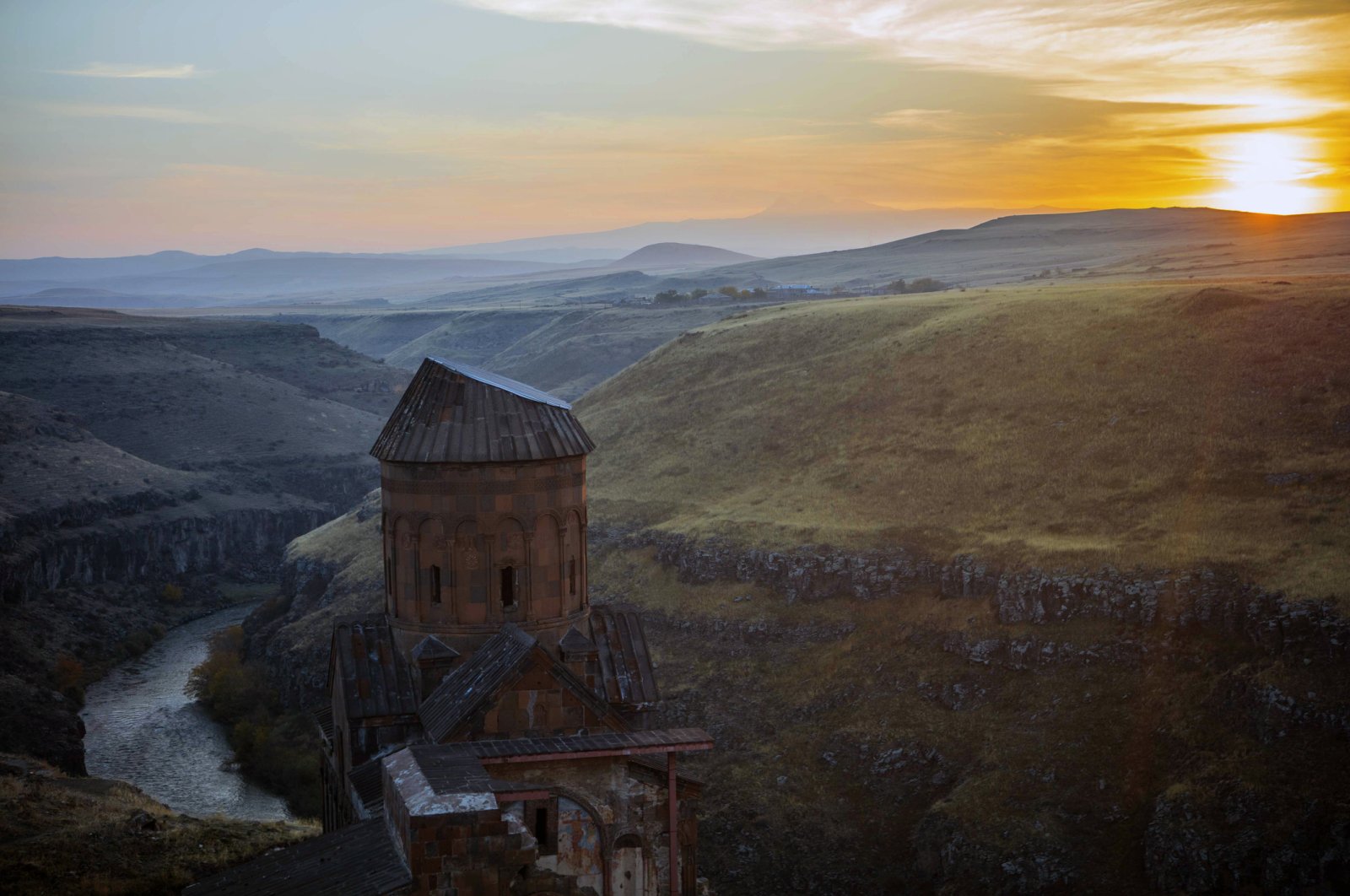 Commissioned by a wealthy merchant named Tigran Honents, the church was completed in the year 1215. (iStock Photo)
by Yasemin Nicola Sakay Mar 27, 2020 12:10 pm

Ani was once one of the largest cities in the world, ruling with might over the region, and although now it is an eerie, abandoned city of ghosts, with a little bit of imagination one can almost see the city as it might have been

You know that heavy feeling you get when you see an ancient site or ruin and can almost feel all the lives that have passed through it and try to imagine it in all its former glory? Well, look no further than Ani, a medieval Armenian city on the Turkish border, deemed worthy of being called a treasure of world cultural heritage when UNESCO recognized it as such in the early hours of July 15, 2016.

Once a hustling and bustling commercial center on a branch of the ancient Silk Road, sitting at the crossroads of other trade routes that flowed into the heart of Anatolia, Ani now lies off the beaten track – deserted and exotic in all its remoteness.

As with many other important archaeological sites, Ani, too, was built high on a secluded hilltop on fertile volcanic tuff, not far from a nearby water source. With deep-running gorges to its east and west that acted as natural borders and a great defense, the area was the perfect place to call home, once upon a time.

The first people to settle in the area did so around 3000 B.C., setting up camp on the banks of the emerald green Akhurian River (locally known as Arpaçay).

From the outside, the city seems like a fortress to many, with majestic walls saluting visitors, their sheer expanse growing ever-so overwhelming upon entrance through the Lion Gate but inside lies a different world.

If you were expecting perfectly preserved grandiose buildings that have stood the test of time, you are likely to be very disappointed. Time, nature, earthquakes and people through wars and invasion have not been kind to Ani, and it shows. It is run down, it is forgotten but that's what makes it different. It reeks of history. It carries that daunting air that makes you question your very existence, with the ruins of the city crumbling under the heaviness of all the countless experiences of Saka Turks, Sassanids, the Byzantines, Georgian Atabegs, Seljukians, Ottomans and Russians, just to name a few.

Ani saw its best times and expanded greatly when it became the capital of the Bagratid Kingdom of Armenia in the 10th and 11th centuries, growing to a population of about 200,000 at its peak, much larger than London at the time.

The ancient city shows its multicultural fabric in every square inch. From the Seljuk geometric wall patterns to frescoes and elaborate carvings, the influences of Armenian pagan rituals as well as Christian and Muslim religious traditions are evident in the city of tolerance.

The city exudes authentic beauty throughout all of the seasons. In winter, under a blanket of pristine snow, it looks like a long-lost frozen kingdom, in autumn it looks mystique and broody, hiding secrets awaiting to be discovered. Once warmer weather comes round, it almost springs back to life, growing more verdant with every raindrop and filling you up with a sense of adventure that doesn't come with many historic European sites choked by hordes of tourists. Thanks to its remote location, once you step in the ruins, it gives you this rush that makes you feel like you're the first people to (re)discover such profound age in a long time.

All the structures in Ani were built using local volcanic basalt, which was easy to carve, a functional insulator and came in many vibrant colors such as rosy reds and jet blacks. Not all of the buildings are situated on the central route used by guides or explorers nor are they easily accessible, and the usual half-day trips give you nowhere near enough time to explore every single one scattered across the plateau. So if you'd like to take it all in, it's best to set aside a few days.

The largest building standing in Ani is the cathedral. A rather Gothic looking structure with novel features such as pointed arches and a now nonexistent dome, the cathedral is an impressive piece of Armenian architecture. Its importance as a house of God was preserved even when it changed hands throughout history, becoming the first place where Muslim prayers were held in Anatolia after the Seljuk’s momentous victory in the Battle of Manzikert (1071), which opened up the gates of Anatolia to the Turks.

The cathedral, however, was greatly damaged in a devastating earthquake in 1319 as well as during the Mongol invasion, events that marked the beginning of the city’s great decline. By the time the 17th century rolled around, the city was left desolate.

There are numerous other sanctuaries and structures in the city that shed light on the past. The Ebul Menucehr Mosque, the first Turkish mosque on Anatolian soil, the churches of Amenaprgich (the Holy Savior Cathedral), Tigran Honentz (the Church of St. Gregory) and Abugamir Pahlavuni (the Church of the Holy Redeemer), in addition to countless monasteries and chapels dotting the vast meadows, are just a few that have contributed to Ani's historical reputation.

And as if you needed another excuse to catch the nostalgic Eastern Express, to embark on your journey to the ancient archaeological site of Ani all you need is to hop on that train from Ankara. Once you arrive in Kars' city center, it's up the hills we go by car or bus, over bends and rocks for about 42 kilometers, passing flocks of sheep and herds of cows, where the famous Kars gruyere comes from, slowly leaving behind city life to step back in time.