World heritage in Turkey: Göbeklitepe, the birthplace of human civilizations 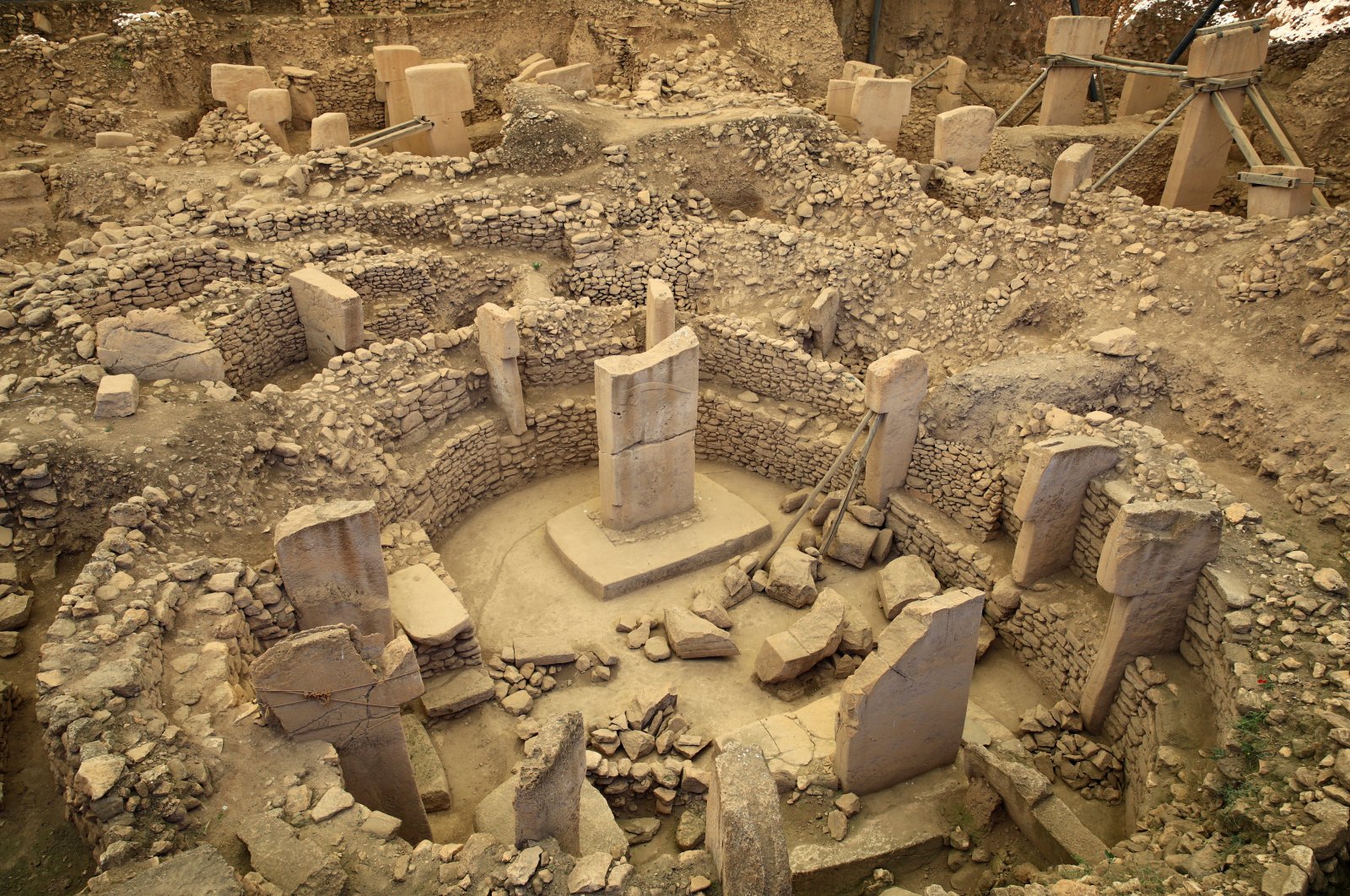 A general view of an excavation site is seen in Göbeklitepe in the southeastern province of Şanlıurfa, Turkey, June 2, 2019. (Reuters Photo)
by Asene Asanova May 29, 2020 12:00 pm
Edited By Yasemin Nicola Sakay

Known for its impressive megalithic architecture with characteristics such as T-shaped pillars, Göbeklitepe is one of the most mesmerizing and oldest archaeological finds in the world

An archaeological wonder, the "zero point of history" and one of the world’s most mesmerizing archaeological finds. Have I gotten your attention yet?

The outstanding 12,000-year-old Göbeklitepe complex, located 15 kilometers (9.32 miles) from Turkey’s southeastern city of Şanlıurfa, is the oldest temple site in human history and one of the most important discoveries of Neolithic research.

Crowned as the world's first temple, the prehistoric site of Göbeklitepe stands out among other archaeological sites with its impressive megalithic architecture. The most concrete findings at the archaeological site, which was noticed by researchers from Istanbul and Chicago universities during surface surveys in 1963, emerged in 1986 when a farmer found a statue while working in his field.

Considering that the stone he found was valuable, the farmer acted responsibly to hand this statue over to the Şanlıurfa Archaeology Museum. The sculpture, which was not understood at first, was taken under protection in the museum. German professor Dr. Klaus Schmidt, who later came to the city to carry out excavations in Nevalı Çori in the Hilvan district and saw the findings in the museum, started a detailed study thinking that these sculptures were important. With permission from the Culture and Tourism Ministry's General Directorate of Cultural Heritage and Museums, the German Archaeology Institute and the Şanlıurfa Museum started excavation works on the site under the chairmanship of Schmidt in 1995. Excavations unearthed T-shaped obelisks with figures of wild animals 3 to 6 meters in length and 40 to 60 tons in weight belonging to the Neolithic period.

Prior to the archaeological discoveries at Göbeklitepe, academic circles believed that humans began to build temples after adopting a sedentary life and leaving their hunter-gatherer practices behind; however, Göbeklitepe, which was built by hunter-gatherer communities before they even began to practice agriculture, completely shifted this school of thought.

Considered a true embodiment of humanity's cultural legacy, the site was included on the UNESCO World Heritage List at the 42nd World Heritage Committee meeting held on July 1, 2018.

According to UNESCO, Göbeklitepe was the meeting place of the last hunter-gatherers before humans switched to a lifestyle based on agriculture. Göbeklitepe is a unique sacred space and a sacred meeting point of the Neolithic period in terms of its location, dimensions, dating and monumentality of its architectural ruins and sculptural pieces.

Göbeklitepe is on a flat and barren plateau, with buildings fanning in all directions. In the north, the plateau is connected to a neighboring mountain range by a narrow promontory. In all other directions, the ridge descends steeply into slopes and cliffs. On top of the ridge, there is considerable evidence of human impact, in addition to the construction of the tell.

The tell includes two phases of use, believed to be of a social or ritual nature by site discoverer and excavator Schmidt. The unearthed circles of massive T-shaped stone pillars are believed to be the world's oldest known megaliths.

Göbeklitepe features enormous, round stone structures and monumental stone pillars up to 5.5 meters high. In addition, more than 200 pillars in about 20 circles have been discovered through geophysical surveys. Each pillar has a height of up to 6 meters and weighs up to 10 tons.

If you make your way to Şanlıurfa, you will want to discover other historical sites in the province. One of the most popular sites is Balıklıgöl (Fish Lake). Known more commonly in English as "The Pool of Abraham," this is one of the several attractions Şanlıurfa has to offer. Legend has it that the pool is where Prophet Abraham was thrown into the fire by Nimrod. In this account, the fire turned into the pool and the firewood into fish. Hence, Balıklıgöl and the carp fish in this pool are considered sacred.

After visiting Balıklıgöl, you can climb to Şanlıurfa Castle, which is located on the northern slope of Damlacık Mountain to the south of Şanlıurfa city. The castle is considered the city's balcony and the starting point of the Balıklıgöl legend. It is believed that Abraham was catapulted into the fire, now known as Balıklıgöl, from the two columns here. Although you need to climb a decent number of steps to reach the castle, once you reach the top, you are embraced by an unmatchable view of the old city. It is the perfect backdrop for spectacular photographs.

You can also visit the now-deserted Harran ruins, well-known for their distinct beehive-like mud houses, which were once a major economic, religious and education capital. Mentioned in Genesis as Haran, Harran is believed to be the place where Prophet Abraham lived with his wife and son.

All in all, starting with the breathtaking historical sites and ending with delicious local food, a trip to Şanlıurfa will definitely leave a mark on your heart.