World heritage in Turkey: Hierapolis, the thermal spa city of the ancients and white paradise Pamukkale 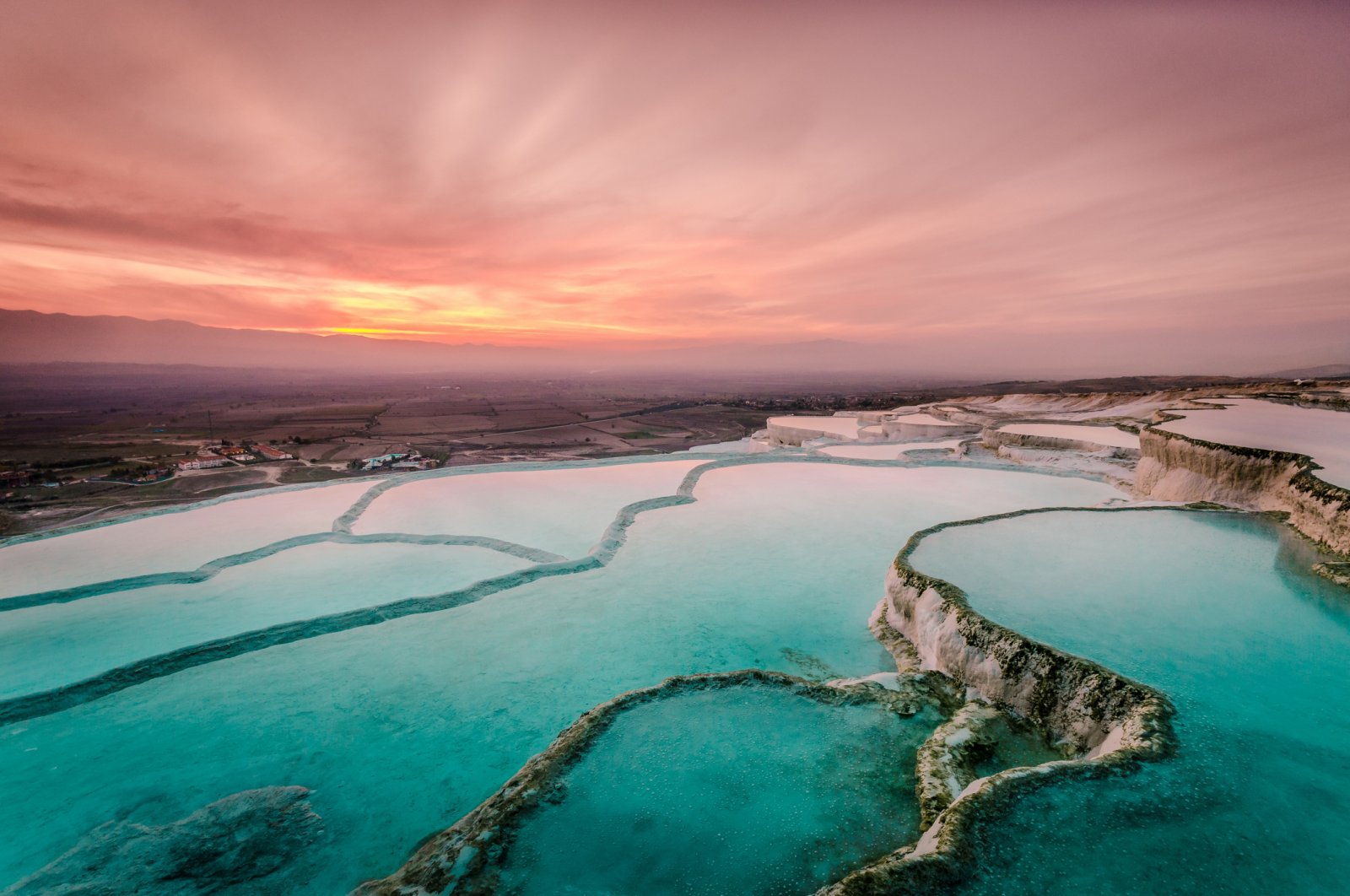 The natural pools created by the carbonate travertines are spectacular during sunset. (iStock Photo)
by Yasemin Nicola Sakay May 08, 2020 7:45 pm

Pamukkale provides a perfect combination of natural and man-made wonders with its travertines as white as cotton stretching to the horizon, standing over the ancient ruins of the spa town Hierapolis

This week we discover an ancient city of healing, spas and immense natural beauty, a place so extraordinary that it is literally called “cotton castle” in Turkish. No snow or sandy beaches, Pamukkale and the ancient city of Hierapolis is a new kind of “white paradise.”

Declared a UNESCO World Heritage site in 1988, Pamukkale and Hierapolis top the list of most visited places in Turkey with over 2 million visitors annually.

Shall we delve into what makes it so special?

The birth of a sacred city

Hierapolis of Phrygia was a major city in the Aegean region in ancient times. It first entered the historical scene around 2,000 B.C.

It was established by Eumenes II, the king of Pergamum, clearly, a man of leisure who appreciated the finer things in life. After all, Hierapolis was established as a thermal spa city.

The city saw good times under the king's rule but not until a few hundred years later did Hierapolis reach its full potential, flourishing far and wide in the second and third centuries, this time under the rule of the mighty Roman Empire.

What makes its growth even more astonishing is that it came after a devastating earthquake in A.D. 60 that left the city in complete ruin, but like a phoenix born from its ashes, Hierapolis sprung back to life when it was rebuilt.

By the mid-fourth century, Emperor Constantine converted to Christianity, establishing Constantinople as the empire’s "new Rome" and turned the town of Pamukkale into a bishopric.

The town’s religious significance, however, actually dates back a few centuries. In A.D. 80, St. Philip, one of the 12 apostles of Jesus, was crucified in this ancient city by Emperor Domitian, paving the way for the site to become an important center of religion for the eastern Roman Empire (in other words, the Byzantines). Several churches, as well as Philip’s martyrium building from the fifth century, remain as evidence.

When the seventh and eighth centuries rolled around, however, began the city's untimely demise. History books have been strangely silent about what happened. Another monstrous tremor could be to blame.

Now located in the modern-day province of Denizli, the ancient city has an abundance of well-preserved structures to visit, from a Necropolis to the famed Domitian Gate that opens up to hell to a theater with reliefs illustrating the mighty Olympian twins, Apollo, the god of the sun, and Artemis, the goddess of the moon.

The most famous ruins left from the grand Greco-Roman period include remnants of baths, a necropolis and theater, remains of the Byzantine city walls, the ruins of the octagonal Martyrs' Church of St. Philips and the Arch of Honor of Emperor Domitian from the first century.

Springs that heal the soul

How can destruction and devastation bring so much beauty? Travertine pools big and small are living proof. After a series of columns collapsed in an earthquake in A.D. 692, they caused thermal water to accumulate in grooves and troughs, creating the wondrous site we see today.

Overlooking the ruins of the ancient and sacred city of Hierapolis, Pamukkale is anything but ordinary. Though from afar they look soft and ethereal like a scene out of a fairy tale, the white limestone travertines, shaped by calcium-rich hot springs, are strong and sturdy and full of healing powers.

Cascading down a steep hill, the terraces are filled with calcium-rich thermal waters deemed magical by many for rheumatism to cardiovascular diseases, as well as skin diseases like eczema and psoriasis. Sufferers of such illnesses have flocked to the site seeking to heal their ailments and find some relief.

Inside a particularly well-preserved Roman bath in the ancient city also lies a treasure trove of history. With high-vaulted ceilings, the structure contains an archaeological museum home to ornate sarcophagi. Plus, to blend learning and relaxation, there is the Antique Pool just behind the museum, with the warm spring waters calling out to you to take a relaxing swim between ancient columns and marble ruins. So bathe in the waters like the beautiful Cleopatra once did (or so they say) and let the toasty 36 degree Celsius, mineral-rich waters wash all your woes away.

Here’s a tip for lovers of our moon. If you spend a night in Pamukkale and coincide your visit with a full moon, you can go swimming in the small lake just down the slope after dark. With the moonlight glimmering on the waters and bathing the deserted terraces in a pale stream of light, you’ll discover the true meaning of peace.

Other spots to visit

If you thought the white terraces were just too bright and pristine for your taste, you can always hop over to the village of Karahayıt 5 kilometers away, which also houses many of these hot spring pools, just in more earthy shades. High in iron and sulfur, the hot waters have colored the rocks in bright reds, sunny yellows and musky greens. The waters of the thermal spring at Karahayıt are much hotter than those at Pamukkale, about 60 degrees Celsius. So if you like to have scalding hot showers where your skin literally melts off, this is the place for you. The waters here also have therapeutic properties for the bones and skin, and the sulfur-rich waters with antibacterial properties are said to be great for acne as well.

Tip: Bring a waterproof bag for your clothes and shoes and wear swimwear when visiting the springs and travertines. This is especially important at Pamukkale; shoes are not permitted so as not to cause erosion or harm the pristineness of the natural formations.

The ghastly gate to hell

Depending on which myths you are more fond of, you might have heard this structure also being called Hades’ Gate, rooted in ancient Greek mythology, or Pluto’s Gate, as it was known during Roman rule. Despite its various names, there is one thing almost everyone can agree on: It was, indeed, the gateway to hell and killed those who got too close.

Legends say, those who dared to approach the deadly grotto dropped dead immediately and were immediately taken away to the underworld, the lair of the ancient god of death. The Romans even sacrificed bulls there as offerings to the god.

It may not have been the angry god's breath like the ancients believed, per se, but scientists have found that noxious plumes of highly-concentrated carbon dioxide that is deadly to the living are released from the springs. Nowadays, though in smaller amounts, the gasses still kill insects, birds and small animals from time to time.

Hot air balloon tours, usually synonymous with Turkey's Cappadocia region for exploring its fairy chimneys, also offer exquisite views of Pamukkale's famous travertines. Especially at dusk, the sun, the thermal springs and the historical ruins offer a visual treat – though I must warn you, afternoons and evenings, as well as the whole summer season, are usually the most crowded.

So maybe next winter, when you are tired of the gloomy weather, cold and constant rain – and if this pandemic is over, of course – take a trip to Pamukkale to warm up your bones in the hot springs and journey into the past at Hierapolis. And if my arthritis-ridden joints start acting up again, perhaps I’ll give those healing waters a try and report back to you on that.