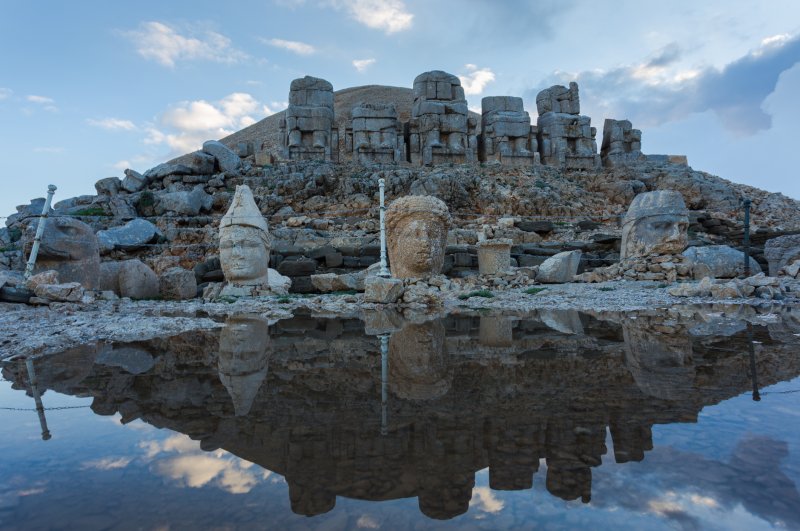 Turkey's majestic Mount Nemrut continues to attract thousands of tourists, who hope to experience its breathtaking sunrises and sunsets

There are few places on Earth that beguile visitors with majesty and a mystic aura. Mount Nemrut in southern Turkey is one of those places. However, it is not its height of a towering 2,134 meters that makes Nemrut a UNESCO World Heritage-worthy site, but rather, it is the gigantic statues of gods commissioned by King Antiochus I of Commagene for his own tomb that makes it a world wonder.

Considered one of the most ambitious constructions of the Hellenistic period, the statues represent the dual cultural background of the Kingdom of Commagene as they were inspired by both Greek and Persian mythologies. Founded after the breakup of Alexander the Great’s empire, Commagene was, in fact, a junction of eastern and western civilizations that helped Nemrut and its statues be welcomed by UNESCO in 1987 for being a site of “Outstanding Universal Value.”

The Kingdom of Commagene

The giant statues on Mount Nemrut represent the gods worshiped by the people of Commagene and were specifically built to accompany King Antiochus's tomb. However, the tomb of this great king has yet to be located despite years of excavations, covering the site with a blanket of mystery. In order to understand why such a remarkable place of worship – and art – was built more than 2,000 years ago, we need to go back and try to understand the kingdom better.

Founded by Mithridates I Callinicus, who claimed to be a descendent of the King of Armenia, the Kingdom of Commagene dominated Mesopotamia and the great Euphrates between 109 B.C. and A.D. 72. Founded by Macedonians in a land where Persian culture reigns, Commagene became a personification of the marriage of East and West, which can be seen in its culture. Although the people used Greek culture, the rulers of this kingdom did not hide their admiration for the Persian, Assyrian and Armenian cultures.

Archeologists believe that Mount Nemrut was a sacred site for the people of Commagene, which is why King Antiochus I wanted his tomb to be built on the top of the mountain and, to be honest, he was probably a megalomaniac since he thought he was equal to the gods. When the Romans conquered the kingdom, the statues and the place of worship on this majestic mountain were abandoned, and the statues, believed to be 50 meters long when they were first erected, were left to their fate.

The site on the top of Mount Nemrut was never a secret, but it was not investigated until German engineer Karl Sester started to excavate it in 1881. However, the spotlight didn't turn to Nemrut until Friedrich Karl Dörner started systematic research in the area in 1939. After years of excavations, the Middle East Technical University (METU) in Ankara prepared a comprehensive plan to excavate and research the mountain as well as its surrounding area in 2006, which is still ongoing.

Visiting the gods of Mount Nemrut

After hiking all the way to the summit, three different tumuli – east, north and west – welcome you. Although the north tumulus, which is also called the north terrace, was never finished, the terraces in the east and west will make your time and the calories you burn worth it.

The east terrace contains the Gallery of Gods, the Gallery of Ancestors and the altar. The main group of statues were the figures of five deities, representing the pantheon of the newly established religious cult. These figures were guarded by statues of a lion and an eagle, standing on both sides. The lion, the king of animals, represents earthly power, and the eagle, the herald of the gods, represents heavenly power. The western terrace also has almost the exact same statues; however, earthquakes and harsh weather conditions have weathered the statues differently over the centuries. While the thrones on the east terrace are more intact, it is the heads of the sculptures on the west terrace that are still in good shape.

On the back of the gigantic thrones of the gods both in the east and west terraces, there is an inscription of 237 lines written in Greek letters, containing detailed information on the legal and historical aspects of the creation of the site on Mount Nemrut, the establishment of a new religious cult and the will of King Antiochus I.

Bonus: The famous sunrise and sunset

If you have made up your mind to visit Mount Nemrut, there is an unwritten rule you had better follow: You must wake up and walk all the way up to witness the epic sunrise on the top of Mount Nemrut. If you are not an early bird, you can always catch the sunset, which is also magnificent. However, the one thing that you should keep in mind is to bring warm clothes on your way to the summit as it is very cold before sunrise and after sunset, even in the middle of summer.