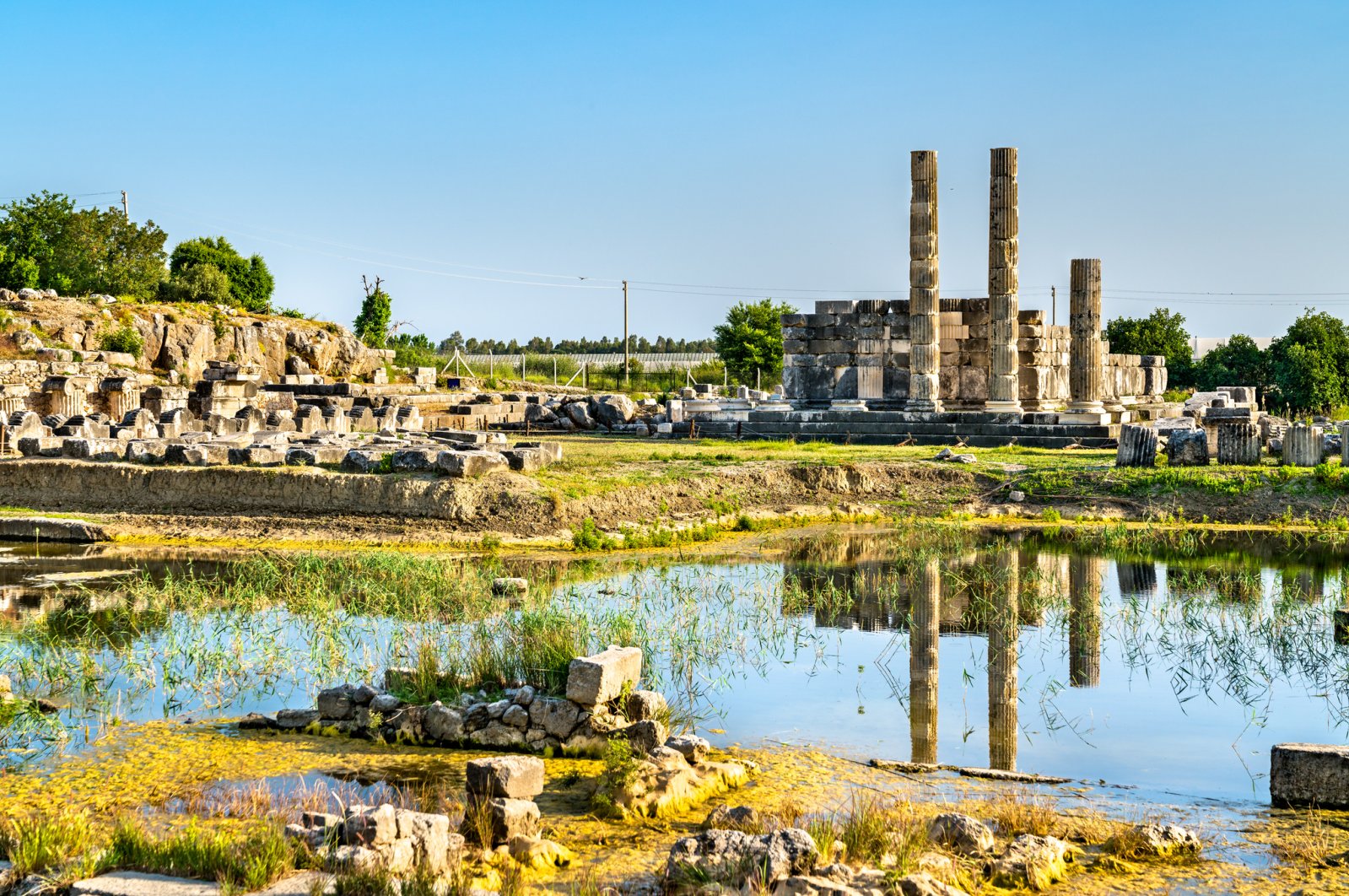 The water in and around the ruins of Letoon create picture-perfect sights. (iStock Photo)
by Asene Asanova Jun 12, 2020 11:50 am
Edited By Yasemin Nicola Sakay

Situated in the most picturesque area of Turkey's southern coast, the sites of Xanthos and Letoon illustrate the continuity and a unique combination of Anatolian, Greek, Roman and Byzantine civilizations

Home to dozens of civilizations, Turkey hosts many outstanding historical sites as the country once was the cradle of deep-seated Greek and Roman civilizations.

During the past weeks, we have already “virtually” traveled to most of the architectural marvels left behind by them, including Troy, Ephesus, Hierapolis, Göbeklitepe and Pergamon.

This week we are going to visit another historical treasure located in the southwestern part of Anatolia – the archaeological complex of Xanthos-Letoon.

Located within the boundaries of Turkey’s Antalya and Muğla provinces, Xanthos-Letoon is perhaps the grandest and most unique architectural example of the ancient Lycian civilization, which was one of the most important cultures of the Iron Age in Anatolia and the first people to establish a democratic union in history. In fact, in an ancient world full of fighting and bloody wars, Lycians managed to live a harmonious and peaceful life under a stable form of democracy.

The two neighboring historical settlements are the living proof of the continuity and unique combination of the Anatolian, Greek, Roman and Byzantine civilizations.

Xanthos was first a center of culture and commerce for the Lycians, with Persians, Greeks and Romans later taking turns to conquer the city and occupy adjoining territory. Also known as Xanthus, the former Byzantine bishopric remains a Latin Catholic titular see. After the Byzantine Empire dissolved in the 15th century with the fall of Constantinople, the region came under Turkish rule.

Xanthos is a surviving example of Lycian traditions and especially its funerary art. With its rock-cut tombs, pillar tombs and pillar-mounted sarcophagi, Xanthos is home to some unique examples of ancient burial edifices.

East of the Xanthos River (known more commonly as Eşen Çayı in Turkey), the river on which the city is situated, lies the Lycians' first monumental zone. The old Lycian Acropolis, which was remodeled during the Hellenistic and Byzantine periods, lies in the zone. During Byzantine and Hellenistic times, a church was built at the northeast corner while an advanced defensive structure protected the western side of the citadel along the river.

Letoon (Letoum), on the other hand, was the cult center of Xanthos, the ancient federal sanctuary of the Lycian province and Lycian League of Cities. It was one of the most important religious centers in the region at the time. Located south of the village Kumluova in Muğla's Fethiye district, Letoon is about 4 kilometers (2 1/2 miles) south of Xanthos along the Xanthos River.

Archaeological finds at the site, though never a fully-occupied settlement but still, an essential religious center of its time, date back to the late sixth century B.C. During excavations many inscriptions have been unearthed at the site. Perhaps the most famous one, the trilingual inscription which dates back to 337 B.C. features a text in Lycian and Greek coupled with an Aramaic summary. The inscription was discovered near the temple of Apollo, the Olympian God of sun and light. Letoon also had a nymphaeum dating back to Hadrian, built on a water source that was considered sacred, though now only ruins remain.

The archaeological twin sites Xanthos and Letoon have been on UNESCO's World Heritage Sites list since 1988. As the center of ancient Lycia, Xanthos has attracted many students of Anatolian civilization since the early 19th century. Many important artifacts have been found in the city. Two tombs, the Nereid Monument and the Tomb of Payava, are now on display at the British Museum in London. The Harpy Tomb is still located within the ancient city and its ruins.

“Xanthos-Letoon strikingly illustrates the continuity and unique combination of the Anatolian, Greek, Roman and Byzantine civilizations. It is also in Xanthos-Letoon that the most important texts in the Lycian language were found. The inscriptions engraved in rock or on huge stone pillars on the site are crucial for a better understanding of the history of the Lycian people and their Indo-European language,” UNESCO says on its website.

The inscriptions found on the ruins are considered exceptional evidence of this unique and long-forgotten Indo-European language.

Turkey’s Antalya and Muğla provinces are known not only for their historical sites but also for their outstanding natural beauties. The provinces are like a haven for those planning a holiday with sandy beaches, alluring caves and other natural attractions.

A well-known German online hotel reservation website marked 13 most beautiful beaches in Turkey and 11 out of those are located in Antalya and Muğla.

One of the most popular beaches in Antalya’s Kaş district is the 12-kilometer-long Patara beach, which is known as one of the longest beaches in the region. It is located close to another famous ancient city – Patara, the capital of the ancient Lycian civilization. Turkey also declared 2020 as the year of Patara to highlight its undersubscribed cultural value.

Patara was a flourishing maritime and commercial city on the southwest coast of Lycia on the Mediterranean coast of Turkey. It is said to be the birthplace of St. Nicholas (aka Santa Claus) in 270 A.D., who lived most of his life in the nearby town of Myra (nowadays known as Demre). The ancient city has great historical riches such as an amphitheater, a historic lighthouse, paved streets, baths, a Roman triumphal arch, the Tepecik cemetery, a basilica and various temples.