US may need to extend social distancing until 2022, study says 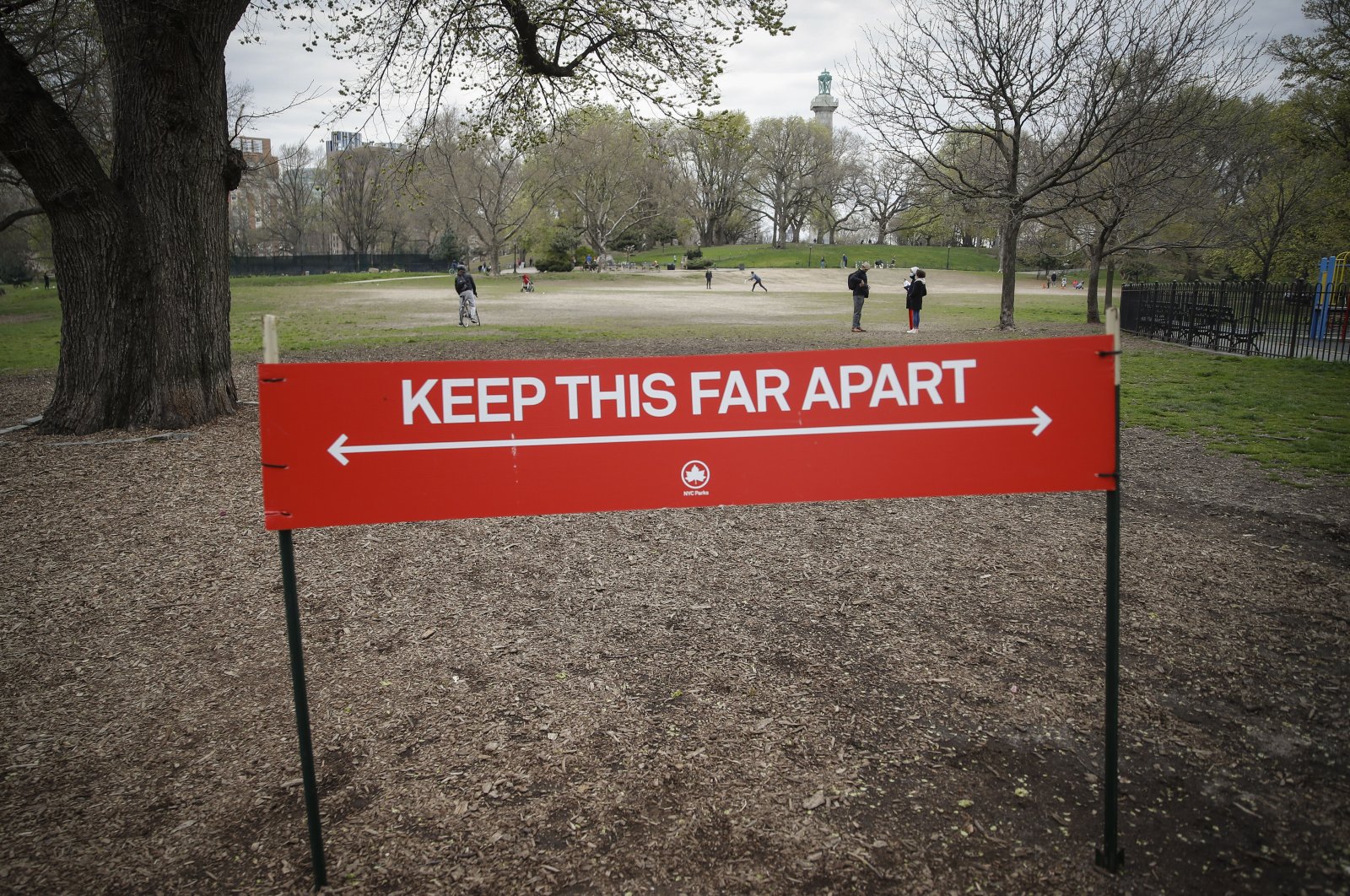 A sign by the New York City Department of Parks and Recreation indicates the appropriate measurement for social distancing as pedestrians linger in a field at Fort Greene Park in New York City, New York, U.S., April 14, 2020. (AP Photo)
by Compiled from Wire Services Apr 15, 2020 10:15 am
RECOMMENDED

The United States may need to endure repeated periods of social distancing measures adopted during the coronavirus outbreak until 2022, according to researchers at the Harvard School of Public Health. A one-time lockdown won't halt the novel coronavirus, it said.

"Intermittent distancing may be required into 2022 unless critical care capacity is increased substantially or a treatment or vaccine becomes available," the Harvard researchers said in findings published Tuesday in the journal Science.

The Harvard team's computer simulation assumed that COVID-19 will become seasonal, like closely related coronaviruses that cause the common cold, with higher transmission rates in colder months.

But much remains unknown, including the level of immunity acquired by previous infection and how long it lasts, the authors said.

"We found that one-time social distancing measures are likely to be insufficient to maintain the incidence of SARS-CoV-2 within the limits of critical care capacity in the United States," lead author Stephen Kissler said in a call with reporters.

"What seems to be necessary in the absence of other sorts of treatments are intermittent social distancing periods," he added.

The duration and intensity of lockdowns can be relaxed as treatments and vaccines become available. But in their absence, on and then off distancing would give hospitals time to increase critical care capacity to cater for the surge in cases that would occur when the measures are eased.

"By permitting periods of transmission that reach higher prevalence than otherwise would be possible, they allow an accelerated acquisition of herd immunity," said co-author Marc Lipsitch.

Giving examples of South Korea and Singapore, the researchers wrote that effective distancing could reduce the strain on health care systems and enable contact tracing and quarantine to be feasible.

The study acknowledged that prolonged distancing would most likely have profoundly negative economic, social and educational consequences.

Conversely, too much social distancing without respite can be a bad thing. Under one modeled scenario "the social distancing was so effective that virtually no population immunity is built," the paper said, hence the need for an intermittent approach.

The authors acknowledged a major drawback in their model is how little we currently know about how strong a previously infected person's immunity is and how long it lasts.

The study added that even in the case of "apparent elimination," SARS-CoV-2 surveillance should still be maintained, as a resurgence in contagion may be possible as late as 2024.

The World Health Organization (WHO) has warned that infections had "certainly" not yet peaked. Over 2 million people globally have been infected and more than 124,000 have died in the most serious pandemic in a century.

The epicenter has shifted from China, where the virus emerged in December, to the U.S., which has now recorded the most deaths.

At present the best guesses based on closely related coronaviruses are that it will confer some immunity, for up to about a year. There might also be some cross-protective immunity against COVID-19 if a person is infected by a common cold-causing betacoronavirus.

One thing, however, is almost certain: The virus is here to stay. The team said it was highly unlikely that immunity will be strong enough and last long enough that COVID-19 will die out after an initial wave, as was the case with the SARS outbreak of 2002-2003.

Antibody tests that have just entered the market and look for whether a person has been previously infected will be crucial in answering these vital questions about immunity, they argued, and a vaccine remains the ultimate weapon.

Outside experts praised the paper even as they emphasized how much remained unknown.

"This is an excellent study that uses mathematical models to explore the dynamics of COVID-19 over a period of several years, in contrast to previously published studies that have focused on the coming weeks or months," Mark Woolhouse, an infectious disease epidemiologist at the University of Edinburgh said.

"It is important to recognize that it is a model; it is consistent with current data but is nonetheless based on a series of assumptions – for example about acquired immunity – that are yet to be confirmed."