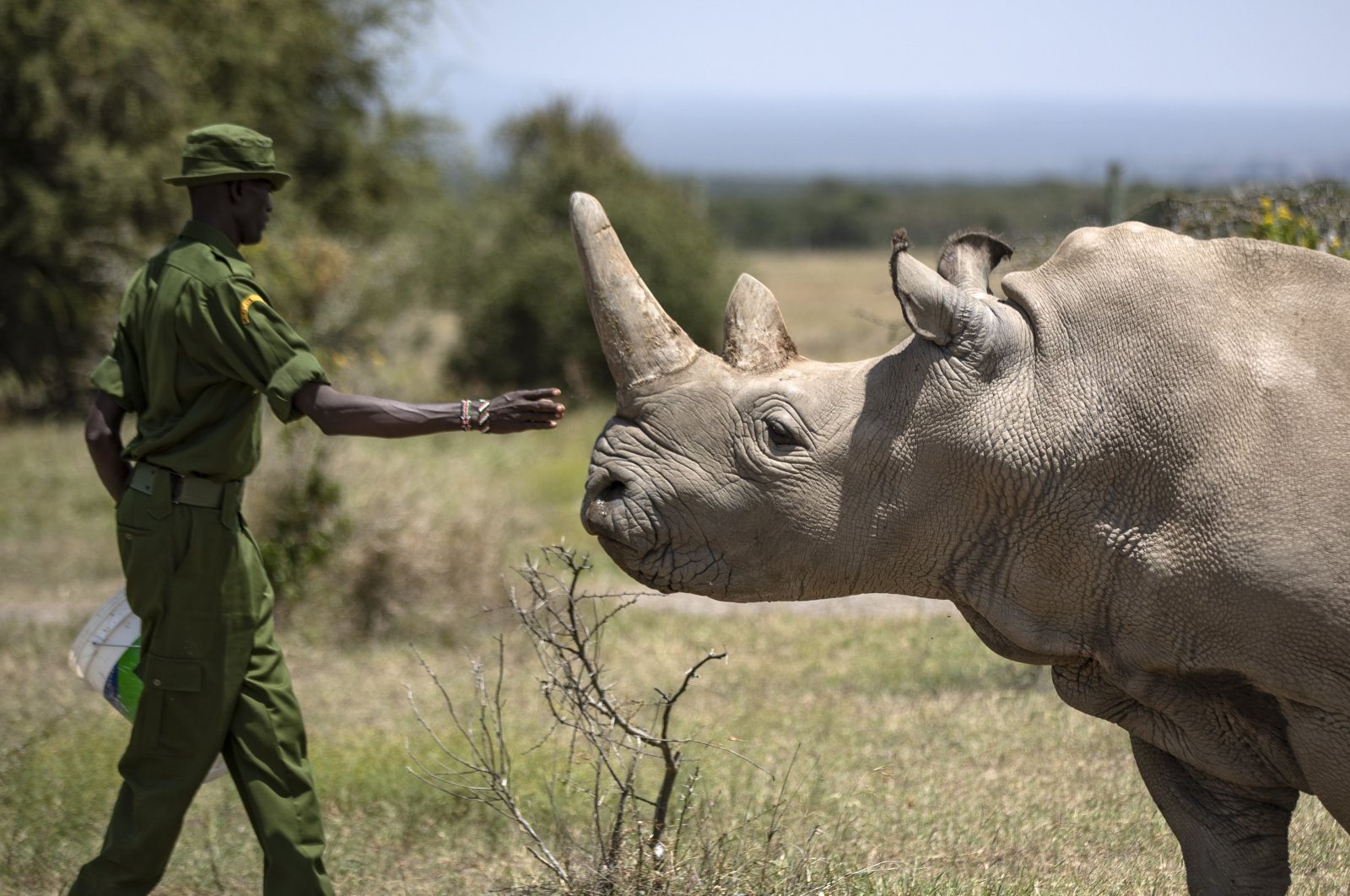 In this Friday, Aug. 23, 2019, file photo, a ranger reaches out toward female northern white rhino Najin, 30, one of the last two northern white rhinos on the planet, in her enclosure at Ol Pejeta Conservancy, Kenya. (AP File Photo)
by ASSOCIATED PRESS May 25, 2020 11:21 am
RECOMMENDED

The COVID-19 pandemic has put the efforts to create a very special baby on hold in Kenya.

Groundbreaking work to keep alive the nearly extinct northern white rhino subspecies – population, two – by in vitro fertilization has been stalled by travel restrictions. And time is running out.

The two northern white rhinos are female. The goal is to create viable embryos in a lab by inseminating their eggs with frozen sperm from dead males, then transfer them into a surrogate mother, a more common southern white rhino.

As of January, three embryos had been created and stored in liquid nitrogen, but further key steps now have to wait.

"It has been disrupted by COVID-19, like everything else,” said Richard Vigne, managing director of Ol Pejeta Conservancy in Kenya, home of the two remaining rhinos. "That is, the process of collecting more eggs from the females as well as the process of developing the technique to introduce the northern white rhino embryo into the southern white rhino females.”

It is an international effort that includes conservationists from Kenya, the Czech Republic, Germany and Italy – many affected by closed borders or restricted travel. For those involved in the effort, acutely aware of time, the delay can be painful.

The procedure to create viable embryos has proven to be safe, they say, and can be performed regularly before the animals become too old. In January, the transfer of the embryos to surrogates had been planned for the coming months. In March, the plan had been to collect another round of eggs from the two remaining females.

Because those eggs are limited, scientists are working with embryos from southern white rhinos until they can establish a successful pregnancy. Seven or eight transfers so far have failed to take hold. A receptive female is needed, along with the knowledge of exactly when she ovulates.

"We know time is working against us,” said Cesare Galli, an in vitro fertilization expert based in Italy. "The females will age, and we don't have many to choose from." He hopes restrictions on international travel will loosen in the coming weeks so key steps can resume in August. "The problem is quite serious,” he said. "Certainly as soon as international travel is resumed, it will be the first priority to go” to Kenya and collect more eggs from the two females.

Even when travel can resume, another problem looms. The Ol Pejeta Conservancy also is home to primates – nonhuman primates – which are susceptible to the coronavirus, Galli said. "If you bring in the virus accidentally, it's an additional risk,” he said. "You threaten one species to save another.”

So for now, the two northern white rhinos wait. Fatu and her mother, Najin, roam and graze within sight of rangers in the company of one intended surrogate mother, a southern white rhino named Tewa. One of the rhinos’ keepers, Zachariah Mutai, was sympathetic. "They won’t have a chance anymore to have babies in a natural way, but the only hope is to save them with the scientific way,” he said.

The ultimate goal is to create a herd of at least five animals that could be returned to their natural habitat in Africa. That could take decades. Decades of poaching have taken a heavy toll on rhino species. The animals are killed for their horns, which have long been used as carving material and prized in traditional Chinese medicine for their supposed healing properties.

The last male northern white rhino was a 45-year-old named Sudan, who gained fame in 2017 when he was listed as "The Most Eligible Bachelor in the World” on the Tinder dating app as part of a fundraising effort. He was euthanized in 2018 because of age-related illnesses.

This effort to keep the northern white rhino subspecies alive has been a good way to draw the world’s attention to the issue of extinction, Vigne said. "The rate of extinction of species on this planet is now the fastest that has ever been recorded, much faster than the rate dinosaurs went extinct, and that is as a result of human activity,” he said. "So there comes a time where we have to draw a line ... and say no more.”