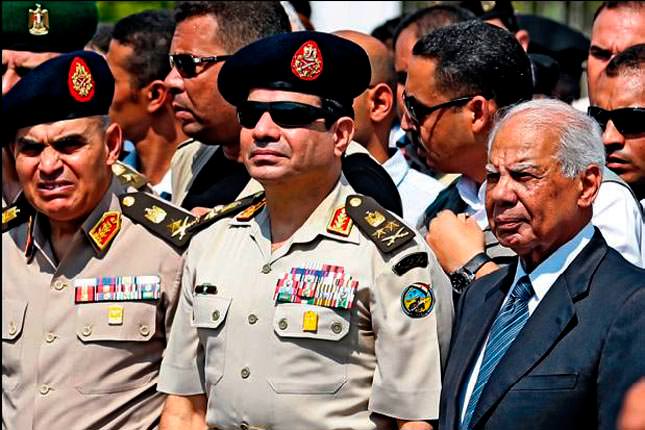 by Feb 25, 2014 12:00 am
Following a cabinet meeting in Cairo yesterday, Egyptian Prime Minister Hazem al-Beblawi's government announced its resignation. "The cabinet decided in light of the current situation that the country is going through... to submit its resignation to Adly Mansour, the interim president," ministers said in a statement. "For the past six to seven months, the government assumed its responsibilities and duties... the government did not spare any efforts to get Egypt out of a bad phase," Beblawi said. He added, "This is not the time for personal interests." The move comes ahead of a presidential poll in mid-April which will likely bring Army Chief Field Marshal Abdel Fattah al-Sisi to power. Sisi has yet to announce his candidacy but aides say he has already decided to run.

Meanwhile, the trial of Egypt's ousted President Mohammed Morsi and other Islamist leaders, charged with escaping from prison in the 2011 uprising, was postponed Monday for an appeal court to consider a request to have the presiding judges changed. Lawyers for two of the defendants made the request at the previous session, reportedly due to the judges' refusal to remove a cage in which the defendants were kept during the trial.

The Cairo Appeals Court will start considering the request on March 1 and the case will resume once that procedure has finished. Morsi has previously appeared along with 21 other leaders from the Egyptian Muslim Brotherhood, accused of charges including abducting police officers and storming and escaping prisons during the uprising against former President Hosni Mubarak. Morsi, Egypt's first democratically elected president, was deposed by the military in July after mass protests against his one-year rule. Morsi was arrested soon after the start of anti-government protests in late January 2011. A few days later, he escaped from the Wadi al-Natrun prison complex, located on a desert highway 160 kilometers north-west of the Egyptian capital.