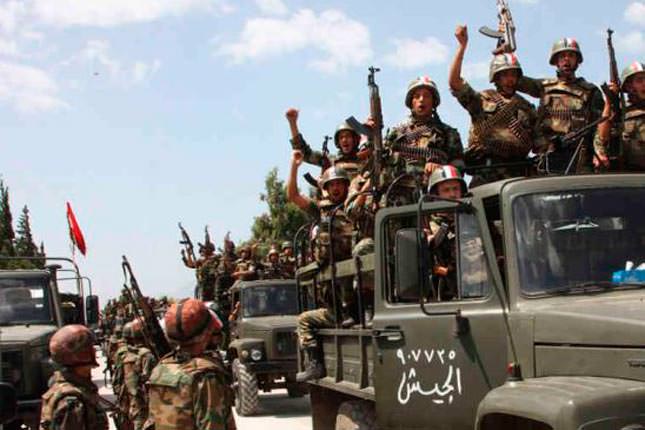 by Feb 25, 2014 12:00 am
Syrian troops battled rebels yesterday over a strategic district in the northern Syria city of Alleppo that could be key to securing a nearby prison and laying siege to the city's rebel-held east. The Al-Watan daily, which is close to the government, said troops had advanced in the Sheikh Najjar district of Syria's second city and onetime economic hub. The prison has been attacked multiple times by rebels hoping to free the approximately 3,500 detainees inside, who are reportedly being held in dire conditions. In early February rebels launched a major assault on the facility, beginning with a suicide car bombing at its main entrance. Opposition forces were able to overrun parts of the facility for hours, before regime warplanes unleashed a bombing campaign against them. The rebels were pushed back, but retained control of part of the sprawling complex. Large parts of the fence surrounding the building collapsed during the attack, and the rebels have continued to try to penetrate the facility. Rebels carried out another suicide bombing at the prison Thursday, killing at least eight soldiers. Aleppo has been largely divided between government control in the west of the city and rebel control in the east since fighting broke out there.

Regime forces have made advances on the southeastern outskirts of the city in recent months, securing and reopening the international airport there.

Meanwhile, Salim Idriss who was the Chief of General Staff of the Free Syrian Army (FSA), was discharged and Abdullah al-Bashir, a favorite of the United Arab Emirates and Saudi Arabia, was appointed his replacement.
Al-Bashir expressed his surprise in the interview with New York Times.

When a friend called him to give the good news, he asked what was it about.
He firmly stresses that anybody did not give information about his appointment: "I swear to God, no one was in touch with me… I knew nothing about it."