Despite Iraq's troubles, archaeologists are back 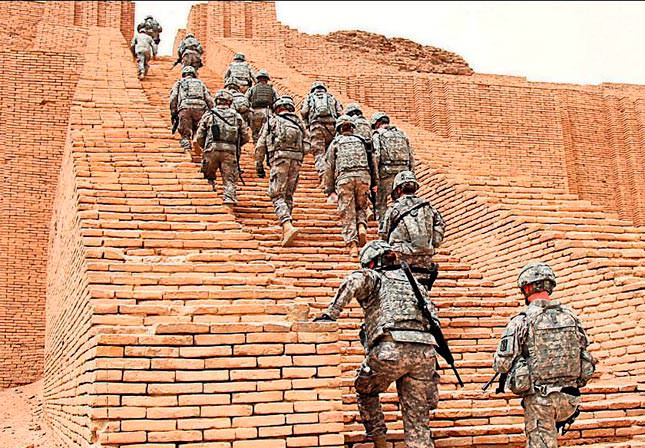 Ur's palaces and temples lie in ruins, but its hulking Ziggurat still dominates the desert flatlands of what is now southern Iraq, as it has for millennia

Climbing the Ziggurat's baked-brick stairway to its wind-scoured summit, you gaze over the royal cemetery excavated 90 years ago by Leonard Woolley, a Briton who recovered treasures rivalling those found in Tutankhamen's tomb in Egypt in 1924.

Very little work has been done here since, but British archaeologists are now back in the area despite the insecurity in Iraq that had kept them - and all but the most adventurous tourists - away from one of the world's oldest cities.

Brushing the caked dust from their clothes, Jane Moon and Stuart Campbell arrive back in Ur from another day of digging in a smaller settlement at Tell Khaiber, 20 kilometers away. "We have some idea of what we've got. It's very large, it's got to be a public building, perhaps a temple," says Moon, who first worked in Iraq fresh from university in the mid-1970s. "The next thing is to understand how it works."

Moon, co-director of the dig with Campbell and her husband Robert Killick, says the structure dates to the early second millennium BC. Pottery shards indicate that people occupied the site 1,000 or even 2,000 years before that.

This is a relatively tranquil corner of Iraq, but the authorities provide armed guards to shuttle the British team to Tell Khaiber and back to the dig-house at Ur every day. "We have to have security wherever we go, but hey, you know it's worth it. This place is fantastic," says Moon. A decade after the U.S.-led war that deposed Saddam Hussein, foreign visitors need official permits and an armed escort to pass the army checkpoints barring access to Ur.

The site is a potential magnet for tourists in the heart of Mesopotamia, where urban dwelling, writing and central state power began, but few come. Dozens of white golf buggies meant to ferry them around wait idly in the Ziggurat's shadow.

Just beyond the perimeter of the ruins lies Tallil air base, once bombed and later occupied by the Americans. Nearby is the gritty town of Nasiriya, through which invaders surged on their way to Baghdad in 2003. Ur escaped serious war damage.

The British team and an Italian one working at a Babylonian town in Abu Tbeira, 19 kilometers from Ur, are the only international digging ventures now in Iraq outside the Kurdish north. "This part of southern Iraq, ancient Babylonia, Sumer and Akkad before that, is probably the most important place in the world from the point of view of the origins of civilization," says Moon, wearing a white headscarf against the sun and dust. While it may conceal Iraq's oil wealth, the desert looks just as unsuitable for cultivation today.

Even by the Euphrates, salination has ravaged the soil. Yet thousands of years ago, successful farming was the bedrock of sophisticated city-states such as Ur and the powerful kingdoms in which they were sometimes welded together. "The key to a lot of the functioning of society was the very rich agriculture and the concentration and control of that surplus to support priests, temple personnel, the hierarchy in general, armies and specialist producers of metalwork, pottery and everything else that made up the complete economy,"
Campbell says. "It was an enormously bureaucratic society," he says of Ur at its zenith in 2,600 to 2,500 B.C.; a description that also fits modern Iraq. "Written records were being used to track goods being moved around, to communicate over long distances. The British team uses chemical analysis of pottery for insights into diet, drink and cookery, as well as the technology used to produce it.
Such techniques also help trace the origins of the stone, metal and wood imported to a region naturally lacking in such materials. "We look at environmental material, little pieces of bone, seeds, to try and reconstruct the economy, to find out what people were cultivating and how they cultivated it," Moon says.

Woolley was more focused on uncovering buildings than on such micro-analysis. His finds which include jewellery, daggers, lyres and other artworks crafted in gold, silver, bronze, lapis lazuli and carnelian; riveted public attention at the time.

Many of these came from 16 "royal" graves, where he found "death pits" containing the remains of attendants apparently killed to accompany their kings and queens into the next world.
One held the neatly laid-out bodies of 68 women and six men.
Woolley, aware how publicity could help raise vital funds, played on Ur's presumed status as Abraham's native city, and linked evidence of an inundation there to Sumerian tales of a great flood on which he said the Bible story of Noah was based.

These ideas have been contested, but they helped produce a flow of distinguished visitors to the dig from 1924 to 1932, among them Agatha Christie, then a 38-year-old divorcee who was to marry one of Woolley's assistants, Max Mallowan.

Based on her experiences there, Christie wrote "Murder in Mesopotamia" in 1935, in which the archaeologist in charge is modelled on Woolley, and the murder victim, a woman by turns charming and imperious, on his formidable wife Katharine.

Asked if any aspiring women crime writers visited the present dig-house at Ur, Campbell grins: "Not so far, but if it happens, maybe that could be a source of sponsorship as well."

The Ur project is backed by Iraq's State Board for Antiquities and Heritage, the British Institute for the Study of Iraq and the University of Manchester, plus private donors.

Woolley's dig was sponsored by the British Museum and the Philadelphia University Museum, which house many of his finds. Gertrude Bell, the British archaeologist and imperial administrator who founded the Iraq Museum in the 1920s and became head of antiquities, ensured many of the finest artifacts stayed in the country whose borders she helped draw.

Under a 1932 antiquities law, foreign archaeologists must turn everything over to the Iraq National Museum.