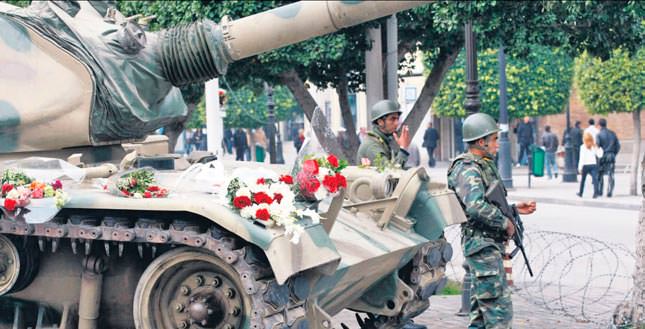 Tunisia's president lifted a state of emergency in effect since the 2011 uprising that ousted dictator Zine El Abidine Ben Ali, his office said yesterday, despite a string of recent jihadist attacks

Tunis - Tunisia has been rocked by sporadic violence since the Jan. 2011 revolution, which ignited the Arab Spring across North Africa and the Middle East. "The President and Commander-in-chief of the armed forces, Moncef Marzouki, issued a decree lifting the state of emergency in the whole country on Wednesday, March 5, 2014," his office said. In November, Marzouki extended the emergency rule for eight months, meaning it has ended four months earlier than scheduled. The end to the state of emergency "does not limit the capacity of the security services to implement the law and does not preclude any request for military support should it be needed," said the presidency. This "will not bring about changes in the implementation of laws and policies in place in the country, including those concerning military operations areas and border buffer zones."

Last year, special military zones were established on the Algerian and Libya borders, where the authorities say armed groups are active. Social discontent has often led to violence, especially in the impoverished center of Tunisia, where a street vendor set himself on fire more than three years ago in a desperate act of protest that launched the uprising.

Despite this, security and military affairs expert Hyakel Ben Mahfoudh said the lifting of emergency rule was long overdue. "The state of emergency is for extremely unstable situations, or when state institutions are in imminent danger, or when there is a popular uprising," he said.

Emergency rule amounted to "a restriction of rights, freedoms, the movement of people and goods" as Tunisia's political crisis was ending and security conditions improving. "The presidency is being pragmatic, because in any case it has been a long time since [the emergency law] was strictly enforced," he added. Much of the deadly violence witnessed in Tunisia since the uprising has been blamed on Ansar al-Sharia, a hard-line Islamist movement accused of having links to Al-Qaeda.

The government has said Ansar al-Sharia was behind the separate assassinations last year of two secular politicians, killings that plunged Tunisia into political turmoil and forced the Islamist-led government to quit.

The group never claimed responsibility for those or any other attacks. For more than one year, the security forces have been battling Islamist militants hiding out in the remote border regions of western Tunisia, notably in the Chaambi Mountains. In some of the latest bloodshed, five gunmen, including Algerians, killed two people and two policemen near the Bulla Regia Roman ruins in western Tunisia on Feb. 15. But the political situation has stabilized, with Tunisia putting in place a consensus government and a new constitution.

During a visit to Tunis last month, U.S. Secretary of State John Kerry said the country could become a model for others emerging from long-term autocratic rule.
RELATED TOPICS