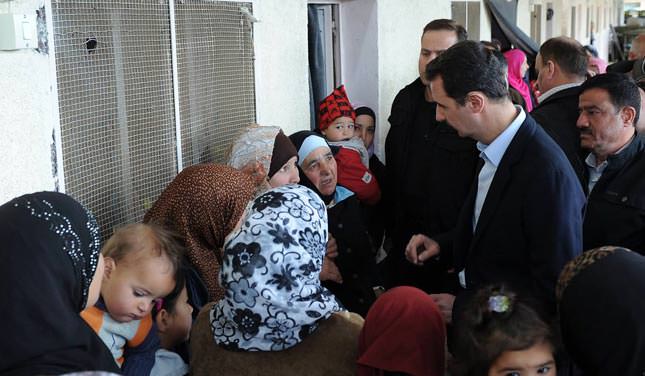 Regime forces killed nine people in the outskirts of Damascus, six in Daraa, four each in Aleppo and Idlib, two in Raqa, and one each in Hama and Homs, underscored the network.

The town is considered a strategic gateway to Damascus and has seen frequent clashes between the army and rebels. Control of the town and its adjacent industrial park remain contested, the Syrian Observatory for Human Rights said.

Assad rarely makes public appearances and most of those have been within the confines of the capital. He was last reported at a public event in January.

Assad is expected to seek a new term in a presidential election planned for the middle of the year, despite the raging conflict which has killed more than 140,000 people since March 2011.

Meanwhile, a European Union court has upheld sanctions against the sister of Syrian President Bashar al-Assad, arguing yesterday that her family links justify the measures. Bushra al-Assad had appealed against an EU asset freeze and a ban on entering the bloc's territory, arguing that she is a non-working mother and holds no public or economic position. The EU applied sanctions to al-Assad's sister and other close relatives in 2012, in an effort to ratchet up pressure on the regime.

The court recognized Wednesday that the EU's sanctions restrict Bushra al-Assad's right to property and affect her private life, but argued that this was justified to uphold the "protection of civilian populations in Syria."