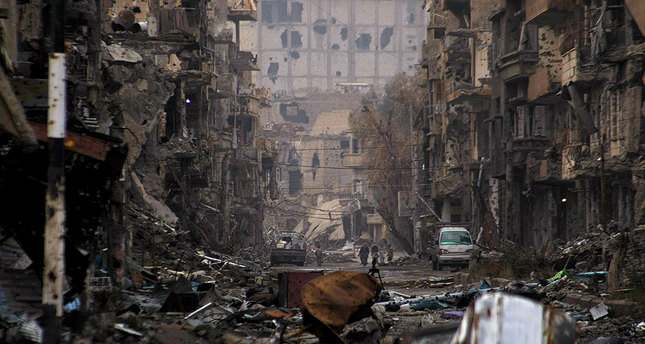 In the fourth year of Syria's conflict, the army seizes the Yabrud stronghold ousting civilians and activists

"Our armed forces have full control over Yabrud in Damascus province and are combing through the town and removing explosive devices," state television said, citing a military source.

It broadcast images of dead fighters and its correspondent on the ground said traffic was moving normally along the nearby highway that links the capital Damascus to Syria's third city Homs.

Rami Abdel Rahman, director of the Syrian Observatory for Human Rights NGO, said government troops were in control of "most of the town, but fighting is still ongoing".

Opposition sources said civilians and activists in the town had fled overnight into neighbouring Lebanon.

And Syrian state television said the army was targeting "rebels" fleeing Yabrud between the village of Fleita in Syria and the town of Arsal just across the border in Lebanon.

The fall of Yabrud comes after months of Syrian army operations in the strategic Qalamun region, north of Damascus, where the town is situated.

Late last year, the army captured a string of nearby towns -- Qara, Deir Attiya and Nabuk -- as it extended its control in a southern sweep along the Damascus-Homs highway.

It then turned it sights to Yabrud, which has been a rebel bastion since early in the Syrian uprising that began in March 2011.

Yabrud was once home to some 30,000 residents, around 90 percent Sunni Muslim and 10 percent Christian.

The army's capture of Yabrud comes a day into the fourth year of Syria's conflict, which began in March 2011 with peaceful anti-government protests but has spiralled into a brutal civil war.

More than 146,000 people have been killed, according to the Observatory, a Britain-based monitoring group and NGO, and millions have been displaced.

The UN's refugee agency says nine million Syrians have been forced from their homes, creating the world's largest displaced population.

More than 2.5 million Syrians are registered or awaiting registration as refugees in neighbouring countries, and in excess of 6.5 million people are displaced inside the country.