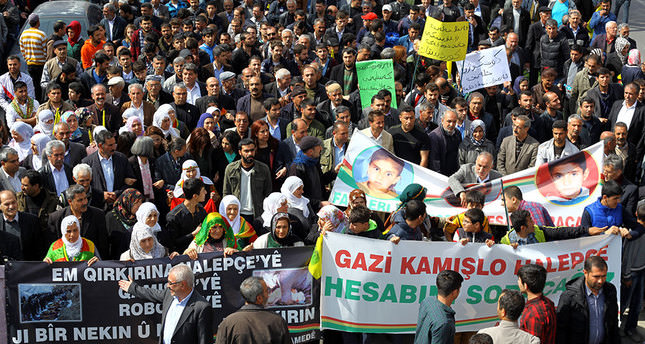 Memorial ceremonies were organized in Halabja, Irbil, Sulaymaniyah, Duhok and Kirkuk. "The city vanished after the chemical attack," said Halabja's Governor Goran Edhem. "Thank God we stood up as people and now we are witness to days when Halabja is a province again."

Thousands of people chose to go by foot to the city, from all regions of Iraq and even neighboring Iran. "Unfortunately, the world has not sincerely condemned the massacre. We want this massacre to be accepted as genocide," said Ahmet Eminzade, the spokesperson of a group that walked for four days, from Bane in Iran.

Some 5,000 were killed and 7,000 injured when Iraq's then President, Hussein, ordered a chemical attack on the city on March 16, 1988.
The attack on the town took place at the end of the eight-year Iran-Iraq war as part of the "Anfal" campaign that targeted mainly the Kurdish population in northern Iraq. It was the largest chemical weapon attack targeting a civilian population in history. That morning, Iraqi warplanes flew over the city and dropped chemical weapons on the thousands of unsuspecting people living there.

There are three martyrs' cemeteries in Halabja.

In one of them, there are 1,500 bodies, 440 bodies are buried in the second one and the third has 24 bodies buried one on top of the other. The rest of the victims remain missing. These cemeteries, which were arranged by the survivors of the massacre, have been turned into mausoleums frequently visited by the local people as well as the relatives of the victims. At the entrance of the cemeteries, it is written "Baath Party members cannot enter!"