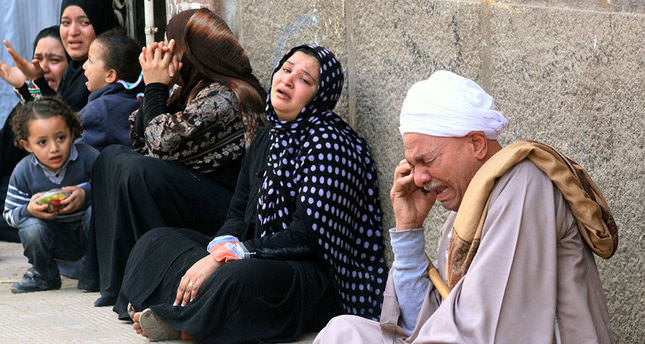 ISTANBUL — A criminal court in the Egyptian province of Minya yesterday sentenced 529 supporters of ousted President Mohamed Morsi to death and cleared 16 others on charges of inciting violence and attacking police. The verdict was sent to the grand mufti, Egypt's highest religious authority, for approval.

After the trial, the lawyers said, "We were not allowed to present a proper defense before the judgment was made."

The trial involved more than 1,200 supporters of ousted President Mohamed Morsi and Muslim Brotherhood members who faced a range of charges. Concerning the court decision, Foreign Minister Davutoğlu said, "This decision shows the antidemocratic and illegal approaches of the current Egyptian military regime following the coup. If 529 people have been sentenced to death in a country, then one should ask this question: Who will give an account of the people who died at the Square of Rabia-tul Adeviyye? We feel very sorry about recent developments. We are always on the side of Egyptian people. We believe in their prudence. This is because a democratic system with public sovereignty will urgently have to be established in Egypt. However, the recent death sentences show the Egyptian regime is far away from democracy."

Speaking on the issue, Ahmet Yusuf, a Turkish representative of the Muslim Brotherhood in Egypt and SETA expert said, "The final decision of the Egyptian court in Minya, the southern province of Egypt, is entirely illegal. They are charged with murdering police officers and inciting separation among the public, which are all unfounded. These people were taking part in a democratic and peaceful demonstration. This was an antimilitary regime demonstration of unarmed people. It is unreasonable to arrest 529 people for attacking a police officer at the same time. The pro-coup judges did not allow defendants or lawyers to present a proper defense with evidence. Among the defendants, there was Mohammed Badie, the Supreme Guide of Muslim Brotherhood. The ongoing social unrest in Egypt will become more complicated due to the recent unfair death sentences."

He added, "The court decisions are similar to the ones taken during the military trials under the occupation of the U.K. 100 years ago. I am afraid to say that there is no political or judicial authority to preclude the implementation of the decisions."

Abdel Fattah el-Sisi, the commander-in-chief of the Egyptian Armed Forces, led a military coup after demonstrations erupted against Morsi and the Muslim Brotherhood, in July 2013. More than 1,000 people were killed in the subsequent crackdown. Most of his closest confidants were arrested and Morsi is facing four criminal trials on various charges.