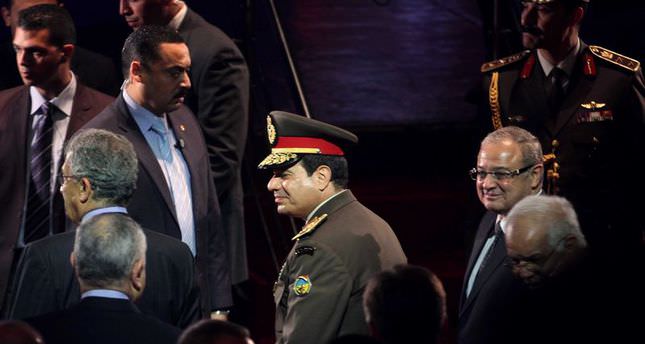 by reuters Mar 26, 2014 12:00 am
CAIRO — Egypt's military chief Abdel-Fattah el-Sissi has announced that he will run for president. In a nationally televised speech, el-Sissi, 59, said he has resigned from the military. Wearing military fartigues, he said it was the last time he would wear it and that "I give up the uniform to defend the nation" and run in elections expected next month. El-Sissi, who held the rank of field marshal, is considered almost certain to win. Under Egyptian law, only civilians can run for president, so his resignation was a required step.

As Sissi prepared to deliver a speech on state media, Egypt was reminded of the instability that has followed Mursi's ouster. A student was killed when police clashed with protesters at Cairo University, the Interior Ministry said, in a demonstration against a court's decision on Monday to sentence 529 supporters of the Muslim Brotherhood to death. The Health Ministry said eight people were also wounded.
Activists from a group called "Students Against the Coup" had called for the protest.

The Interior Ministry said Muslim Brotherhood members had blocked roads and clashed with citizens, fired gunshots and thrown petrol bombs and fireworks in an attempt to set up a protest camp near the university. It said a number of policemen were wounded with birdshot and burns.
Last Update: Mar 26, 2014 10:38 pm
RELATED TOPICS