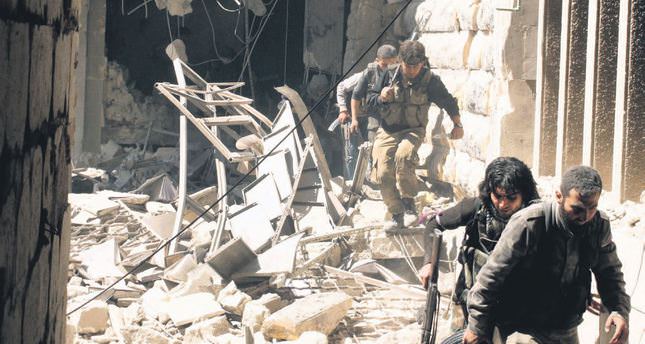 As the Syrian conflict rages, the United Nations estimates more than 140,000 people have been killed and millions displaced

ISTANBUL — What began three years ago as anti-government protests in Syria turned into a civil war only a few months later. Aware of the recent revolutions in Egypt and Tunisia, young children of the city of Deraa in southern Syria wrote quotes on walls such as "Assad, this is your turn!" Inspired by previous examples of the Arab Spring, the public will sparked a civil uprising. However, afterwards , it did not remain merely an activist movement, but turned into a military campaign.

Three years later, new radical groups emerged including the Islamic State of Iraq and the Levant (ISIL) and al-Nusra Front. The current picture in Syria is rather frightening. In addition to those killed, 2.5 million people have sought refuge in neighboring countries and 9.3 million people are in need of humanitarian aid.

Turkey did not stand idly by as this tragedy close to its borders unfolded and has in fact become a part of it. Initially, Syrian people poured into Turkey and were accepted as refugees to receive humanitarian aid. However, Turkey has already taken its share from the Syrian civil war.

Turkish aircraft on patrol were shot down by the Syrian Armed Forces and Syrian shells landed in Turkey. In order to minimize any other possible threats, the Turkish government is aiming to unseat the regime of Syrian President Bashar al-Assad. But who are the numerous groups opposing the government in Damascus?

The Syrian opposition is an umbrella term for groups and individuals fighting for regime change. Further, the National Coalition for Syrian Revolutionary and Opposition Forces is a coalition group of opposition groups.

At the start of the conflict, there were two opposing sides. The al-Assad regime was supported by Russia and Iran and the opposition by the U.S., Qatar, Turkey and European countries.


As time went on, some Salafi groups, including al-Qaeda linked al-Nusra Front, attempted to benefit from the current chaotic atmosphere. Supported by Gulf States, they became part of the war. Affiliated with al-Qaeda, these groups are not in favor of democracy, but a regime based on their controversial interpretation of Islam.

The Free Syrian Army (FSA): The FSA was established under the leadership of Commander Riad al-Asaad on July 29, 2011. It operates under the Syrian National Council (SNC). The members of the FSA are mainly composed of the military officers who left the Syrian State Army under al-Assad. The official number of its members is not known. According to the FSA's website, the army has 40,000 soldiers.

Al-Nusra Front: Al-Nusra Front emerged as an opposition group against the Syrian regime at the end of 2011 and came to the fore following a bombing attack against the Syrian General Staff 's building and Military Officers' Club at Aleppo. It operates in the northern parts of Syria, was placed on the blacklist by the U.N. Security Council and declared as a terrorist organization by the U.S. in Dec. 2012.

ISIL: ISIL was founded in 2006 under Abu Bakr al-Baghdadi in Iraq and has been active in Syria for almost two years. ISIL comprises both Syrians and foreign fighters. ISIL has fought to gain control over Syria's petroleum resources and controls the oil-rich region of al-Raqqah.

ISIL broke ties with al-Qaeda in June 2013 for a variety of reasons. First, ISIL attempted to order other opposition groups to follow its orders. Additionally, the group declared the FSA an enemy and was at odds with the official al-Qaeda affiliate, the al-Nusra Front.
Instead of fighting against al-Assad's forces, ISIL turned its attention to other opposition groups. The group penetrated into Aleppo's Azzez district close to Turkey and advanced toward Bab al-Salam border region, where it was repelled by the Syrian Islamic Front.