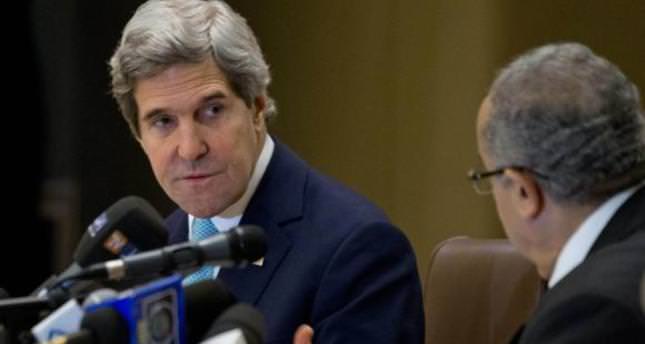 by Anadolu Agency
Apr 03, 2014 12:00 am
ALGIERS — US Secretary of State John Kerry Thursday demanded action from recalcitrant Israeli and Palestinian leaders, saying negotiations were at a "critical moment" and they had to choose whether to make peace.


Talks between negotiators are at sensetive stage although progress was made in overnight discussions, "We are urging them to find compromise that is critical for them to move forward," Kerry said during a visit to Algeria.
The negotiating teams from the US, Israel and the Palestinians have been trying to chart a path forward after both sides took steps Washington has criticised as "unhelpful".
Trouble ran through the talks at the weekend when Israel refused to release a group of Palestinian prisoners.
Kerry flew to Jerusalem on Monday and was trying to put the talks back on track. But his mission was jeopardized when Palestinians signed 15 international conventions that could give them greater leverage against Israel.
Last Update: Apr 03, 2014 6:00 pm