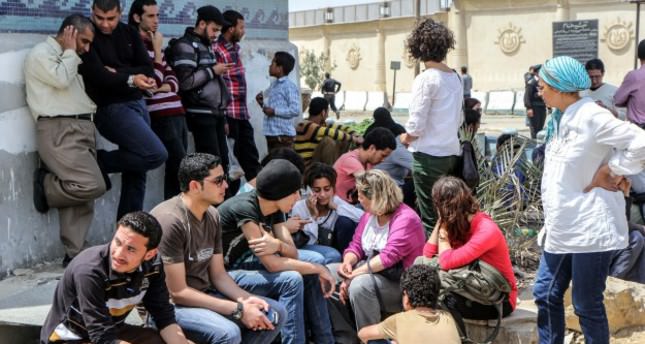 by AA Apr 08, 2014 12:00 am
CAIRO — Scores of Egyptian activists ended their sit-in outside the Ittihadiya presidential palace on Monday, giving a three-day ultimatum for interim President Adly Mansour to scrap an anti-protest law.
The activists said that they will stage a new-sit if the interim President failed to scrap the anti-protest law – which requires police permission for staging demonstrations – and order an amnesty for three jailed prominent activists.
"If the presidency failed to respond, we will join hands with other revolutionary groups to stage an open-ended sit-in outside the presidential palace," Nourhan Hefzi, the wife of activist Ahmed Douma, said.
The activists had gathered outside the palace to protest a court ruling upholding three-year jail terms for Douma, founder of the April 6 youth group Ahmed Maher and leading group member Mohamed Adel, they were found guilty of assaulting security forces and staging an unlicensed protest outside the Egyptian prosecutor-general's office in downtown Cairo last November.
Maher, Adel and Douma were among the young activists who spearheaded Egypt's January 2011 revolution, which ended autocratic president Hosni Mubarak's 30-year rule and supported last year's June 30 demonstrations, which paved the way for the July 3 ouster of Egypt's first freely elected president.
Last Update: Apr 08, 2014 7:03 pm
RELATED TOPICS