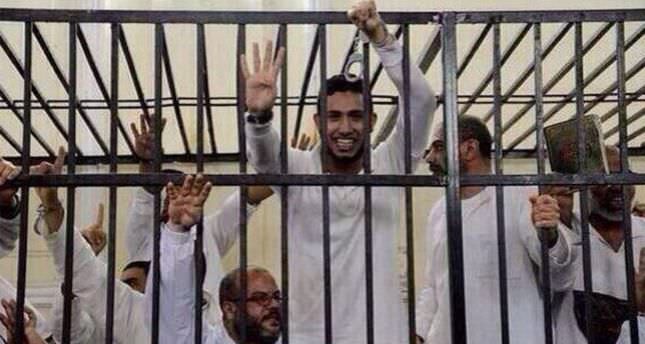 Death sentences against 529 Muslim Brotherhood members start to draw international attention, with activists on the social media initiating a campaign for the annulment of the severe punishment

ISTANBUL — Reactions against the decision of the Egyptian court on the sentencing of 529 supporters of ousted president Mohamed Morsi's Muslim Brotherhood to death escalated. A demonstration campaign began on social media with the hashtag, "World silent for execution in Egypt."

The hashtags were immediately shared and people urged the Egyptian authorities to cancel the sentence. In a trial in Minya, south of Cairo, 529 supporters of Muslim Brotherhood were found guilty of inciting violence. The court acquitted 16 defendants. The death sentence was sent to the grand mufti, Egypt's highest religious authority, for approval. In his statement, the head of the Minya Lawyers Association Tarek Foude said there were no lawyers or defendants present when the court decision was announced. "The death sentence given by Egyptian court on March 24 for 529 persons who were opponents of the military regime proves the cruelty of the current government," said Middle East expert Mustafa Sıtkı Bilgin. "This decision was announced after only 20 minutes of trial, showing that there is no justice, freedom, or human rights in Egypt and exposes the dictatorial character of the current regime in Cairo."

Bilgin condemned the current regime. "[Field Marshal Abdel Fattah] al-Sisi's regime is actually worse than the dictatorial regime created by Gamal Abdel Nasr during the 1950s," he said. "This was because Nasr never turned guns against the civilian population. Nasr's regime only punished his political opponents.

But for the first time in modern Egyptian history, Egyptian soldiers opened fire on the civilian population and about 3,000 people were killed by al-Sisi's regime since the fall of Mohamad Morsi last year. This also showed the duplicity of Western politics because this action taken by the Egyptian court is full of violations of international human rights, freedom and justice."

He added, "No strong condemnation appeared either from the U.S. or Europe. Even the Islamic world also remained silent. Only Turkey raised its voice."Bilgin emphasized Egypt's actions would further sever Turkish-Egyptian relations. "As for internal politics, if these death sentences are carried out, this would generate additional public reactions that would result in more troubles and confusion in Egypt. As the Egyptian economy and politics face many new problems, this will eventually bring about the downfall of the military regime sooner or later, just as it had happened to the [Hosni] Mubarak regime previously."